"Whenever we are allowed outside into the jail courtyard, I look out at the flocks of geese flying overhead and think that maybe, just maybe, some of those geese are ones that are still alive today because we warned them. And I think, yes, they were worth it."

These were the words of SHARK founding president Steve Hindi during a period of incarceration resulting from a hunter interference charge. Steve Hindi, the man who, eighteen years ago, would have been more likely to be behind the barrel of gun instead of in front of it.

In honor of his achievements in animal protection over the past 17 years, and for many more to come, Steve Hindi was inducted into the Animal Rights Hall of Fame at the 2006 Animal Rights conference.

Steve Hindi is one of a kind. His freight-train determination, tireless spirit, and tell-it-straight attitude make him a unique asset to the animal movement. We, as warriors in the same fight, and animals everywhere are lucky to have Steve Hindi on the front lines. 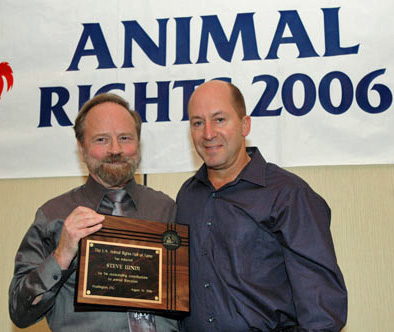 After hunting for most of his life, Steve turned around when he witnessed a horrific example of live pigeon shooting. From that point on, compassion, not killing, became his life goal.

Read about Steve's conversion from hunter to activist in "I was a fish killer".

As volunteer president of SHARK today, Hindi has led the organization to numerous victories for the animals: statewide bans on horse-tripping and live pigeon shoots in Illinois, shutting down various hunting clubs and canned hunts across the country, international exposure of the truth behind rodeos and bullfighting, helping to prosecute domestic animal cruelty cases... This list goes on and on and continues to grow today.

The History of SHARK

SHowing Animals Respect and Kindness (SHARK) was founded in 1993 by former hunter Steve Hindi. As a "sportsman," Steve hunted many species of animals both on land and in the sea. He killed for thirty years until the life-shattering day when, en route to shark hunting in the Atlantic Ocean, Steve attended the infamous Hegins pigeon shoot in Pennsylvania.

The slaughter of thousands of nonhuman victims, and the involvement of children in the horrific killings, was too much for Steve to tolerate. He vowed to stop pigeon shoots, and went on to dedicate his life to ending the abuse of all animals.

SHARK is a non-profit organization with supporters around the US and beyond. SHARK receives no government funding and completely relies on donations and grants to work on issues ranging in scope from local to worldwide.

With a small core of volunteers, and a staff of five, SHARK battles tirelessly against rodeos, bullfighting, pigeon shoots, turkey shoots, canned hunts (and all hunting), circuses, zoos, and marine parks... any issue that involves violation of the innate rights of living creatures.

SHARK also conducts animal rescues and education projects. Steve Hindi has an open invitation to debate "the opposition." Because of his domination of past debates with animal abusers, however, it has been years since the opposition has taken him on.

SHARK's victories are hard-fought and proudly won. Of our many successes, some of the more noteworthy are listed below. For more detailed information about any of these individual issues, click on the title.

Alone Against the Rodeo

Click here to watch the award-winning 2001 30-minute investigative documentary, Alone Against the Rodeo, which tells the story of SHARK's efforts to expose the Rodeo Mafia, and profiles SHARK president Steve Hindi. The film won the Brigitte Bardot International Award for its hard-hitting story of cruelty and corruption in the world of American rodeos.

Bizarro creator Dan Piraro created this illustration after learning
of the FBI’s attempt to smear SHARK. (click to enlarge)

SHARK is determined to eliminate the cruelty of rodeos and live pigeon shoots. Also the cruelty found at circuses and the indefensible torture of bullfights with the continuation of video exposés, legal action and sponsor pressure.

SHARK hopes to make legal challenges across the country against the cruelty of rodeos and live pigeon shoots using existing cruelty regulations which we believe are currently ignored, and simply need to be enforced.

In addition, our Tiger Truck, a 4-screened mobile video vehicle, educates and mobilizes people against issues such as the meat industry, corporate cruelty through sponsorships of rodeos, bullfighting and circuses, and the horrific fur industry.

We would appreciate your support on this exciting journey toward to more peaceful and compassionate planet. You will not find a more effective, efficient or dedicated organization. We look forward to having you as part of the SHARK Team as we press on for the rights of nonhumans worldwide.

SHARK Declaration in Support of Non-Violence

SHARK's mission is to nonviolently battle animal abuse whenever and wherever possible. We consider those who commit terrorism in the name of animal protection to be among the greatest threats to future gains for nonhumans.

SHARK stands against terrorism wherever it is to be found, no matter what cause it hides behind. This especially includes terrorism hiding behind the cause of animal protection.