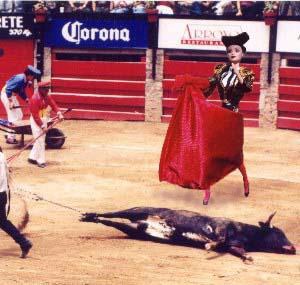 After a hard-hitting campaign spearheaded by SHARK, Mattel stopped production of the "Spanish Barbie." This doll, dressed as a matador, glorified the despicable murder of bulls, to young children no less! After a public campaign by SHARK that took the harsh reality of bullfighting to the streets, first by using the "Slam Van", a van with three televisions, and then the Tiger Truck, Mattel heeded the public outcry. The makers of the Bullfighting Barbie assured SHARK there would be no more.

Below is information on the Bullfighting Barbie from the days of the active campaign.

Mattel should be ashamed of its support for perhaps the worst organized torture of animals in the world.

In these pictures, Mattel’s Bullfighting Barbie is superimposed over pictures of very real bullfights.

Despite appeals from animal protection organizations from around the world, as well as parents concerned about the message the doll would give the children, Mattel refused to discontinue the product.