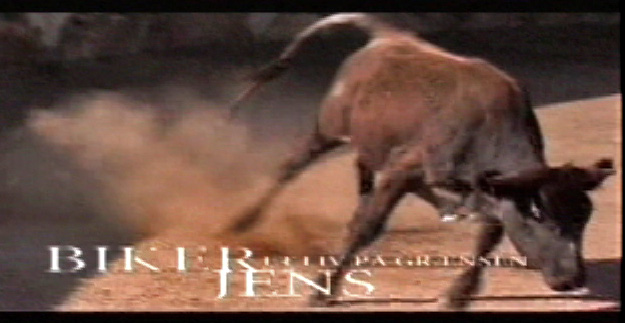 In August 2003 SHARK collaborated with Danish television celebrity Jens Romunstad, better known in Denmark as “Biker Jens,” in the making of a story exposing bullfighting cruelty that would become the Brigitte Bardot International Award winner at the 2004 Genesis Awards.

“Biker Jens: A Life on the Edge” is a very popular reality television show watched by 10 million people in Denmarkand Norway. In each episode, Jens thoroughly explores a single topic by immersing himself in that topic. When he examined Chippendale dancers, he became a Chippendale dancer. When he looked into homelessness in America, he spent time living as a homeless person on the street.

When Jens decided to devote an episode to bullfighting, he contacted Coleman Cooney, a bullfighting blood and gore devotee, who's the owner and operator of a so-called bullfight school near San Diego. Jens then scheduled some lessons in the “art” of bullfighting. Being a responsible journalist intent on producing a fair and balanced story, Jens also contacted SHARK in order to hear the other side of the bullfighting controversy.

SHARK investigator Pat Vinet met Jens in San Diego in between his sessions at Cooney’s "school." She explained to him what bullfighting was really like from the point of view of its victims and illustrated its hideous nature through video shot by SHARK investigators in Mexico.

Jens was sickened by the graphic images of suffering animals. It should be mentioned that Jens Romunstad is a large and very strong man who loves extreme sports and dangerous challenges. He doesn’t shrink from taking risks, and feels contempt for cruelty and cowardice.

Rightfully troubled by the revelation, Jens confronted Cooney with his concerns. During the course of this interview, no animal rights advocate could possibly have made Cooney appear more contemptible, immoral or dishonest than Cooney did himself. He displayed a complete absence of conscience regarding the torture that is bullfighting. It was truly a masterpiece of self defeat and probably contributed more toward Jens' garnering of a Genesis Award than any other scene in the nearly hour-long program.

SHARK would like to express its appreciation to Jens Romunstad and his crew for their compassion and professional integrity. They could have turned the show into a bullfighting “fluff piece” as so many “journalists” before them have done. Instead, they exposed it for the unspeakable cruelty and inexcusable barbarism that it truly is.

Please read Jens' comments as he accepts the Brigitte Bardot International Award at the 2004 Genesis Awards in Beverly Hills, California.

I’ve never been so proud in my life!

Foremost, I’ll like to thank SHARK, especially Steve Hindi & Pat Vinet, for assisting my program and even nominating it. I have the deepest respect for you. I would like to thank my crew, especially Rasmus Steentoft, after we decided to make television no one had seen before, it somehow got easier. A big thanks to TV3 Denmark, and to Nordisk Film, for producing it. Thanks to my wife for accepting, that I have to be this way and do the things I do.

The people that know me, and that would be a tiny crowd in this room, would know, that I’ve done a lot of things in my life that made me scared. Maybe more than most people.

But NOTHING in my life has scared me as an event where torture and killing is entertainment. An event where spectators cheer at the sight of blood, pain and misery. A celebration of evil.

They call it bullfighting, but I can assure you: It’s no fight at all. It’s pathological cruelty based on 100 years of experience in stretching the moment of dying, through undescribeable pain, for our entertainment only. I don’t want to be entertained that way. And the people that do, I’ll call sick, perverse and twisted in their heads!

The bullfighters themselves are celebrated as being fearless. If that was true, why do the bulls have to be speared and half dead of bloodloss before a bullfighter dares to fight it? Are they scared? These macho-heroes in spandex-pants?

Sometimes a bull is spared, if the judges thinks it fought very well. If it doesn’t die from the wounds and recovers, it will never fight again. By then it will know not to attack the red cloth, but the little, impotent man behind it. And therefore the bullfighters don’t dare to fight them more than once. Now it gets even more sick: Instead they breed on it. So the bullfighters can torture and kill the bulls offspring. The bull's babies.

What if the bulls can sense that? What would you do? Fight and hope only to be wounded, or hope to die, to save your babies from the same torture?

I’m a human, I don’t have to make that choice. But I know what I would choose. But I also know, that the bull can’t choose at all!

We got to help! If we can put people on the moon and land on Mars, I’ll be damned if we can’t stop this sickness on earth!!

I accept this prize. Thank you!