Great article in the November 15th, 2009 Toledo Blade exposing Denicola and his deer killing company.
White Buffalo was at the center of controversy when SHARK filmed the 2004 undercover video footage near Akron, just as it has been in several other states where it has culled deer, such as California, New Jersey, Missouri, Texas, Virginia, Minnesota, and Maine.

You can read the entire article Here.

As of 2013 the Deer Slaughter is Ongoing

Our understanding is that the cruel annual slaughter of deer in the MetroPark's system continues to this day. Here is a link to MetroParks website where they admit to the slaughter (about half-way down the page).

After feeding the deer for some time to make them tame and unafraid of people, over one hundred victims were gunned down by shooters who were apparently as incompetent as they were merciless.

SHARK secretly installed surveillance video cameras to document the killing. The cameras quietly recorded for a week before they were discovered and confiscated by Metro Parks rangers, but by that time the evidence of cruelty and abuse was clear.

SHARK supplied video footage to the Akron/Cleveland media exposing the cruel slaughter. Claims that the deer would be "euthanized" by highly skilled sharpshooters were exposed as lies when SHARK's undercover video cameras documented animals shot, but left alive to suffer. The deer were shot only once, even though in many cases they did not immediately die.

To counter the Akron MetroParks lies, SHARK went out and interviewed four practicing Veterinarians in the Akron Area. Here are their statements:

Hi, my name is Dr. Bennett Fagin, and I'm a veterinarian, a licensed veterinarian in the state of Ohio.

I've been a veterinarian for 22 years. I’ve just finished watching video footage of a deer kill in the Summit Metro Park, and I've watched the footage from before the deer was shot until the deer was dragged off of the field and in my professional opinion; the deer was not killed with the first shot. The first shot was the only shot, and I do not understand why an additional shot wasn't rendered after the deer was shot the first time.

The animal actually thrashed when its leg was grabbed and in my professional opinion, the manner in which this animal was shot is inhumane. I think the animal should have been shot again, and someone at close range should have placed a shot either in its head or through its heart and humanely killed it.

My name is Dr. Alice Jeromin. I am a registered veterinarian in the state of Ohio for the past 15 years. I just had the opportunity to view a shot of the deer kill in the Summit County Metro Park.

The circumstance was that the deer was apparently shot somewhere in the upper body, left for dead and then when approached by someone, started to fight and flail. They then put a plastic bag around his head in an effort to drag him off the field, and he fought the entire way.

In my opinion after seeing this video, after this deer was shot with one shot, that deer was not dead. What was done to that deer was extremely inhumane in my opinion. He was still alive, and that deer was suffocated apparently then by the person coming up and placing that plastic bag around his head.

I've viewed the videotape of the deer euthanization, and it is my opinion that the deer obviously was still alive when it was being dragged off with the plastic bag around its head. It should have been totally limp with no struggle. It probably could have been remedied by giving a second shot or a third shot in the skull, right when they realized that it was still kicking. Yes, the animals do move a little bit after being shot in the head, if they’re shot right, but not for that extended period of time that was shown in that pictorial.

I was once a hunter, and I have had the occasion to euthanize deer with a shot in the head, so I actually have experience in knowing how long an animal probably would twitch and kick and resist, and that was not the case here.

My name is Meg J. Baho, DVM. I graduated from the Ohio State University College of Veterinary Medicine in 1995 and practice animal medicine in the Columbus, Ohio area.

I just viewed the horrifying video footage. My opinion is as follows:

The first deer on the footage was shot, collapsed, and then appeared to have either conscious muscle contractions due to struggling and pain or perhaps violent post-mortem, agonal muscle tremors. The deer was then still for several moments. However, after the bag was placed on the doe's head, she was seen to have violent, flailing movements generalized through her body. This would not happen if she had been fatally shot the first time. These movements were not characteristic of normal post-mortem movement in any way, shape or form. She would not have post-mortem activity moments after being fatally shot induced by having a bag placed over her head. If the shooters were in that close of range, a fatal shot should have been administered. I cannot imagine why this didn't happen. If individuals involved in these cullings were interested in looking for diseases in her brain and central nervous system, she could have been much more humanely killed via a shot through her heart. There is no reason that I can imagine that she was not killed with another bullet.

Humane and safe alternatives to deer population control exist and should be employed in both rural and urban areas. This sort of killing only reduces the gene pool and only invites deer from surrounding areas to come in and take the environmental niche that was left behind after this "depopulation."

For local governments and government agencies, the issue is a political hot potato, with all involved attempting to dodge responsibility. The city of Akron, which enabled the use of firearms in two parks, claimed it had no connection to the killing. The Ohio Department of Natural Resources, Division of Wildlife, which issued the permit to kill deer, refused to meet with SHARK representatives or even view SHARK’s video footage. Yet, of all the tax funded governments and agencies running for cover, Metro Parks of Summit County stooped the lowest.

On March 4, SHARK held a press conference right in front of the Metro Parks administrative headquarters in Sand Run Park and invited Metro Parks spokespeople to attend the press conference to have their say. Predictably, no one from Metro Parks showed up, even though we were literally on their doorstep. Not project head Mike Johnson, not Chief Ranger Ray Dickson, not spokesperson Susan Fairweather – not anyone.

On the morning of March 5, SHARK received a tip about a dead deer found a short distance away from a bait site in Cascade Valley Park. The deer had a head wound consistent with a gun shot that was not quite on target. The deer had likely suffered for a long time before death occurred, and was fed on by coyotes, possibly before death. 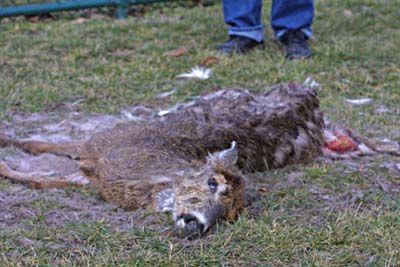 SHARK contacted the Cleveland FOX television affiliate, Channel 8, and a news crew was dispatched. After filming the deer, FOX called park rangers to inform them of the dead deer. Three rangers were dispatched, along with Metro Parks spokesperson Susan Fairweather. Fairweather walked to within approximately fifteen feet of the deer carcass, looked at it for a few seconds and immediately denied that the deer was a part of their deer management operation. She then refused further comment and stormed away. Even her own rangers seemed appalled at her brazen and ridiculous statement.

We don’t know why the deer are being killed in the Metro Parks. The deer are not starving. They are healthy, as is the park's ecosystem, and there is food and habitat for other animals. For the most part, people visiting and living around the deer love them and do not want them killed. There are some people arrogant enough to believe that deer should be killed, because they eat their flowers and shrubs, but fortunately most folks understand that moving next to wildlife means living with and appreciating them.

Upset at being portrayed in a negative light of their own making, Metro Parks has refused to return SHARK’s surveillance equipment, valued at over $5,000, even though Metro Parks' Chief Ray Dickson cannot site any rule that was violated by the undercover operation. Since Metro Parks has already been exposed for animal abuse and for trying to lie about and cover up that abuse, Metro Parks administrators must feel that adding thievery to the list of flaws was a minor matter.

Akron's Metro Parks of Summit County is an example of just how perverse, arrogant and utterly wasteful a government body can become. These people have no regard for animals held in the public trust or for how taxpayer money is spent. They are doing everything they can to keep the public in the dark by outright lying to them if need be. This is an agency whose leaders and administrators should be fired and replaced. These people are too far gone to fix, and the people of Akron deserve better.

Please help stop this ongoing cruelty by contacting the following officials and asking that the killing be stopped immediately:

Letters to the Editor (You must include your name, address and phone number to be considered for publication.)

Akron Beacon Journal
This email address is being protected from spambots. You need JavaScript enabled to view it.

Cleveland Plain Dealer
This email address is being protected from spambots. You need JavaScript enabled to view it.