This is the story of just one incident in Lake County, Illinois during the winter of 2000, as told by SHARK president Steve Hindi. One can only imagine how many untold stories of suffering have occurred: 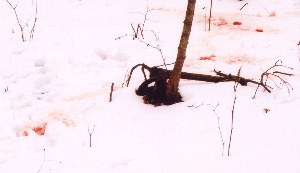 The blood trail of the wounded and abandoned doe.

On February 15, SHARK member Greg Campbell and I went to the Ryerson Woods Forest Preserve in response to citizen complaints regarding the county's "deer management program." We were on a trail used mainly for cross-country skiing when we came across a crimson trail. The sunlight made the frozen blood shimmer in the snow. The trail lead away from a shooting blind.

The blood trail was not from a dead animal being dragged by shooters, but from a live deer running wounded. It was obvious that the shooter had not bothered to pursue his victim as there were no human tracks, in spite of so much blood that even at night tracking the injured deer would have been easy.

We followed the trail to where the deer was hit, less than fifty feet from the blind, where there had been an explosion of blood. It was a shot that even a beginner should have been able to make. Had the shooter been even halfway competent, the deer would have fallen, instantly dead. But the deer didn't even go down, and instead bolted toward the imagined safety of the woods.

The tracks of the shooter revealed he had climbed down from the blind and gone to where the deer was shot. The shooter's tracks followed the blood trail for a very short distance -- less than 100 feet. The tracks confirmed that the shooter then abandoned his victim, and returned to the blind, apparently to continue his killing spree.

Next, we followed the trail in the direction the victim ran. It was easy to see where the wounded deer repeatedly stopped to rest and to give the intense bleeding a chance to subside. But the lifeblood continued to flow, and formed gruesome pools in the snow and ice. 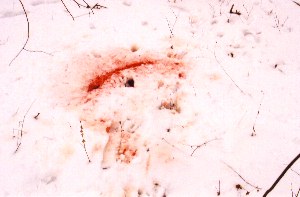 When she stopped, the badly wounded doe left puddles
of blood as evidence of her horrible suffering

Finally, approximately 200 yards from where the deer was shot we approached a densely wooded area, including many fallen trees. It was a place where a wounded deer would go lie down to rest and try to heal wounds. Here we expected to find the carcass of the dead deer, which would be irrefutable evidence of the incompetency of the shooter. But what we found instead will haunt us for the rest of our lives.

The victim was a beautiful doe. She struggled to get up from where she had spent the night and morning -- ten or more hours -- leaning against a large fallen tree in an effort to stop the massive bleeding that pumped her life out onto the cold white snow.

For a moment our eyes met. Those big brown eyes -- eyes that now expressed terror at being faced by the species who had tried to kill her. At the same time those eyes begged for mercy, and made a plea for help. Our contact lasted only seconds, but the effect on us will last forever.

Although the blood trail showed she was gravely wounded, she was still fast enough to elude our clumsy attempts to follow her. In so doing, she lost the last chance she had to get the help she so desperately needed.

We went back to the log where the doe had sought protection. The imprint of her body was clear from where the snow was melted. The large area of clotted blood on the log and on the snow underneath was sickening. All this pain and suffering from just one bullet from one careless, incompetent "sharpshooter."

Greg and I called local wildlife activist Davida Terry, who in turn contacted the media. Davida's husband Don brought both video and still cameras to document the blood trail, the shooting blind, the tracks, the log; the whole rotten tragedy. We were never able to find the doe. 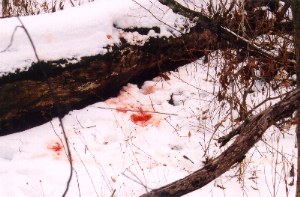 The resting place of the wounded doe where she lay for
approximately 10-12 hours before being discovered by
SHARK activists. Displaying an incredible will to live, the
tormented victim pressed her wound against the side of
this fallen tree in an attempt to stop the intensive bleeding.

When the reporters called, the staff of the Lake County Forest Preserve District took no responsibility. They claimed that no deer had been wounded -- no deer had gotten away from their killers. They even denied the blood trail, which had been witnessed by numerous animal advocates and reporters, and had been documented with still and video cameras. In spite of this wealth of evidence, the District issued a statement denying any involvement in the wounding of the doe.

We demanded an investigation into the shooting and the cover-up that followed, but all we received were more lies and cover-ups. This farce shows the character, or lack thereof, of the people involved in government wildlife slaughters. They claim to be caring professionals, but have proven themselves to be nothing more than irresponsible and abusive animal serial killers.

A wounded deer that left a trail of blood in the Ryerson Woods Forest Preserve in February was not the result of botched work by sharpshooters culling deer at the site, according to Lake County Forest Preserve District officials. Click here to read how the county tries to shift blame.