The Shame of Spain 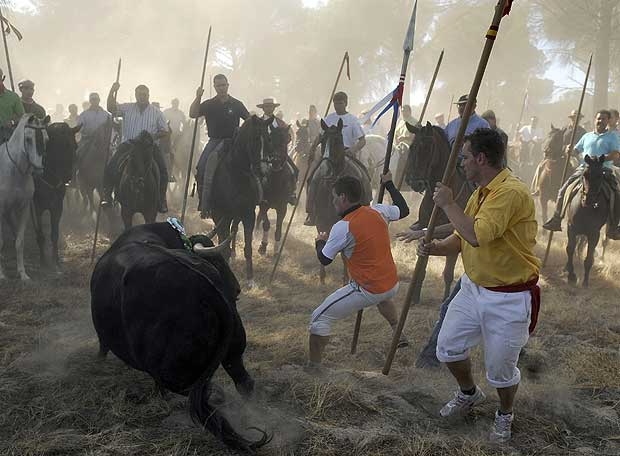 The annual “Fiestas Mayores” in Tordesillas take place in the second week of September. The “fiestas” or “feast days” are in honour of the patron Saint of the town and surrounding area, Our Lady, the Virgin of the Cliff. The bloodiest day is the Tuesday when the famous “El Toro de la Vega” run takes place.

This yearly spectacle with a bull and lances has been going for centuries. In fact it is an example of one of the most ancient “taurine” rituals, unique to Spain : “The Lancing of the Bull”.

This was one of the star attractions during the bull tournaments, before the introduction of bullfights, as we know them, during the XVIII century. Thus the organizers place a great deal of importance on the choice of bull who must weigh more than 500 kilos, have procreated, be some various years old and must be handsome.

At about 11 o'clock on the Tuesday morning, traditionally in the main square of the town, but more recently in a nearby street called San Antolin, the “Toro de la Vega” begins. The bull is driven down the street and then, on crossing the bridge, the bull faces his “fate”. On the other side of the bridge he is awaited by men on horseback and others on foot who carry lances and will not desist until they kill him; this takes place in the area called the “vega” – a plain scattered with trees. The rules laid down by the Tordesillas Town Council, and which the present-day torneo must comply with, basically state that the bull must only be lanced once it enters the designated area and that no vehicles are allowed into this area.

Update! In 2014 Activists were stoned by thugs while protesting this event. Click here to read more.

The youth who manages to give the thrust of his lance which actually kills the bull has the right to cut off his testicles and proudly parade them around on the end of his lance. (For the last few years this practice has not been allowed although some have tried to do it). The Town Council presents the winner with a gold badge and a lance made of forged iron.

“Every year, including this past September, one of the most bestial rituals takes place in the Kingdom of Spain : El Toro de la Vega of Tordesillas. It is one of those repetitive savage spectacles which crazed people give the pompous name of “traditional”, as if this word makes the event sacrosanct. The Roman circus was “traditional” for centuries in this country as were public exhibitions of people in the pillory. Fortunately we have got over these forms of barbarity.

However, to our shame, the “Toro de la Vega” still persists, a “fiesta” which consists of a hundred or more men armed with lances, harass the animal with their thrusting lances until the poor thing, bleeding profusely, riddled with holes, its flesh torn with the stabbing lances, can go no further and as he collapses someone sticks a dagger behind his head to then cuts off his testicles. This often happens when he is still alive, some witnesses have claimed. It is a slow form of torture, watched by a rowdy multitude of spectators, a sadistic form of fun for slaughters. And parents take their children to see and learn from this gruesome event. 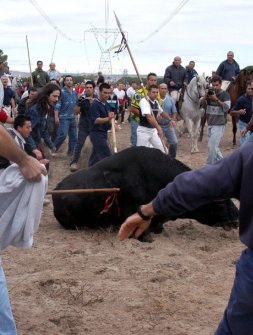 This indecent event has taken place for three centuries, except for some years when it was prohibited; what is incredible is that it was illegal until 1999 when the Junta de Castilla and Leon incomprehensibly legalized it. This seems to me to be very retrograde and the height of political stupidity. The National Association for the Welfare of Animals (ANPBA) has pleaded for the “humanization” of the “Fiesta” and handed in a document which proves that the Town Council of Tordesillas actually asked for permission for the celebration of this event, promising to make it more humane and avoid the use of any violence against the bull. The Town Council in fact admitted that the tradition does not require the bull to be lanced. Even so, there can be no tradition which justifies such monstrous cruelty; cruelty which contravenes all the legalities, including the Bullfighting Rules and Regulations, as well as contravening sense and compassion. Poor Toro de la Vega (and other such bulls in Arcos de la Frontera, Coria, etc. who have similar fates) who smells of blood and pain in this sinister Spain , anchored in the past.