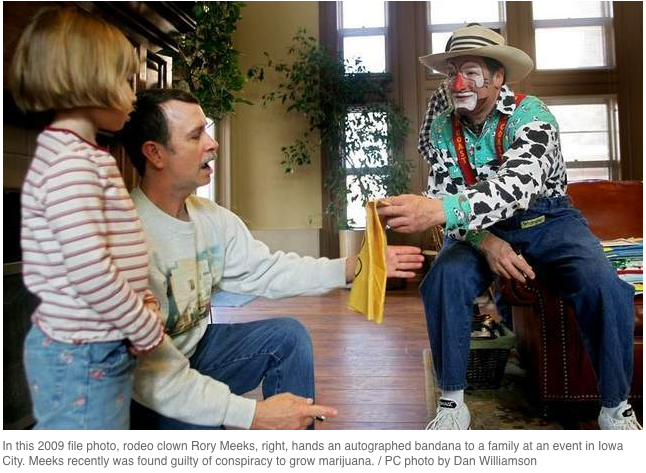 An Eastern Iowa rodeo clown who has performed in Iowa City was found guilty of conspiracy to grow marijuana.

According to the Iowa City Press-Citizen, Rory Meeks, 55, of Marion, was convicted on March 8 after a three-day trial in federal court in Cedar Rapids of one count of conspiracy to manufacture marijuana. He was acquitted of one count of manufacturing marijuana in April 2011.

According to a news release, evidence at trial showed that Meeks, who worked as a rodeo clown and bullfighter in local and national rodeos, conspired with others to grow marijuana in rural Jones County from 2004 through 2011.

The jury found that Meeks was involved in growing more than 1,000 marijuana plants between 2004 and 2011.

Meeks, who performed as a clown for prominent Iowa City-area charities, now faces a mandatory minimum sentence of 20 years in prison and a possible maximum sentence of life in prison, a $20,000,000 fine, a $100 special assessment, and at least 10 years of supervised release following any imprisonment.