Ty Murray calls himself the “King of the Cowboys.” Nobody can charge this clown with humility. After running from a debate challenge from SHARK president Steve Hindi, we also can’t charge Murray with having much in the way of guts.

World rodeo champion Ty Murray has been cited for chasing an elk with a snowmobile and then jumping onto the animal at a Colorado ranch last January. 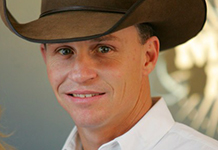 Murray, of Stephenville, Texas was making a celebrity appearance at a Denver western wear store Saturday when officers handed him tickets fining him $1,233 for harassing wildlife with a snowmobile and illegal possession of an elk.

The two misdemeanors also carry enough violation points to revoke hunting and fishing privileges for up to three years.

The 13-month probe of Hill's business, Troublesome Creek Guide and Outfitters, ended in February 1994 when wildlife officers seized photographs, videotapes and other evidence from Hill's home.

Some of the photos show Murray sitting on or beside a cow elk that is lying down, said Robert Thompson, the wildlife division's Hot Sulphur Springs district manager. Informants said some of the individuals present when the pictures were taken had bulldogged the elk.

Murray was one of 66 witnesses in the case against Hill, who has been charged with eight felonies and 30 misdemeanors, many of them involving the alleged poaching of elk, black bear and other wildlife.

The Denver Post reported that Murray said he knows Hill, but did not know why he would be listed as a witness in a case against him. He otherwise declined comment on the investigation or the tickets he was issued.

Murray has won the all-around rodeo cowboy crown for six consecutive years, a streak that ties the record set by Larry Mahan. The designation is based on how much money a cowboy wins in a rodeo season.

Murray, clearly a legend in his own mind, wrote a book called “King of the Cowboys.” In it he displayed such arrogance that these excerpts were among the reviews of his book on Amazon.com:

“In his self-patronizing autobiography, this spoiled rodeo superstar proves to be a redneck in the worst sense of the word, not a "cowboy" as he claims.”

Another reader expressed himself this way:

“Ty Murray is certainly not humble. If braggadocio is your thing, this is your book. If tough is chasing down female elk on snowmobiles and then riding them, Murray is one tough dude. Despite what he claims, I don't think that is "the cowboy way." It was at this point in the book that I threw it in the garbage. Rather than buy this book, I suggest you send the money to some organization that protects wildlife from people like Ty Murray.”

SHARK has a new title for Ty Murray – “King of the Creeps.” It’s not enough that he abuses animals in rodeos – he just has to find more victims. By the way, an exhausted elk in deep snow has a good chance of becoming a dead elk. We don’t know if Ty is too ignorant to realize this or if he simply doesn’t care. In any case, Ty’s supposed toughness was exposed as fraudulent when he ran from SHARK’s president.

(By the way, Ty, that debate challenge is still open)