A campaign spearheaded by the Rodeo Education Campaign (REC) of Philadelphia, Pennsylvania.

In a grand example of how a committed, localized effort, can make a direct impact against rodeo abuse, Gary Barbera Dodge has withdrawn sponsorship to the Liberty Pro Rodeo after the launch of the "Barbera Brutality" campaign.

A half an hour into the first on-site demonstration at Gary Barbera Dodge, the operations manager came outside to inform the REC demonstrators that the business had withdrawn their support of the rodeo and handed over this statement.

When the 2007 Liberty Pro Rodeo mistakenly printed a Gary Barbera Dodge ad in their rodeo program, there was some immediate confusion as to Barbera's position with rodeo sponsorship. The REC immediately moved to clarify the situation and contacted Gary Barbera Dodge. That has since been cleared up and Barbera Dodge has further confirmed their commitment to not support cruelty with this letter. 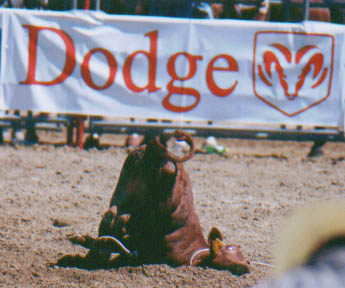 Thank you to everyone who participated in making this campaign a success! Please contact Gary Barbera Dodge and congratulate them on their compassionate choice:

Without its sponsors like Dodge and Coca-Cola, both pictured here, the rodeo industry could not survive. In his terror and torment, this horse has bucked so blindly and violently that he has fallen. Many rodeo horses become injured, often fatally, this way.

Scroll down to see how this campaign began...

In the market for a new or used car? If you oppose animal cruelty, think twice about buying a Dodge, or doing any business with Gary Barbera Dodge.

Like many Dodge dealerships, Gary Barbera Dodge sponsors abusive rodeos. And not just any rodeo, but a rodeo supplied by the infamous “Three Hills Rodeo” stock company, whose president, David Morehead, pled guilty to 36 counts of horse cruelty right here in Pennsylvania (Read more about this here.) 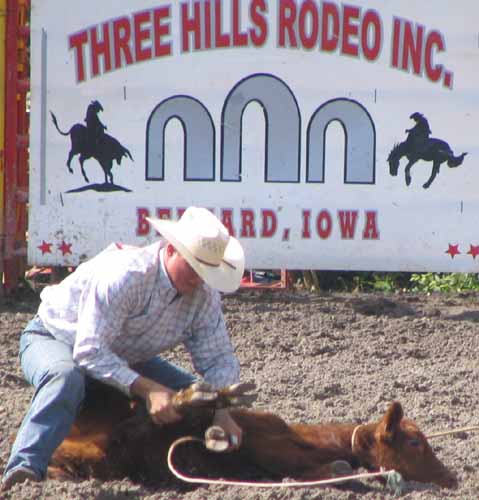 Mr. Morehead’s use of the hot-shot is not only a violation of state law, but also the rodeo’s so-called “humane rules.” Showing once again that Three Hills Rodeo is run by not only a cheater, but a criminal. And Gary Barbera Dodge is proud to sponsor THIS?

The Liberty Pro Rodeo, in coordination with Three Hills Rodeo, also features the stunning cruelty of “calf roping,” where men on horses chase down and clothesline a 3-4 month old calf, slam him into the ground, and drag him by the neck through the dirt. Calf roping has been banned in many cities and municipalities across the United States. See more photos and videos exposing the animal injuries, deaths, and cruelty inherent in rodeo, at RodeoCruelty.com

Any rodeo featuring animals is a spectacle of cruelty. All rodeos depend on implements of torture including buckstraps, electric prods and spurs to inflict pain and torment on the animals in order to get them to "perform". For example, in the photo at right the bull is not rearing naturally, but in reaction to a rope tied around his sensitive abdomen area and likely other abuses in the chute such as shocking, spiking, tail-twisting or raking.

Without financial backing from sponsors like Gary Barbera Dodge, rodeos would not survive.

Below is a letter sent to Gary Barbera Dodge from the Rodeo Education Campaign (REC) in effort to spark a dialogue on the issue. Additionally, REC sent a DVD of rodeo abuse to Mr. Barbera--which he has reportedly viewed. Unbelievably, Mr. Barbera has still refused to withdraw support to this cruel industry--apparently believing that ethical business policies and compassionate choices are of no interest to the car-buying public. Show Gary Barbera Dodge just how wrong this assumption is!

December 14, 2006
Gary Barbera
Gary Barbera's Dodgeland
6719 Ridge Avenue
Philadelphia PA 19128
Dear Mr. Barbera,
I have tried to contact you several times regarding the Liberty Pro Rodeo sponsored by Gary Barbera's Dodgeland and the LuLu Shriners. I wanted to give you some of the information our group, the "Rodeo Education Campaign," will be providing to the public during our upcoming campaign in the greater Philadelphia area regarding facts about animals used in the rodeo. In our campaign, among other things we will show and distribute a DVD (copy enclosed) containing video footage of Liberty Pro Rodeo president David Morehead using a 5,000 volt hot-shot electric prod on horses and bulls. Mr. Morehead's use of the hot-shot is a violation of not only state law, but also the rodeo's own "humane rules." Mr. Morehead is no stranger to animal abuse – he pled guilty to 36 counts of horse cruelty in January 2006.
It is our understanding that Gary Barbera's Dodgeland is a sponsor of the Liberty Pro Rodeo. However, we believe that once you become aware of the facts, you and Gary Barbera's Dodgeland, famous for the "Barbera Cares" program, will no longer want to be associated with the rodeo's institutionalized animal cruelty.
Rodeos already have been banned in many cities and municipalities, including Fort Wayne, Indiana, San Francisco, California, and St. Petersburg, Florida. We plan to begin our rodeo education campaign in early 2007, and in the future we will promulgate legislation outlawing rodeos in this area. The specific legislation will be determined at a future date, but we expect it will be similar to the Pittsburgh ordinance prohibiting bucking straps, electric prods, and sharpened or fixed spurs – which are all devices used by rodeos, including Liberty Pro Rodeo.
I will be contacting you in the next few weeks to follow up on the information in this letter. In the meantime, if you have any questions, please call me at (number withheld to public).
Sincerely,
Rodeo Education Campaign

Learn more about calf roping, steer busting, "bucking" horses, and the atrocities inflicted on animals in rodeo at RodeoCruelty.com. Then go to CorporateThugs.com to find out what you can do as a consumer to get corporations out of the business of subsidizing abuse.

To get involved and learn more about the Barbera Brutality campaign, contact the Rodeo Education Campaign:
Email: This email address is being protected from spambots. You need JavaScript enabled to view it.
Phone: 610-733-1248