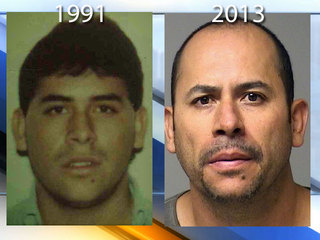 DENVER - A Texas murder suspect on the run for 21 years is now in custody in Denver.

U.S. Marshals arrested Jose Luis Aguilar on Thursday. He's been wanted since 1992 for allegedly shooting and killing a man during an argument at a rodeo in Plainview, Texas.

The Marshals Service says they learned on Wednesday that Aguilar was in the Denver area under an assumed name. They set up surveillance on a hope in the East 16000 Block of Green Valley Ranch Boulevard Thursday.

The Marshals brought with them computer generated photograph approximating at what Aguilar might look like now based on a photograph from 1991.

They watched Aguilar leave the home around 8:15 a.m. and later arrested him at the intersection of 46th Avenue and Chambers Road.

They confirmed his true identity with a fingerprint match.

Aguilar is being held in the Douglas County jail south of Denver as he awaits extradition back to Texas. It wasn't clear if he has a lawyer.