Enjoy a Corona with that Bloody Gore

My colleague Alex Halperin, a reporter for BusinessWeek.com, recently took in a bullfight while on vacation in Mexico. He ended up seeing a couple of unsavory brand placements along with it. Domino's Pizza and Corona each had uniformed vendors working the crowd at Plaza Mexico, the stadium in Mexico City.

While SHARK isn't PETA, (we keep our clothes on while we work) we certainly are actively working on this "stuff".

SHARK agrees with you 100% that brands should draw the line somewhere. Care to lend a hand in that effort or is it just all talk? Email us at This email address is being protected from spambots. You need JavaScript enabled to view it.. We would love to talk.

In the meantime checkout our page detailing Coca-Cola's long and sordid history in promoting animal cruelty that continues to this very day: www.CokeCruelty.com 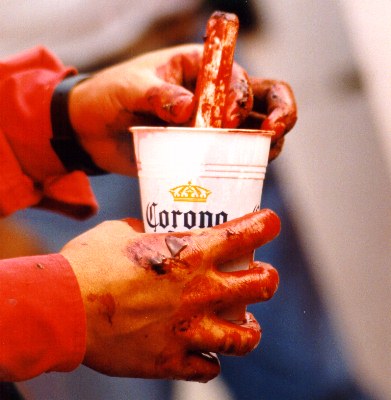 Halperin wrote me: "After one bullfight the crowd called "oreja" - meaning that the teenage matador should be awarded the bull's sawed off ear as a trophy. He got it. It's not a nice mental image to go along with chomping on a slice of Domino's pepperoni." Halperin also pointed out that it's ironic that Anheuser-Busch, which owns half of Corona parent Grupo Modelo, trumpets its contributions to animal welfare through Busch Gardens and SeaWorld.

I'm surprised these companies haven't yet drawn the ire of PETA, frankly. But I imagine that Domino's and Corona figure that if you're at a bullfight, you're ok with the violence (and, subsequently, that all that bull-goring is working up your appetite for a slice and a brew). And after all, bullfighting is legal in Mexico.

But shouldn't brands draw a line somewhere? Cockfighting is legal in Mexico too. What American marketer or ad agency would go near cockfighting? Oh right, Coca-Cola did. Forgot about that one. Hey PETA, where are you on this stuff?