While we're banning dog fighting, we should ban rodeo, too

"The life of a rodeo animal consists of long periods of discomfort and boredom, interspersed with bursts of pain and terror."

by Dale Keys
March 8, 2006
Originally published in The Idaho Statesman

I stopped going to rodeos a few years ago. The episode that finally changed my mind about the sport was an event called the wild-horse race.

A wild horse was released into the arena, where a team of cowboys roped its neck and legs. After choking the horse to its knees, they saddled it, hoisted one cowboy onto its back, then let it up for the eight-second ride. 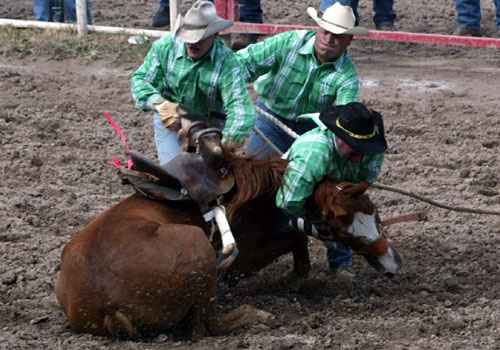 It was sickening. I think about rodeos now every time I read about animal cruelty issues, such as the proposal in the Idaho Legislature to make organized animal fighting a felony.

That's a good thing. But in the time it takes you to read this sentence, a rooster will kill another rooster. In a chicken yard, on a farm, with nobody watching or betting on a winner. Males of many different species will instinctively fight to the death all by themselves. Rodeo animals, on the other hand, are repeatedly forced to fight or run for their lives their entire short existence.

For anyone wanting to debate rodeo cruelty with me, I only ask that before we talk, tie one end of a 50-foot rope around your neck and the other end to a tree, and take off running as fast as you can. When you get to the end of the rope, I'll let you begin the discussion.

The life of a rodeo animal consists of long periods of discomfort and boredom, interspersed with bursts of pain and terror. All rodeo livestock ends up at the slaughterhouse, including the horses ("meat by-products"). Saddle-bronc riding didn't seem cruel to me for a long time, since the cowboy always ends up in the dirt. But in retrospect I think the horses might have it the worst. Saddle broncs buck because they're flank-strapped, shocked with cattle prods, and jabbed with spurs. The harder they buck, the longer they get to live — and the more they get used.

I should mention that watching a world-famous handler like John Lyons humanely teach a horse not to buck is 10 times more exciting than any rodeo I've ever been to.

Last August at the Omak rodeo in Washington, a horse broke its neck and died in front of the crowd during the wild-horse race. With rodeo being promoted as a family event, I wonder how parents explain this to their kids.

I'm not a vegetarian, and I don't belong to PETA. I grew up hunting and fishing and still do. I probably wouldn't be alive today if not for medical testing on animals, and you probably wouldn't be either. But not even a lab rat deserves to be tortured in front of a cheering crowd.

Take cruelty out of rodeo, and you're pretty much left with the parade, the rodeo queen and barrel racing.

What if the Legislature actually legalized dog fighting and cockfighting? Would the Statesman send a sports writer to cover those events? And if that sports writer refused to attend the event for ethical reasons, how would he explain the difference between a dog fight and the Snake River Stampede?

Let's discuss it. But first, let me go get that 50-foot rope.