Corruption, Cruelty and an Independent Eyewitness at the Big Loop Rodeo

A Plea For Your Support

The media coverage over the outrageous arrest of a SHARK investigator this past weekend at the Big Loop Rodeo in Jordan Valley, Oregon, continues.

We are presenting to you a new article from EugeneWeekly.com that blows the entire issue apart, but before we get to that we want to ask for your help.

We have often dealt with corrupt law enforcement who act more like they work for those who commit animal cruelty than for the public at large. This is what has happened in Oregon.

As soon as we got word that our investigator had been violently arrested, I got on the next available flight and traveled throughout the night to get to the rodeo the next day. As you can imagine, that was expensive, but SHARK doesn't leave our people behind or in danger's way. We will now also need to deal with our investigator's fraudulent arrest, which will cost a great deal of money as well.

We hope that you will consider making a generous donation to SHARK to help defray the costs associated with these clear violations of our rights as we fight for animals.

If you are as outraged as we are that local deputies, who, as you will read, have financial ties to the rodeo, abused their power by arresting an innocent man who was only there to document horses, steers and calves being brutalized, then register your support by either sending a check to SHARK at the following address, or donate online at our PayPal account. 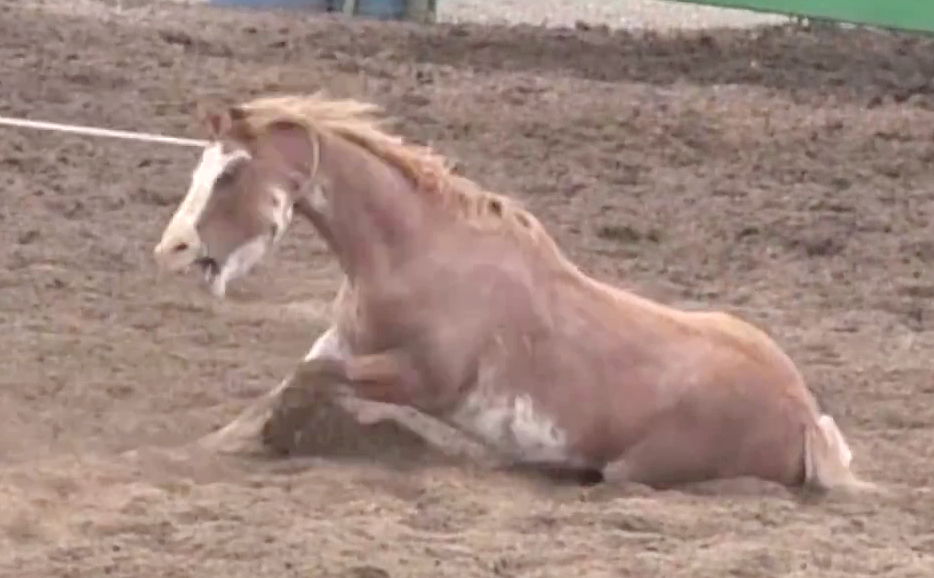 A horse that was slammed to the ground on the first day of the Big Loop Rodeo. After realizing SHARK was capturing abuse on video, the local Sheriff's rushed in on the second day, arrested one of our investigators, and forced the other one to leave the arena. This is what we are fighting against.

Corruption, Cruelty and an Independent Eyewitness at the Big Loop Rodeo

As you will read in the following article, an eyewitness has come forward who not only saw our Investigator be violently arrested, but saw how violent the rodeo was to the animals forced to perform in it. The article also contains part of our research into ties between the Malheur County Sheriff's Department and the Big Loop Rodeo.

Please read the article, and then take action by contacting the Oregon State Attorney General and ask for a full investigation of the Malheur County Sheriff's department for their abusive actions. Please forward the article to the Attorney General so she will see the evidence that is at hand.

In French, Malheur translates to "woe."  This is appropriate, for the Malheur Sheriff's department is woefully bad, woefully immoral and woefully corrupt. Whoever it was that named that county was extremely prescient about the future of law enforcement in that area.

You can view and comment on the full article HERE.

Email:  This email address is being protected from spambots. You need JavaScript enabled to view it.

(Please ask that they forward your email to the Attorney General)

Over the weekend the group SHARK (SHowing Animals Respect and Kindness) reported a volunteer, Adam Fahnestock was arrested for videoing at the event. Steve Hindi of SHARK also tangled with the law over videoing the controversial horse tripping event (see the video at bottom).

This is the footage filmed by Fahnestock at the 2013 rodeo, before he was arrested.

And this letter by a woman who attended the rodeo was sent to several legislators:

Hello, I wanted to let you know that I went to the Jordan Valley Big Loop Rodeo this last weekend, and I would like to tell you what I saw there. As I testified previously I grew up in Eastern Oregon and have gone to rodeos since I was a small child. I am embarrassed to admit I'm from Eastern Oregon after going to Jordan Valley.

1. There were signs prohibiting taking videos, however the announcer said that just applied to "people from Western Oregon, animal rights activists, and the media." The announcer stated that didn't apply to the "good folks who want to film their relatives or friends." There were lots of cameras visible. He also stated that if the people from Western Oregon, animal rights activists, or the media were observed taking video they would be arrested and escorted off the property. They violently arrested a man about 10' from where I was sitting, took him down in the seats, and took him to the Malheur County Jail where he was booked for Disorderly Conduct and Resisting Arrest. They ejected three other people that I saw, one man who stated he was just taking pictures, not video. I understand that it is private property, and that they have the right to make the rules, but I feel the rules should apply to everyone.

2. They mentioned the bill and that they had made trips to testify. The announcer stated that the bill "looks like it's going to pass, but that it would not affect their rodeo" at all.

3. The announcer stated that people from Western Oregon should just stay in their cities and leave them alone.

4. The horses used in the" Big Loop" event are thin enough that you can count their ribs, and seem young.

5. Because I was so uncomfortable being there, I did not stay for the entire rodeo. During the first round of the "Big Loop" event, they managed to rope two horses by the neck, one fairly close to the throatlatch, did not rope any horses by the feet, so in the first section all the competitors got "no time". However, one horse crashed violently into the wall, and they continued trying to rope it after it got up. I did not see them check the horse out by a veterinarian.

6. The horses that were in the "Big Loop" event were completely terrified.

I wanted to share my experience with you. I have never left a rodeo before it was over before. I was uncomfortable there and felt threatened by their general attitude. The crowd cheered when people were arrested and ejected.

Thank you for considering this statement. I urge you to pass this bill and protect those that have no voice in this event, the horses.

And the article continues:

Steve Hindi of SHARK, which videoed the events last year, leading to the current legislative actions says of the video below that it was "a bogus police stop on Sunday, the last day of the rodeo, after I was ejected for having a camera at the rodeo." He adds, "Of course, lots of people had cameras, and virtually everyone had phones capable of video. The traffics stop appears to be illegitimate, as we can find no law allowing a traffic stop for not providing ID on private property  - the stated reason for the stop."

SHARK alleges in a press release that the Malheur County Sheriff has "deep ties" to the Big Loop Rodeo:

SHARK has initiated an investigation into the existing connections between the rodeo and the Malheur County Sheriff's Department who the group accuses of violations of free speech, and using intimidation tactics. The following is part of the report. The full report is available upon request.

* The Malheur County Sheriff's Department also has direct ties to the Big Loop Rodeo through their deputies. In his testimony before the above-mentioned Senate committee, Jordan Valley Mayor Jake Roe stated, "The Sheriff's posse sells food at the park to raise money..." Jerry Raburn, an official with the Jordan Valley Rodeo Association, told the Senate Committee that "Not only is the rodeo a boost for the businesses here, but also for volunteer groups, service organizations, schools and churches," including the "Malheur County Sheriff's Deputies."

* According to Malheur County Sheriff Sergeant Richard Harriman, who, along with Bob Wroten forced one of SHARK's activists to leave the rodeo, that Wroten himself was not only a Malheur County Deputy, but also held a dual position on the "rodeo board."

* Malheur County Sheriff Brian E. Wolfe defended the Jordan Valley Big Loop Rodeo and horse tripping in a letter sent to the Oregon State Senate Committee on Environment and Natural Resources, which recently held a hearing on a bill to ban "horse tripping." Wolfe misused his official county stationary and position as Sheriff to made a political statement when he said "I personally oppose any and all legislation, laws, or rules prohibiting Rodeo events including Horse Roping." You can read his full letter here.

"We now know that the Malheur County Sheriff Officers, the same men who violated the rights of our activists, have deep ties to the rodeo," states SHARK President Steve Hindi. "When they saw the cruelty that was documented on the first day, they abused their power on the second and third day to make sure that no more video would make it to public view. That's outrageous, and the Sheriff's office needs to be held accountable for acting like thugs protecting a good old boys network of animal abuse and cruelty."