On August 13, 2018, SHARK released a video exposing the ties betweenThe Denver Post and the Cheyenne Frontier Days Rodeo, or CFD. We’ve just released a new video updating the public to this campaign. Please watch it HERE.
Sign the petition
"Tell The Denver Post Newspaper to Stop Sponsoring Animal Cruelty"
To summarize our videos and this campaign:

• Based on more than a decade of video documentation at the Cheyenne Frontier Days Rodeo, SHARK has concluded that it is the most cruel and deadly rodeo in the world.

• The Denver Post, through its foundation, sponsors The Denver Post Cheyenne Frontier Days Train, which both promotes, and takes passengers to the rodeo. Denver Post chairman W. Dean Singleton was quoted that he told the rodeo, “You give me a rodeo, I’ll give you a train.”

• Instead of reporting on the many injuries and deaths at CFD, The Denver Post instead chose to publish a series of promotional pictures. 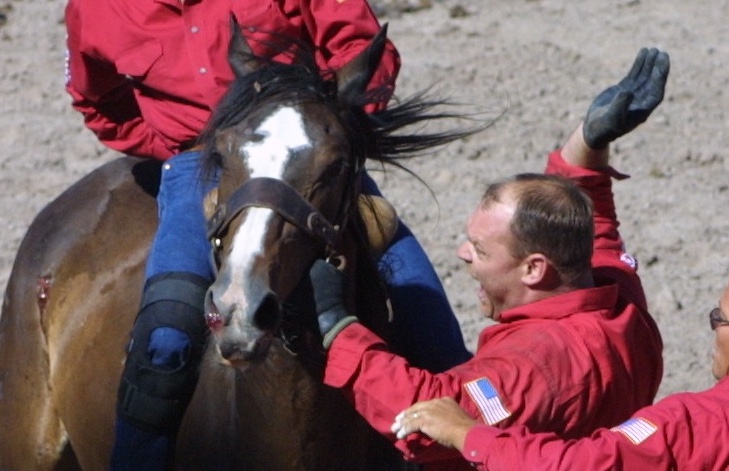 Just one of many examples of a horse brutalized at the CFD rodeo
Following the release of our first video, SHARK, and many of you reached out to management at The Denver Post to see if they would respond, and we thank you for taking action. However, no one from The Post responded to us regarding this important issue.

The Cheyenne Frontier Days Rodeo is not some benign event like a local bake sale that a newspaper can safely endorse without violating it’s ethical principles. This rodeo, where a number of horses have been brutalized and even killed, is in fact a highly controversial event that is very much a subject of news reporting, and therefore should not be tied directly to or receive special treatment from any media outlet. 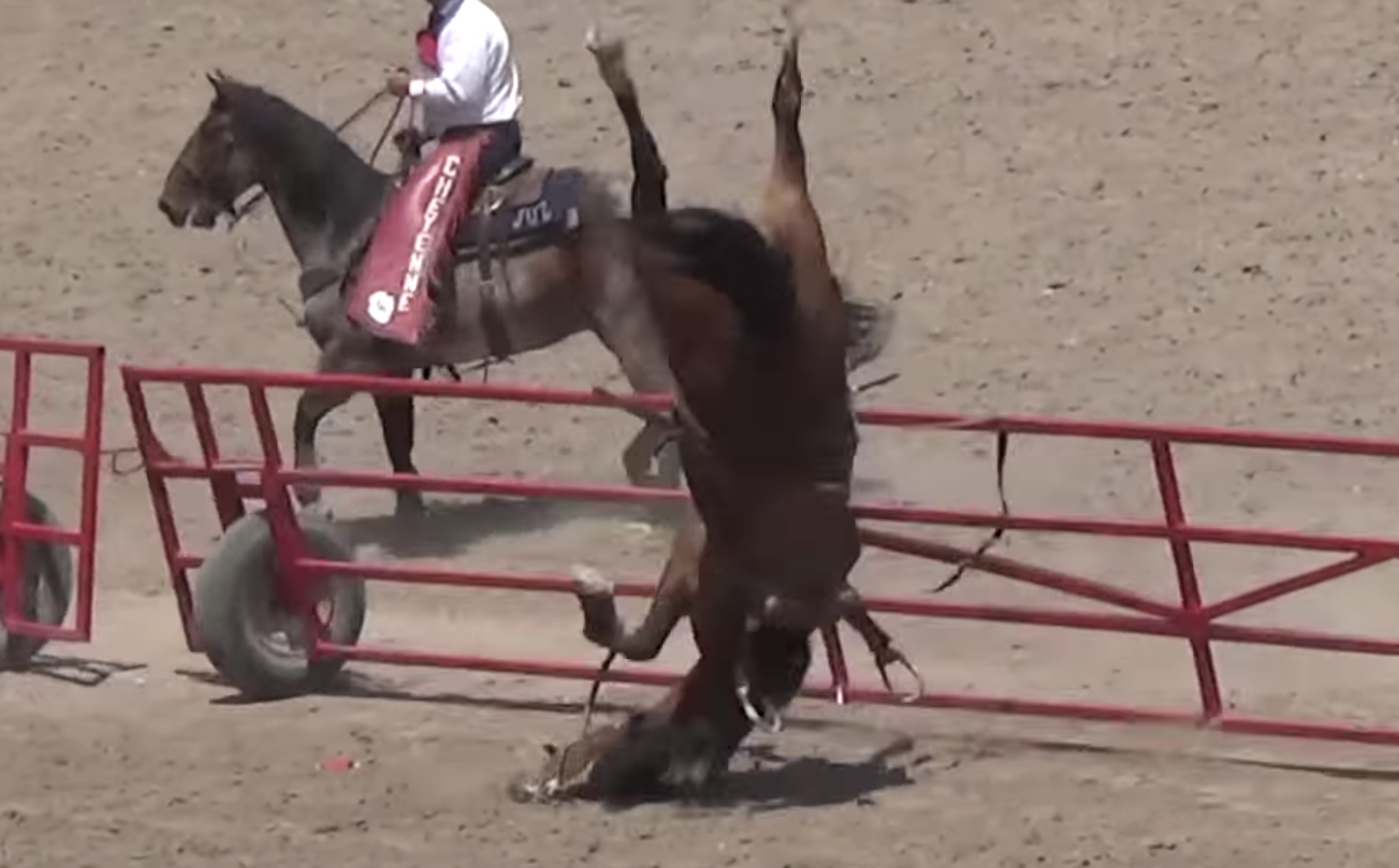 A horse slammed into a metal fence and went over it at the CFD rodeo
The DENVER POST ETHICS POLICY states: "Our job is to intensely scrutinize the activities of others as watchdogs that challenge authority and give voice to the voiceless. Our own actions should withstand equally intense scrutiny. We should be transparent.'

We approached the editorial staff of The Denver Post with this evidence and asked them to disassociate the paper from the rodeo due to the inherent conflicts that exist, yet they refuse to even discuss this issue with us. You cannot claim to be a watchdog whose “...own actions should withstand equally intense scrutiny,” and then deliberately ignore when someone does just that.”

Our campaign raises very legitimate issues. Years of solid video documentation deserves a response from a publication of the caliber of the Denver Post. One would think that the Post would be motivated to defend its actions. But instead of standing as a pillar of journalistic integrity, The Post is instead sponsoring and promoting organized animal abuse, injuries and death.

SHARK again calls on the staff of The Denver Post to respond to our well-founded claims that The Post sponsors cruelty, and fails to report the facts. Please politely contact the following and ask that they respond to this issue.
Lee Ann Colacioppo
This email address is being protected from spambots. You need JavaScript enabled to view it.
Editor of The Denver Post

Tracy Ulmer
President of The Denver Post Community Foundation
This email address is being protected from spambots. You need JavaScript enabled to view it.
You can also call The Denver Post at 303-832-3232, send a letter to the editor using this link, and leave a comment on the Post's Facebook account.

On July 21, 2018,  SHARK documented a cruel pig wrestling event which was held at the Cauldron Falls Bar and Grill, located in Marinette County, WI.  A number of young children were present at the event where pigs were brutalized and female contestants encouraged to expose their breasts. 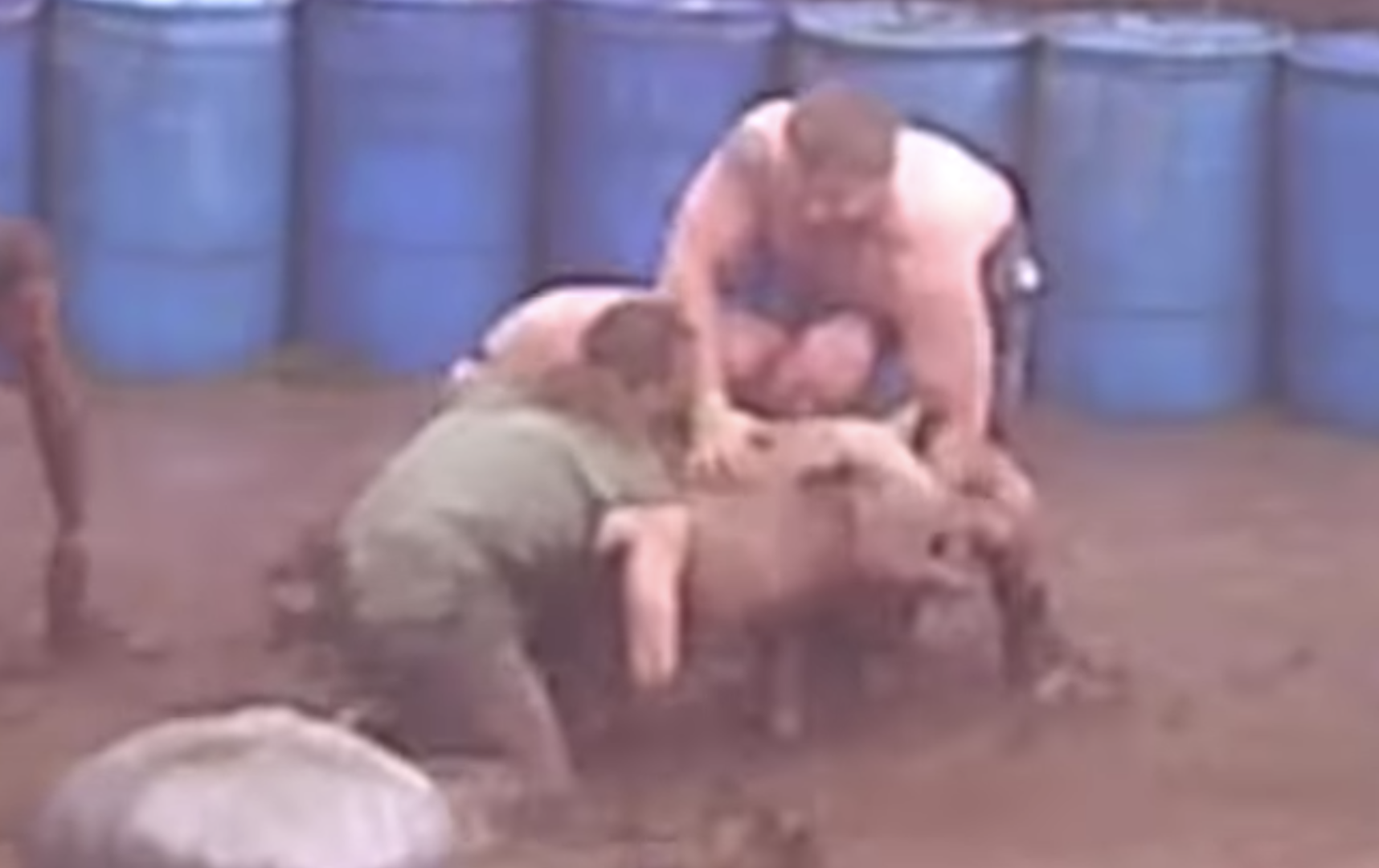 A pig being brutalized at the event
Our undercover videographer captured footage of a male working the event who exposed his genitals just a few feet away from a very young girl. We reported this to the Marinette County Sheriff's Department who, only after our continued pressure, finally took action. Their response, however, was pathetic, as he was only charged with disorderly conduct. It is also important to note that human/animal fighting is illegal in Wisconsin. 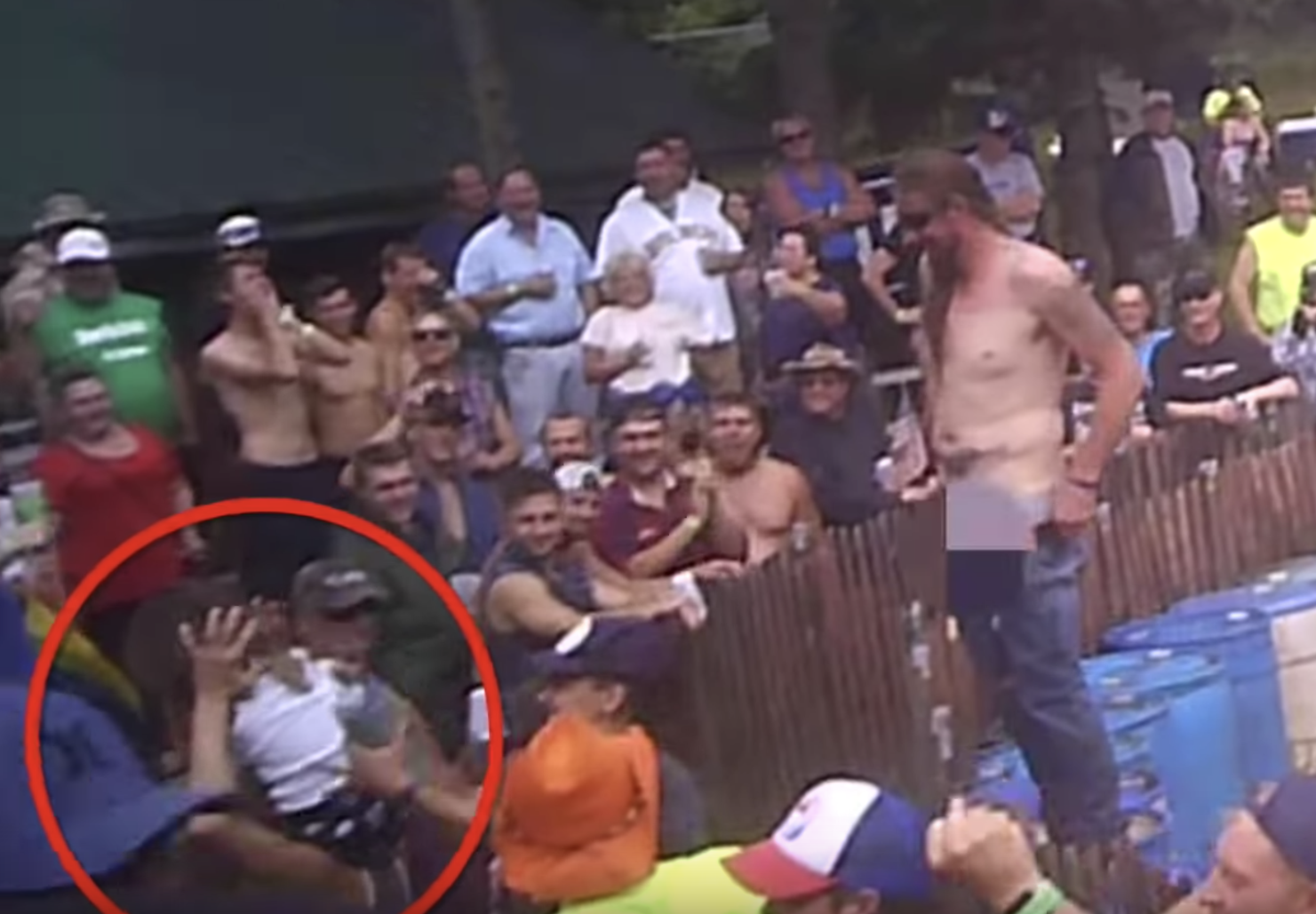 The worker who exposed himself with the young girl (white shirt, on the left)
Not only did a grown man expose himself near a young girl, but the fight itself was clearly illegal. We therefore call for the worker and the bar to be held fully accountable for these violations and this event banned from happening again.

Please contact the Marinette County District Attorney and ask that he take stronger action against the worker and to make sure  Cauldron Falls Bar and Grill is prosecuted for violating Wisconsin’s anti-animal fighting law.
EMAIL: DeShea D. Morrow, District Attorney

Les Moonves, CEO of CBS, has been forced out due to allegations of sexual assault and harassment. If you’re wondering why this matters to SHARK, you need to remember that SHARK has waged a campaign to get CBS to stop airing the cruel National Finals Rodeo. We reached out to Moonves many times, but he refused to respond. It’s not a big surprise that someone who would protect animal cruelty would be cruel to women.

We will reach out to his replacement and try to convince them to stop airing this disgraceful rodeo. We will have more information in the near future.