The Facts about HSUS and the Vermont Pro-Puppy Mill Bill

It was just over one week ago that SHARK received a call from Dr. Peggy Larson, a renowned veterinarian, former USDA inspector and member of the Vermont Veterinarian Association, asking us to help with an emergency situation in Vermont.  When someone who has such a long and distinguished career helping animals as Dr. Larson has asks for help, you drop the project you are working on and you get to work. That is exactly what we did.

Legislation that would reduce VT’s current cage sizes for dogs down to what is already prescribed under the federal Animal Welfare Act (AWA) had passed the VT Senate and House and was on it’s way to the Governor’s desk. If signed into law, this would have an overwhelmingly negative effect on small and medium size dogs who would see the minimum size of their cages reduced. Puppy mill operators would benefit from this as they would be able to have more dogs in smaller cages.

Dr. Larson put us in touch with Sue Skaskiw, Executive Director, VT Volunteer Services for Animals Humane Society (VVSA). Ms. Skaskiw is VT’s senior humane law enforcement officer who worked more than a decade ago with the Vermont legislature to increase the cage size for dogs and cats, as the federal minimum sized cages were too small and cruel. She told us that the legislation, H.218, would undo that positive work and condemn animals used in breeding facilities to even more suffering. 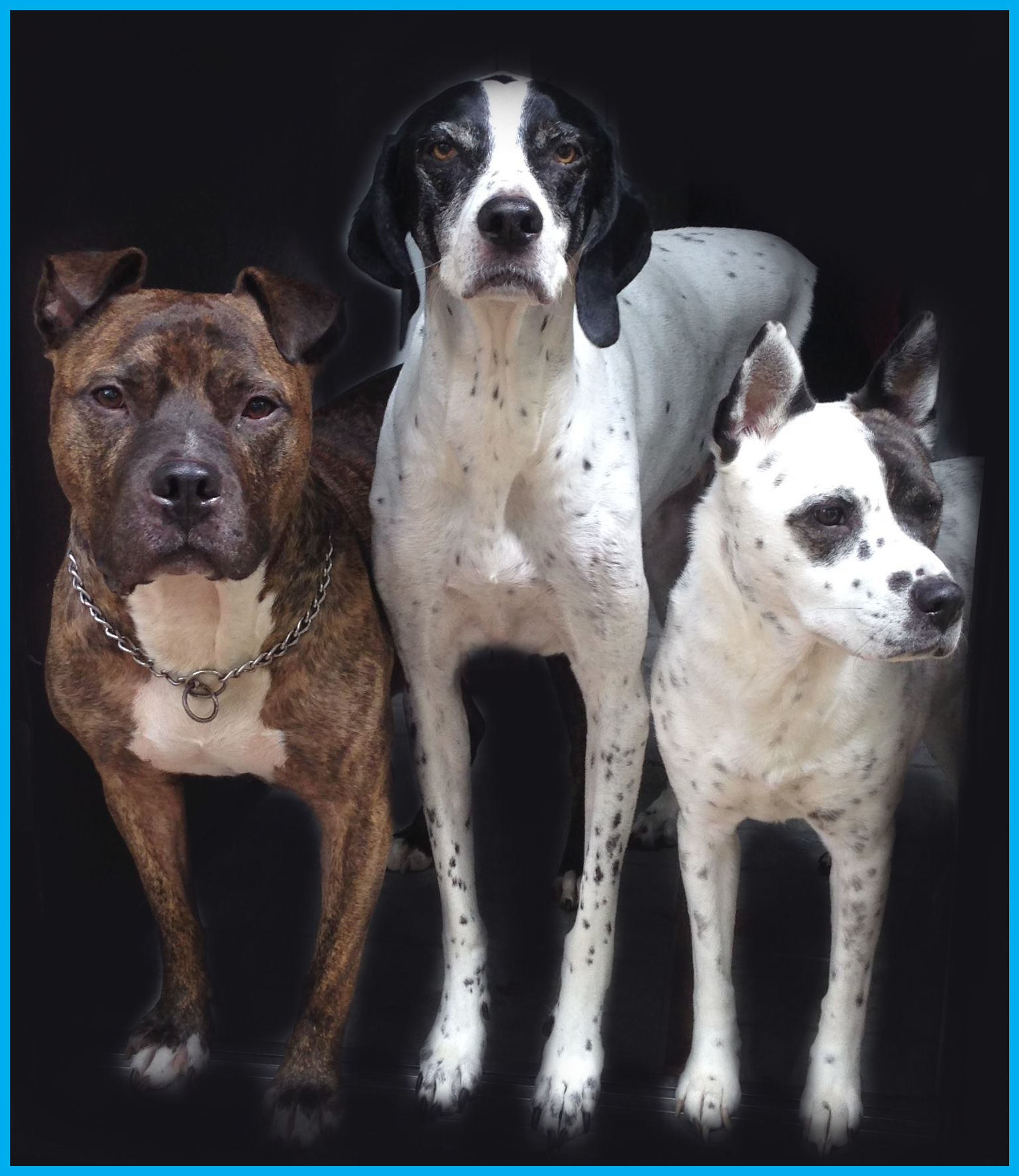 Dogs of all shapes and sizes will suffer in smaller cages if H.218 becomes law. HSUS turned their back on VT's dogs. SHARK did not
With these two preeminent women fighting a last ditch attempt to spare VT’s dogs from having their minimum cage sizes reduced, we privately reached out to Wayne Pacelle, President of the Humane Society of the United States (HSUS). Why did we do this? Because HSUS had endorsed the legislation and legislators supported the bill because of that. Here’s proof:

"I have inquired with a House Agriculture member concerning this bill. He assures me The Humane Society of the U.S. approves of this legislation,” VT Representative Dave Potter.

Pacelle had Barry Londeree, VT State Director for HSUS, write a response that was meaningless, for it ignored the fact that basic fact that cage sizes would be reduced.  We sent the following to Londeree.

This is in regards to H.218, the legislation that would reduce Vermont’s cage standards for dogs and cats to match federal minimum requirements.

• Do you deny that this legislation, if signed into law, would reduce cage sizes for dogs and cats?

Also, are you aware that the sponsor of the legislation, John Bartholomew, a former vivisector who, “...spent his professional career in biomedical research as a laboratory animal veterinarian,” has stated that HSUS has endorsed his legislation?

As you know, the bill is being sent to the Governor’s desk, so there is very little time to act. Therefore, please respond ASAP.

Londeree didn’t respond. Neither did Pacelle.  It wasn’t until SHARK went public with this important issue that Pacelle was forced to respond to HSUS donors who were rightfully upset that HSUS was supporting legislation that would benefit puppy mills.

On May 12th Pacelle released a long email to donors attempting to stop the bleeding caused by their support of pro-puppy mill legislation. Pacelle wrote, "Regarding the Vermont legislation – which is one of hundreds and hundreds of animal welfare bills that HSUS weighs in on in state legislatures around the nation…”  which was meant to imply that HSUS was a bystander just supporting some local legation. This notion is false.
The VT legislature created the "VT Animal Shelter Working Group" to work on the legislation back in 2015. Barry Londeree participated in two of the four meetings held by the group, meaning he had a duty and responsibility to understand the ramifications of the bill, including the reduction in cage sizes and positive impact this would have for breeders and puppy mills. Londeree failed and now animals will suffer for it.

From the report of the VT Animal Shelter Working Group. This is proof that HSUS's VT State Director participated in the drafting of the legislation.
Sadly, Wayne Pacelle too has failed the animals. He could have listened to Dr. Larson and Ms. Skaskiw and understood that HSUS was on the wrong side of this issue, but he did not. Instead of asking the Governor to veto the legislation until the offending language could be removed, Pacelle chose to sacrifice the welfare of  VT’s dogs in order to not admit HSUS had made a mistake.  Perhaps that was the best financial move to make - to keep money pouring into HSUS’s already overflowing coffers - but it was neither honorable nor the right thing to do.

We are not the only ones stating that cage sizes will be reduced. The Vermont Valley News published the following on May 13, 2017:

Calculations by the Valley News indicate that the new standards could scale back on cage size for several typical dog sizes.

The more people learn about H.218, the more they realize it will help those who treat animals as mere unfeeling commodities that can be shoved into small cages and treated with cruelty. Apologists for this bad legislation, like Wayne Pacelle, now have nowhere to hide.
According to their 2015 IRS tax form, HSUS raked in more than $133,000,000 with total assets of just under a quarter-of-a-billion dollars. Wayne Pacelle himself bagged nearly $450,000 in salary and other compensation, with a score of other executives making obscene amounts of money from an organization that is supposed to be a charity that benefits animals. I’d jokingly say HSUS probably spends more on lunches that SHARK does paying our entire team of investigators, but they probably do - while accomplishing a lot less than we do. We didn't ask for this fight with HSUS, but when faced with that or allow a great wrong to be committed, we didn’t back down either.  I’m truly sorry to say that saving face and reaping donations appears to be more important to HSUS than the suffering of dogs who will have less space to live their already miserable lives in.

From HSUS' 2015 IRS 990.  So much money, yet no courage to admit they were wrong and do the right thing to help animals
At the start of this letter I stated that when asked for help, we dropped what we were doing and got to work. I mean that literally. There are now only four investigators working for SHARK, including me. When the call came from Dr. Larson one of us had to set aside the work he was doing in order to focus on the impending disaster in VT.  Our investigator worked through that weekend and the days and nights that followed because at SHARK we don’t do 9-5, we work all hours to do what has to be done to help animals.

The suffering of VT’s dogs matters to us. If there was a chance we could make a difference, we had to act.
Not only has SHARK been in seven states fighting for animals since the start of the year, but at the same time we got the alert about the VT issue, the majority of the SHARK team were on Lake Erie, near the Canadian side, working with a Canadian animal protection group to document a horrific slaughter of cormorants by the Canadian Government. We even rescued one horribly maimed bird whose lower beak and tongue had been shot off and who had been left to die a slow, painful death. In order to save that innocent animal, SHARK Investigator Janet Enoch fell into the freezing water of Lake Erie - but she made sure the bird got safely into our boat before she did. I can’t think of any better way to define what SHARK is that that act of generosity and strength. 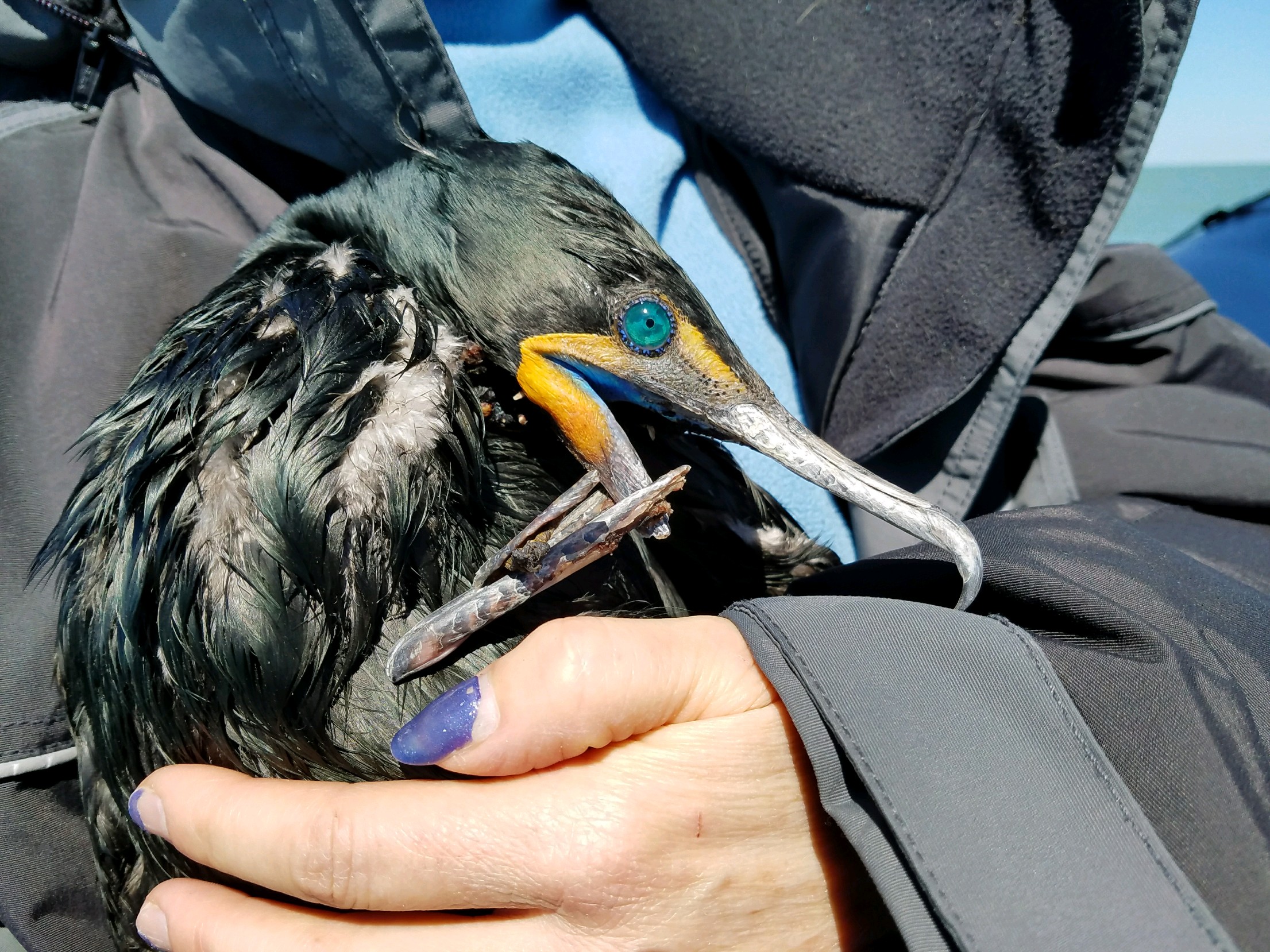 Janet Enoch holding the wounded cormorant she rescued after falling into Lake Erie
Please pass the following to everyone you know in Vermont.  Ask them to immediately contact VT Governor Phil Scott and ask him to veto H.218

Please also contact Wayne Pacelle and tell him if this bill passes, it will be because he didn’t have the courage to stand up and do what’s right:
This email address is being protected from spambots. You need JavaScript enabled to view it.