As we told you in our last update, SHARK accomplished so much in 2016 that it simply will not fit in one email. This then is Part II of our Year-in-Review.

Please click HERE to read the full mailer we've sent out, and HERE to watch our hard-hitting year-end video.

This past June, a county fair in Wisconsin was planning on having a horrendous pig wrestling contest. When we learned of it we took action, and are pleased to announce that it was cancelled!

SHARK has experience with these spectacles. In 2014 we sent a team of investigators to film a pig wrestling contest that was sponsored by the St. Patrick Parish in Stephensville, Wisconsin. The cruelty was abominable and our video went viral, being viewed more than 136,000 times. Working with our local partners, the Global Conservation Group, we fought hard to convince the church to not allow another pig wrestling event and we won that battle. 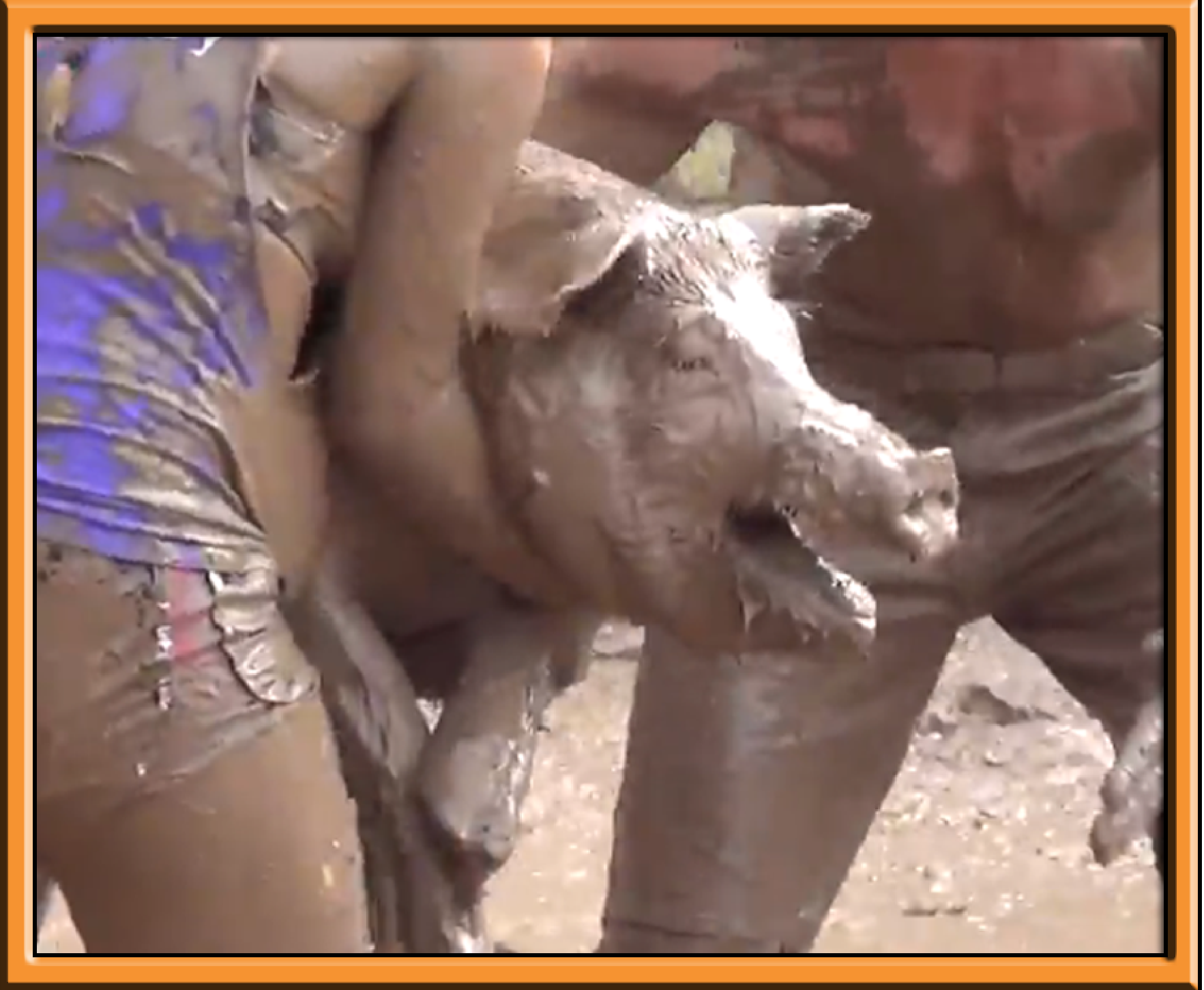 Bad Government at its Worst

In 2016, SHARK took on the government slaughter of cormorants on the Columbia River (bordering Oregon and Washington) and documented the needless killing of cormorants by hired thugs from US Department of Agriculture’s notorious Wildlife Services division. Cormorants are being blamed for eating salmon, while the true destroyer of millions of salmon ever year is the hydro-power system of dams run by the Army Corps of Engineers. That’s right; Army Corps is slaughtering thousands of innocent cormorants to cover up its own incompetence and mass-destruction of salmon.

SHARK fought for cormorants like no other group has. Our boat, the Bob & Nancy, was on the Columbia River for three weeks straight, and the video we recorded of the killing was unprecedented, for Wildlife Services, which slaughters millions of animals every year, is so secretive that rarely is their bloody work ever seen, much less captured on video. 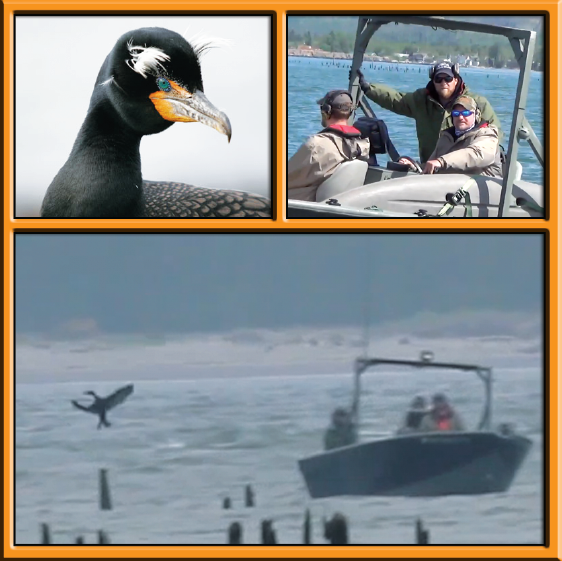 Above left: A beautiful cormorant, just like the thousands who were killed. Above right: The Wildlife Services killers. Never before had someone gotten this close to them. Bottom: Wildlife Services shoots a cormorant who falls into the river
In fact, Army Corps and Wildlife Services were so afraid of us that they coerced the Coast Guard into giving them an astounding 500 yard exclusionary zone, meaning we had to stay a quarter of a mile away from the killers’ boat. How did we deal with this? We brought in investigators with high-magnification lenses to film the killing from the shore of the river. Every move the bad guys made against us, we countered it to get the job done.

Tragically, the Wildlife Services killers restarted the cormorant slaughter in October, and while the SHARK team was willing to return to face the killers, we did not have the funds. No other group stepped forward to fill the void, and so the killers were allowed to slaughter unchallenged.

When our government acts in such a shameful way, it is important that it be exposed and fought against. That’s why this campaign was so important. No one else would spend so much time and effort to save these majestic birds and we know that because no one but SHARK did. 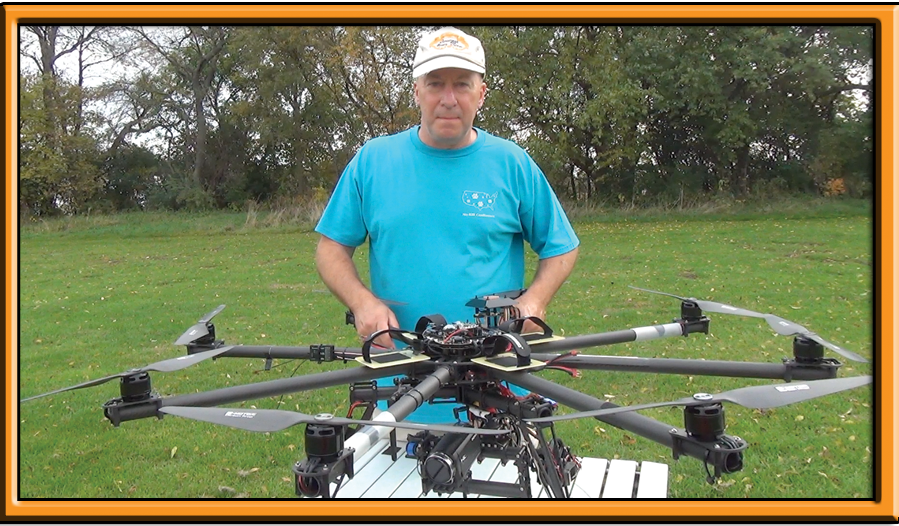 SHARK President Steve Hindi and the "Goliath" drone. SHARK uses technology to document and expose animal abuse, such as the cormorant slaughter
Cheyenne Frontier Rodeo Days Cruelty Exposed
The Cheyenne Frontier Days Rodeo (CFD) is the world’s most cruel and deadly rodeo, and SHARK was there again this year to document the suffering and deaths that happened for entertainment. When the Wyoming Tribune Eagle did a fluff piece on the CFD, we released a video unmasking their biased reporting. To my surprise, I received a call from the editor of that paper who did not defend what had happened but instead acknowledged that they had indeed made a mistake by publishing such a one-sided story. This was an important turn of events and proves how our work documenting animal cruelty can change minds. 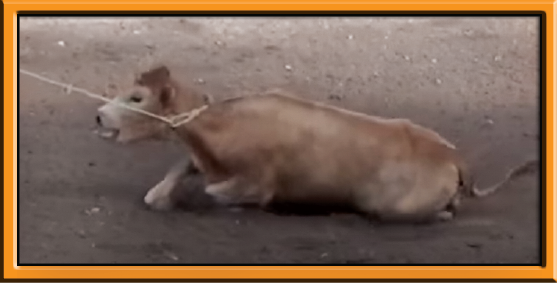 All the victories and ground-breaking campaigns we have shown you in this email, and that we will show you in forthcoming ones, would be impossible if not for your generous support. The truth is, we need that support right now. Our funds are almost gone. There is only enough money to pay for our investigators for a few months, then it’s over.

SHARK has only four full-time investigators who work day and night fighting for animals, and I mean that literally. You will find no more dedicated servants for the animals anywhere and the amount of work we do with so few people humbles me. I’m willing to bet that if you add all of their salaries (I am and have always been unpaid) it will come in under what one top executive of one of the big corporate animal groups rakes in every year. No where else will you find better value for your donation than with SHARK.

I believe in SHARK and our mission. That’s why I implore you to reach out to every one you know, show them what we do, and ask them to help us continue our vital work. I truly appreciate all that you have done for SHARK in the past, and I sincerely hope you will support us so that 2017 may bring even greater victories for the animals we all care about so much.

Steve Hindi
Founder and President
Please either mail a check to: SHARK at P.O. Box 28 Geneva, IL 60134 or click here to donate online

When we come across animals in need, we don't turn away - we take action. When we saw an injured goose in distress, we rescued her, and named her Cloe. When we saw a family of ducklings fall into a sewer, we worked until we rescued every single one of them and got them back to their mother. Now we need your help so we can continue to fight and save lives, just as we did these animals