This past weekend was an intense three days of protesting, documenting cruelty, and rescuing injured pigeons shot by Jim Inhofe, US Senator from Oklahoma, and his political donors.

A lot happened this past weekend, so we are going to break it down day-by-day.

Inhofe and his donors gathered at the Quartz Mountain Lodge in Lone Wolf, Oklahoma. From there they departed for the pigeon shoot and we followed them. They knew from the previous year we would do that, and this time they took extreme, dangerous measures to try to shake us. Cars at the back of their procession drove very slowly down the highway to block us, while the rest of the cars took off. While the killers were able to lose most of our cars, a car of activists from Arizona was able to follow them to the killing field where the shoot was to take place.

By the time those activists were able to bring the rest of the SHARK team to the pigeon shoot, approximately 45 minutes had passed. As soon as we arrived we got our drone into the air, and to our amazement, the shoot ended. The combined efforts of activists made this a much smaller shoot than previous years.

To prove this even further, let’s compare the shoots from 2014, 2015 and 2016. In 2014, SHARK investigator Stu Chaifetz attended Inhofe’s fundraiser undercover. He filmed the entire pigeon shoot, which lasted one hour and forty-five minutes. Even after the official shoot was over, people were still killing birds for another hour, so this was a very long day filled with killing. The following is a panoramic picture Stu took of the killing field. There were ten shooting stations on the field, and at each about 4-5 people stood shooting birds.

This is the field they used in 2015. In this picture taken by our Angel drone, you can see there were 8 stations. 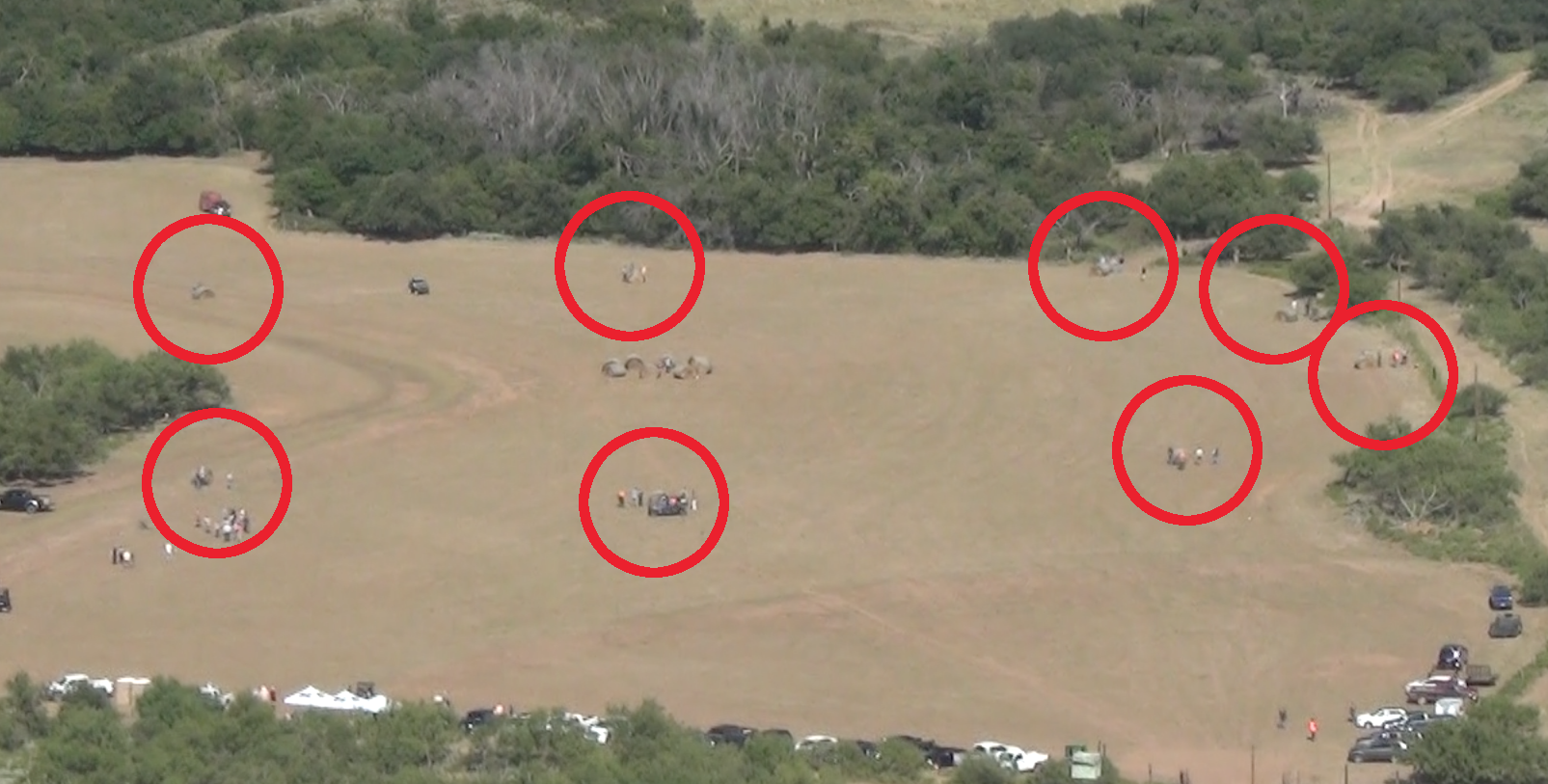 And this is 2016. In addition to the shoot time significantly dropping from 2 and 3/4 hours to just 45 minutes, there were only 6 shooting stations. This is a huge reduction! This is why we encouraged caring people to come to Oklahoma - because we have Jim Inhofe on the ropes, and we are determined to knock this slaughter out completely.

A dove slaughter was part of the fundraiser and it was scheduled for very early Saturday morning.  We were outside of Quartz Mountain, to once again follow them to the hunt, when we filmed this mass-violation of traffic safety law when Inhofe and his donors blew past this STOP sign. And why did they do it? Because they knew no police officer would ever ticket Senator Inhofe and the people who put lots of money in his campaign coffers. 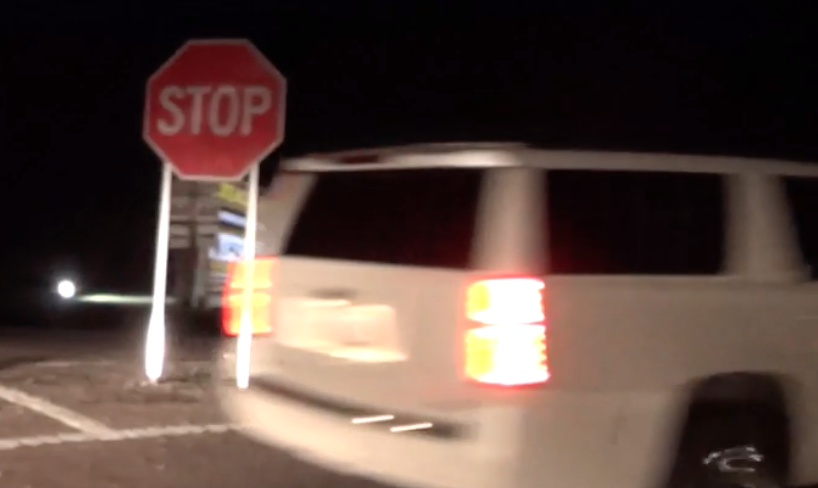 Inhofe and his donors violated traffic safety law by driving through this stop sign
At the hunt site, this participant lost it and assaulted SHARK President Steve Hindi. Predictably, the assailant was not arrested or even cited by the police. 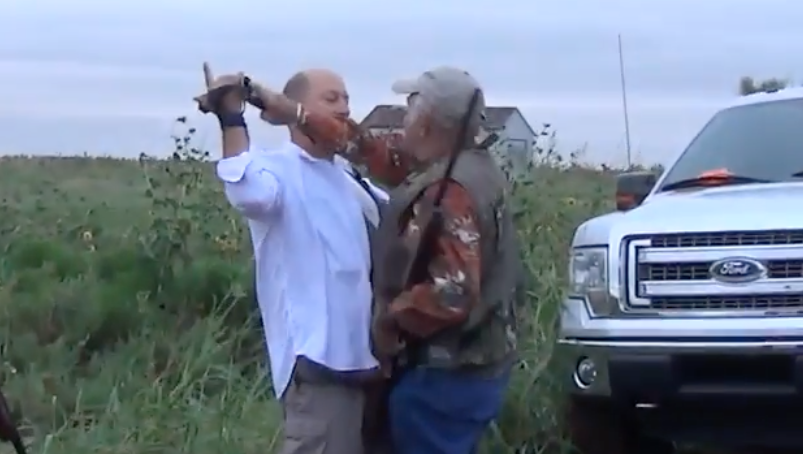 We filmed Inhofe himself on Saturday.  The exit to the property, where most of the cars left by, is where our cameraman was. Inhofe, however, scampered out the other way to avoid being filmed. Coward.

Inhofe at the dove hunt, and in the Oklahoma Farm Bureau truck which he used as a getaway vehicle

SHARK returned to the pigeon shoot location Sunday. We were horrified by the sight of the dead and dying pigeons left behind by Inhofe. 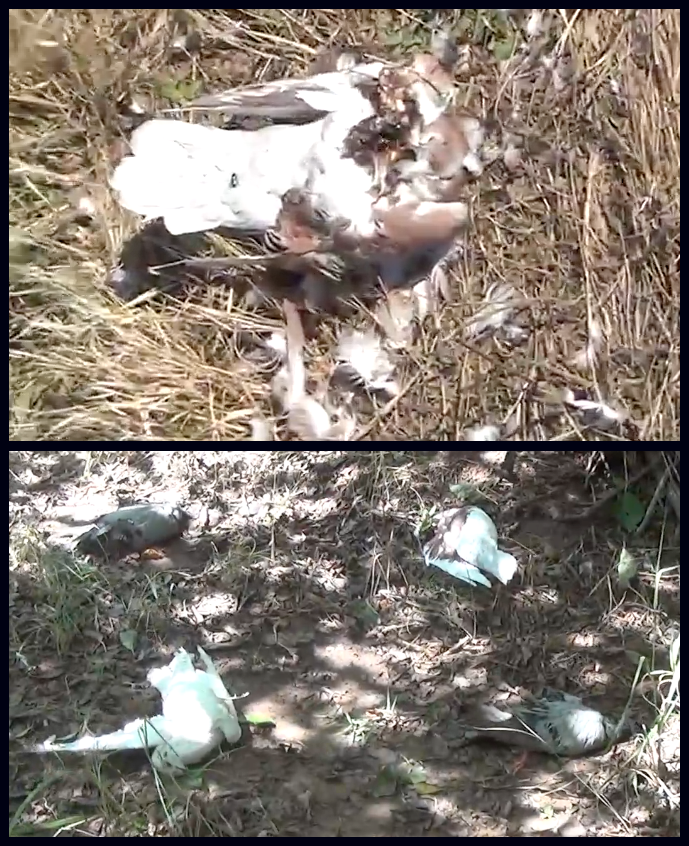 These are just some of the hundreds of victims of Inhofe's brutality
We rescued 29 injured pigeons who were then taken to the Oklahoma Wild Care rehabilitation facility. Sadly, due to their injuries, six birds passed away that night. 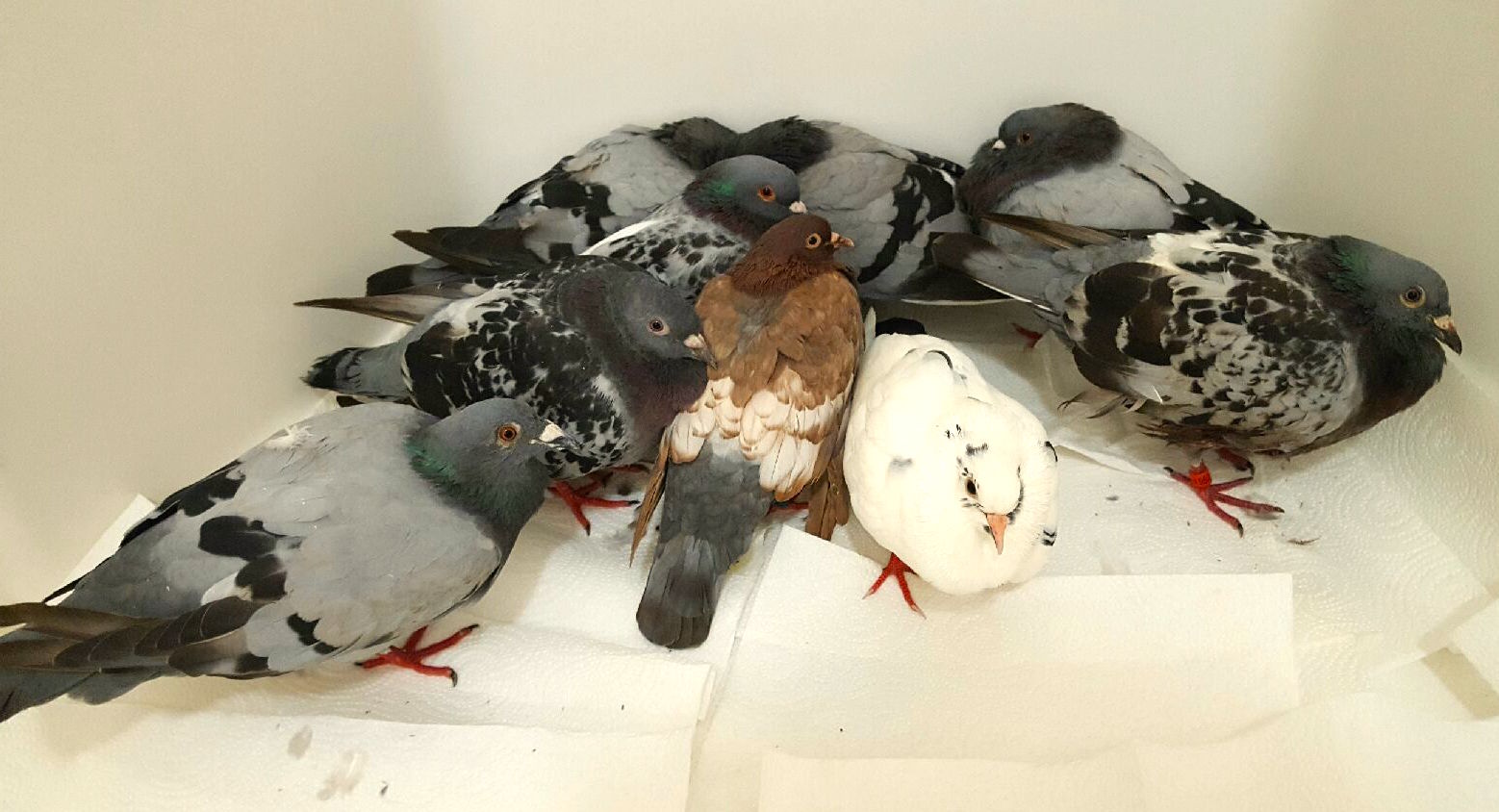 These are just some of the 29 injured pigeons we rescued. The pigeons were taken to WildCare Foundation in Noble, OK
The effect SHARK and our partners had on Inhofe’s cruel fundraiser cannot be understated. Not only has there been a dramatic reduction in the number of shooters, but this is the third location Inhofe has had to use in three years.

In 2014, we forced him off of the federal land he had illegally used for a political event. Last year he used a nearby farm and this year he had to find two new locations, one for the pigeon shoot and one for the dove hunt which was more than 30 miles away from the lodge where they stayed.  If we had done nothing, Inhofe would still be illegally using that federal land to hold his political events.

Bear in mind we were not the only animal protection group that received the tip about the 2014 Inhofe pigeon shoot - but we were the only organization that did anything about it. What we did by having an undercover investigator attend a powerful US Senator’s fundraiser was groundbreaking.

Last year we broke more new ground when we flew our Angel drone over Inhofe's shoot. An Inhofe thug shot the Angel, but we got it back and fixed for action this year. They couldn’t stop us.

No one has held Inhofe accountable for his wrongdoing as SHARK has, and we are not going to let up. Next year will be the biggest and most effective counter effort this cruel psychopath has ever seen.

SHARK has never organized civil disobedience before, but given the complete collapse of county and state law enforcement, and even the refusal of the FBI to do anything, we feel that civil disobedience is the logical and necessary next step. In 2017, when we face Inhofe, we will put ourselves on the shooting line to stop Inhofe’s vicious cruelty.

If you like what we have done to this point, and if you appreciate the massive effort it has taken to go against a powerful US Senator, then this is the time to support us. At this point, we no longer have the funds to continue our field work, and we are running out of money quickly to pay the few investigators we have on staff.

SHARK does what no other group will do. But we can’t continue to do it unless we receive major support from our supporters. Please, don’t allow the momentum we have built up for our nonhuman friends to be lost. 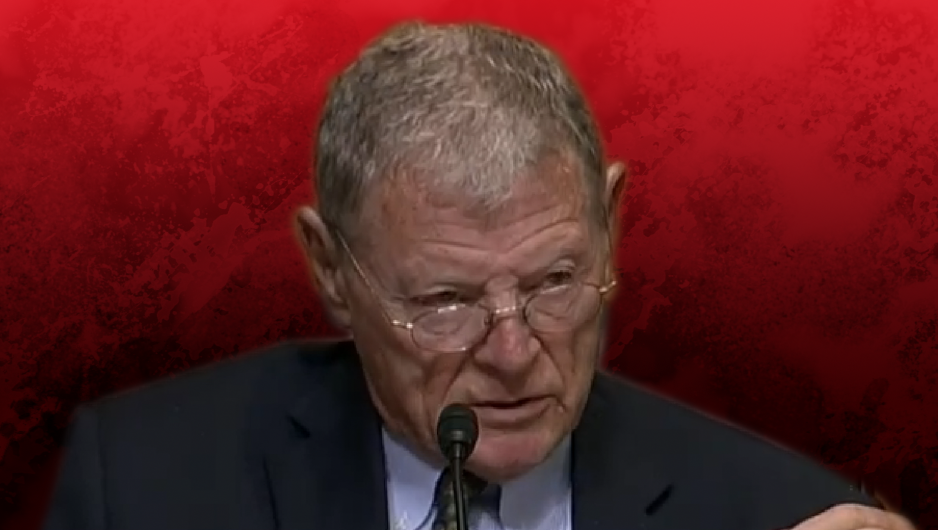 What kind of monster not only slaughters innocent birds for fun, but then leaves them to suffer slow and pain filled deaths? This kind. A sitting United States Senator who will violate the law and all sense of human decency. Incredibly, cowardly animal serial killer Jim Inhofe claims that he is a Christian, but this type of vicious cruelty is as un-Christian and un-American as you can get.