On March 10th, SHARK was at the Minnesota Horse and Hunt Club in Prior Lake, MN, to protest and document a 2,000 bird live pigeon shoot fundraiser on behalf of Ducks Unlimited (DU). This was a heinous event where birds were wounded and killed all for fun and so DU could pocket some money.

Our protest did not go without incident; one of the people from the club got physical with us and pushed his cell phone in our faces. We called the Scott County Sheriff’s Department. The sheriff’s deputies were professional and courteous. We apologized for having to call them, but the Ducks Unlimited harasser gave us little choice. 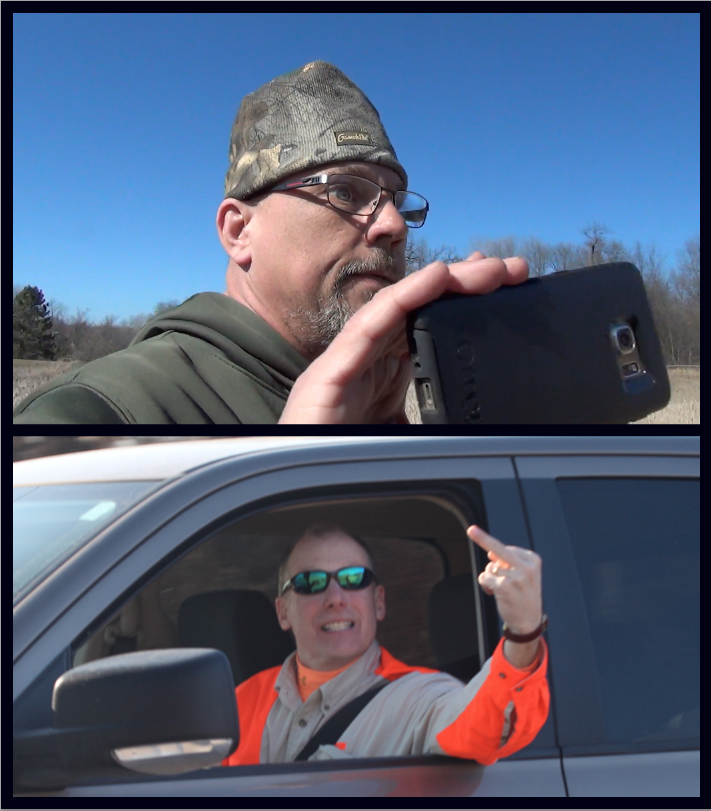 Above: The harasser who got into our faces. Below: One of the shooters showing off the highest number he ever scored on his IQ test
A short time later, another harasser went to work on us. We didn’t want to call the police again, and incredibly, the harasser did so, claiming we were committing hunter harassment, and were “scaring the game away.” This was laughable, because a pigeon shoot isn’t hunting, and you can’t scare away animals held in cages until the moment they are shot.

The police came out again, but then left the harasser unsatisfied. 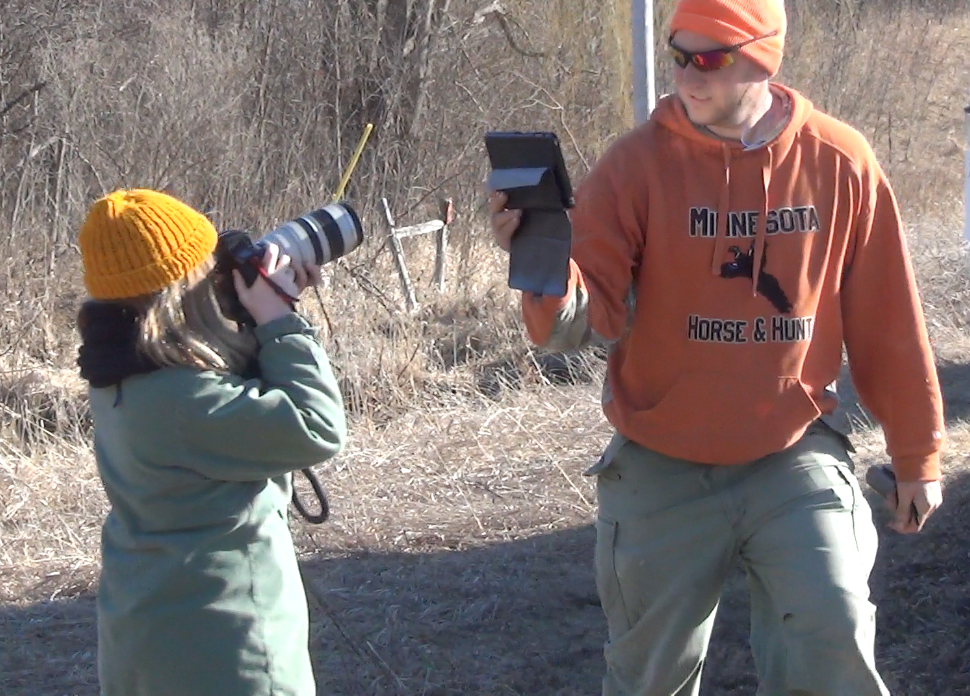 Another thug from the hunt club
Here’s the history of this campaign:

In 2014, SHARK contacted DU after learning about the annual pigeon shoot fundraiser. At that time, and due to the heinous nature of live pigeon shoots DU quickly shut the shoot down and replaced it with a clay target shoot. In an email sent to SHARK at that time, DU Senior Communications Specialist Matt Coffey explained the shutdown: "We have policies in place holding our staff and local volunteers to high ethical and moral standards, and do not condone wanton waste of wildlife or other animals. To avoid the potential for wanton waste, the event committee has decided to change the live pigeon event to a sporting clays shoot.”

In 2015, after clearly receiving pressure from those who take pleasure in the mass-slaughter of animals for fun, DU reversed itself without explanation and held a pigeon shoot fundraiser. This was a disgraceful act that has stained DU’s name and shown them to be both weak and cruel.

The pigeon shoot held last year and yesterday were just as vicious, wasteful and unethical as the one that was supposed to be held in 2014. DU’s cowardice by capitulating to pro-pigeon shoot pressure shows true immorality and hypocrisy, and DU sold its soul for the sake of a few dollars.

DU used to jam pheasant feathers into the backs of some of the pigeons to add to the "fun" of killing them. That stopped once we exposed this stupid and cruel practice
DU, panicked about being seen to be wasteful, added a note to their flyer for the event saying that they were going to give the dead birds to local families in need. Really? They are going to give shot-ridden decaying corpses to people to eat? We don’t think so.

In fact, when Senator Inhofe held his pigeon shoot fundraiser, they too claimed they were giving the corpses to the needy, but that was a total lie, as we proved in THIS video. 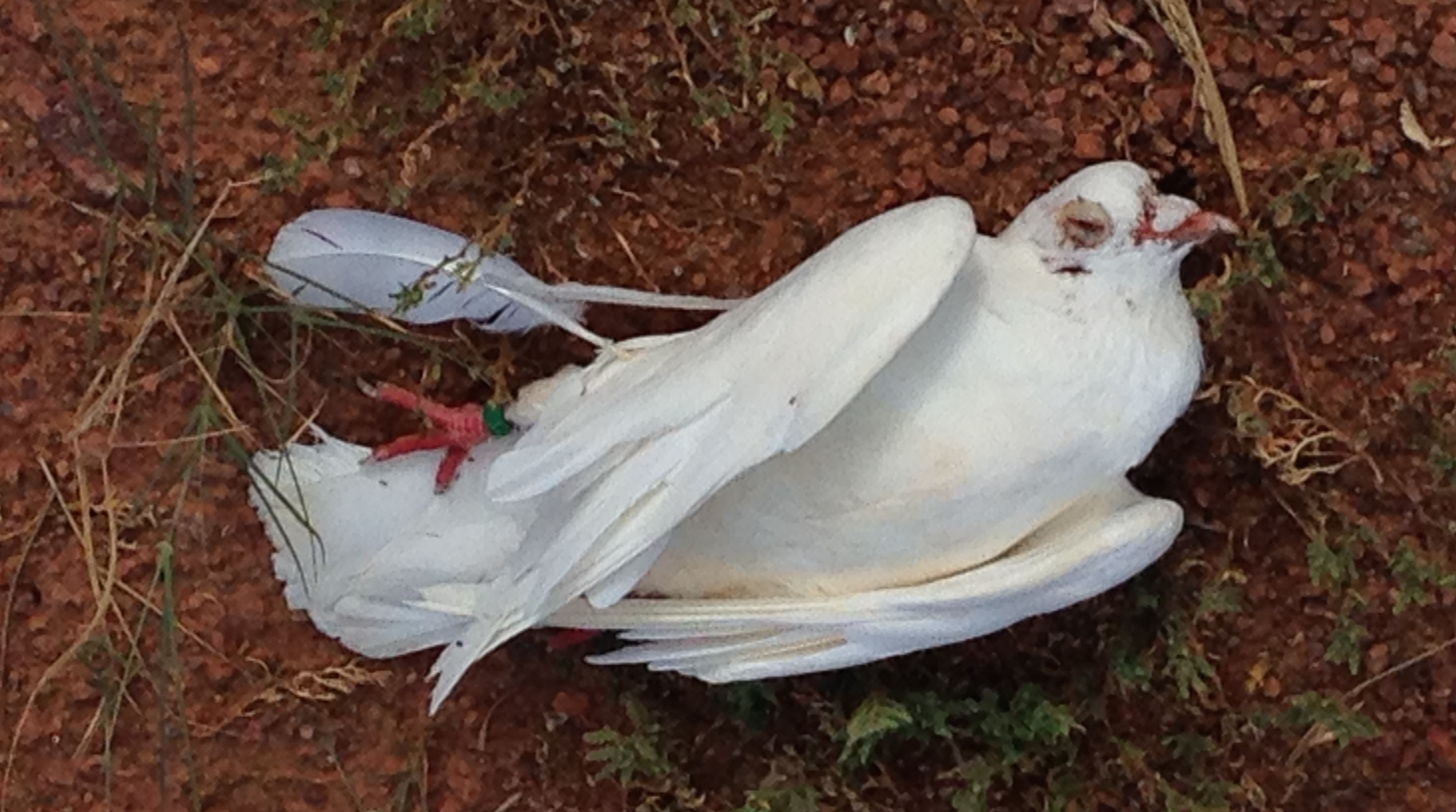 This was one of the many victims of Senator Inhofe’s pigeon shoot. They said people were going to eat these bodies, but in the end she was just thrown away as if garbage.
When people commit horrendous acts of animal cruelty, they often try to wash the blood from their names by saying that some poor person will eat the body that they shot for fun. Not only does this not in anyway negate the vicious cruelty they committed, but it also turns out to be not true to boot.

Please contact Ducks Unlimited and tell them that they have shamed themselves by holding a pigeon shoot when they admitted it was neither ethical nor moral. Also, challenge them to either prove that all those bodies were given to needy families, or apologize for lying about it. Please be polite and respectful.
1-800-453-8257

Dale Hal DU CEO:  This email address is being protected from spambots. You need JavaScript enabled to view it.

For years, the public has been lied to with the myth of California's Happy Cows. Happy Cows, it is claimed, produce better milk, cheese and other dairy products. 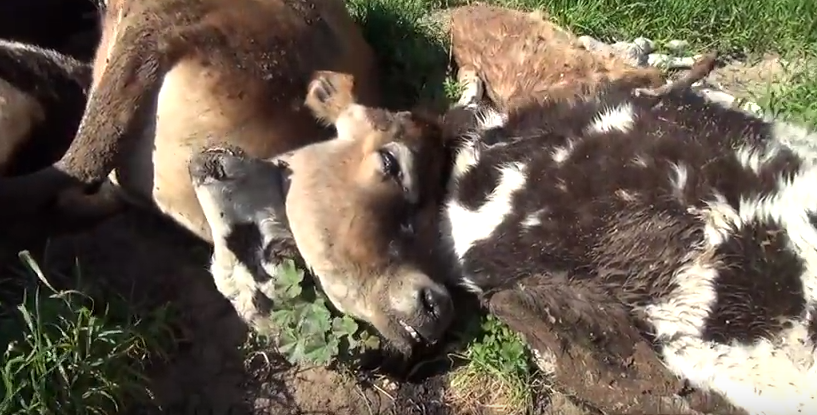 Two of the dead cows SHARK filmed in California
There's more here than just cruelty. In our upcoming videos, we'll expose the cowardice and corruption of a system that enables and encourages animal abuse and the destruction of our environment for profit.
Watch our new videos:

RE: WILLFUL NEGLIGENCE in the death of Lara Dewees

Lara Dewees is dead.  The death of this young athlete was directly due to failure to properly maintain the rodeo grounds and failure to properly manage the arena gate by an official judge with proper training.  She leaves an 18 month old son whose mother’s life was lost to willful negligence.

When are you going to make the necessary changes to prevent this tragedy from happening again?  All barrel racing associations tractor drag the pattern after five runners to maintain safe running conditions.  Why is the WPRA and WNFR so hesitant in protecting the contestant as well as her mount?  Lives of contestants and livestock are so fragile and yet you continue to neglect their needs.  This is not PROFESSIONAL!

The condition of the arena floor plays a major factor in whether or not a horse can maintain its footing when cornering sharply around the barrels.  This is not rocket science!  All major sporting events maintain the surface of the ground where the performance or competition is happening whether it’s show jumping, car racing, or tractor pulling contests.

According to veterinarians who care for show animals, the surface of the track or arena affects the health of the feet of these horses.  Constant pounding of the feet on undesirable ground conditions leads to soft tissue and ligament injuries.  Fractures can also occur during a fall resulting in euthanasia or a shortened career.  The WPRA should address their Class I and II prohibited substances and adjust  to AQHA guidelines.  A more strict rule should be in place and more testing should be allowed by the leaders.  The drug use and abuse in barrel racing horses is unacceptable.

I would strongly advise that you address the issue of adequate and safe arena ground conditions to prevent the loss of another life, be it horse or rider.  Depending on the nature of the soil, weather conditions and number of contestants, I would strongly suggest that a routine schedule of ground maintenance be instituted immediately and a rule written to implement drags on a shorter interval such as five runners as seen in other associations.