• CFD violating no "jerk down" rule.
Individuals concerned about animal welfare are present and legally videotaping rodeo events at the Cheyenne Frontier Days Rodeo (CFD) in Cheyenne, Wyoming. On Wednesday, July 17, 2013, those individuals filmed numerous cruel and dangerous "jerk downs" of young calves. A jerk down is where the calf is roped around the neck and flipped over backwards, landing on her head, neck or back.
Jerk downs are extremely violent. Jerk downs violate the humane rules of the Professional Rodeo Cowboys Association (PRCA) which sanctions CFD. From the PRCA Business magazine, published March 15, 2013:
"For the 2013 rodeo season, an industry wide no jerk down rule will be in effect. The “jerk down” will be defined in accordance with PRCA Rule R11.6.5 and will be enforced at all PRCA sanctioned events."
"CFD contestants repeatedly violated the rules by which they are supposedly governed, and PRCA did nothing," states SHowing Animals Respect and Kindness (SHARK) President Steve Hindi. "CFD and the PRCA are willing to endanger the health and safety of young calves for a show, and without responsibility. The PRCA's humane rules are meaningless, and the PRCA is a sham organization."
• Videographer harassed and threatened
While the videographer was filming the cruel jerk downs, one of the rodeo contestants, along with the mother of another contestant, not only tried to block the videographer's view and his ability to film the rodeo, but they made threats against him. SHARK is sending the following letter to CFD officials as well as the PRCA. SHARK is demanding that both be ejected from the CFD, and that the contestant be barred from all CFD events.

To CFD General Chairman Darin Westby and PRCA Commissioner Karl Stressman,
On July 17, 2013, two individuals violated the Cheyenne Frontier Days Code of Conduct when they harassed another person in the stands, and made threats against his safety. One of those individuals wore a patch identifying him as Contestant #19, while the other claimed to be the mother of a contestant,  With the same behavior, Contestant #19 violated the PRCA rules of conduct.
A video of the incident has been uploaded to YouTube, and can be viewed here: http://www.youtube.com/watch?v=wmCn08vzInU
The comment of the self-described mother includes:
"…we don't want you filming everybody because, when my son comes up and you film, there will be problems."
Contestant #19 declared that he was not going to let the person with the camera to film any more of the rodeo: "You're not going to get any more footage today," he said. Contestant #19 challenged the person with the camera to a fight when he said: "I'll tell you where my trailer is if you wanna settle this later."
The CFD Code of Conduct states:
"All Cheyenne Frontier Days guests are expected to maintain reasonable and appropriate behavior at all times. Any behavior defying the code of conduct as determined by CFD management can result in ejection. Ejected guests will not receive a refund for their tickets or be compensated in any way."
The code then lists the following, all of which these two violated:
• Standing on chairs/seats, aisles or blocking the view of other patrons
•  Fighting or challenging others to fight
• Violating any local, state, or federal laws [threats to safety]
The PRCA rules, B10.3.4 states that "Engaging in, or attempting to engage in, any action threatening, berating, harassing, or intimidating a rodeo official, a rodeo spectator…" would result in disciplinary action, including being "…subject to reprimand, fine, ineligibility, suspension…"
We are therefore demanding that both of these individuals be immediately ejected from CFD and not be allowed to return. Contestant #19 must be banned from all further events due to his specific challenge to fight, his repeated efforts to block the view of the person with a camera, and his statement that he would not allow any more filming that day, which presumes he would physically make that happen.
If these individuals are not ejected, then the CFD and PRCA is enabling the harassment and threatening of a law abiding attendee, and will be responsible for any harm that comes to him, or anyone else trying to simply use a camera.
Sincerely,
Steve Hindi
President, SHowing Animals Respect and Kindness.

Macy's is sponsoring the violently cruel California Rodeo, located in Salinas, CA.
From The Californian.com:

"Macy’s is also a corporate sponsor of the Rodeo, said Gina Vance, Macy’s manager in Salinas."

Last year at this same rodeo, a horse's leg was broken during a bucking event, and the horse was forced to continue bucking! It was truly a horrific sight, but it was worse than that; according to an eyewitness, the injured and suffering horse was left alone in a stall for 45 minutes before he was finally killed.
Click on the video below to watch what happened and what Macy's is sponsoring:
The leg of this horse broke during the bucking event and the horse hit the ground hard.
He would spend the next 45 minutes in incredible pain before being killed.
TAKE ACTION:
Please politely and respectfully contact Macy's and ask them to withdraw their sponsorship of this cruel and deadly rodeo.

You can contact Macy's Board of Directors on THIS web page.

Please also send an email to the following:


Rosser is well known to SHARK, as he has a long and cruel history of shocking horses to make them appear wild. As pressure and scrutiny from the humane community, rodeo committees and law enforcement have increased in the past several years, Rosser has gone from openly shocking horses to attempting to secretly shock them as SHARK’s cameras documented at the 2012 Reno Rodeo.


At the 2011 and 2012 Reno Rodeo, Rosser personnel were caught on video routinely shocking horses in violation of rodeo rules. The resulting story made national and international news. Video footage of the Flying U personnel shocking animals at the 2012 Reno Rodeo can be seen HERE.
Cotton Rosser’s people torment animals. That torment often includes electric shock. Sometimes the torment kills them. Rosser likes to market himself as a cowboy when in fact a real cowboy would never treat his animals so cruelly.
Please leave a comment on this story exposing Cotton Rosser's animal cruelty. Please also write to The Californian HERE and ask for space for a full rebuttal. 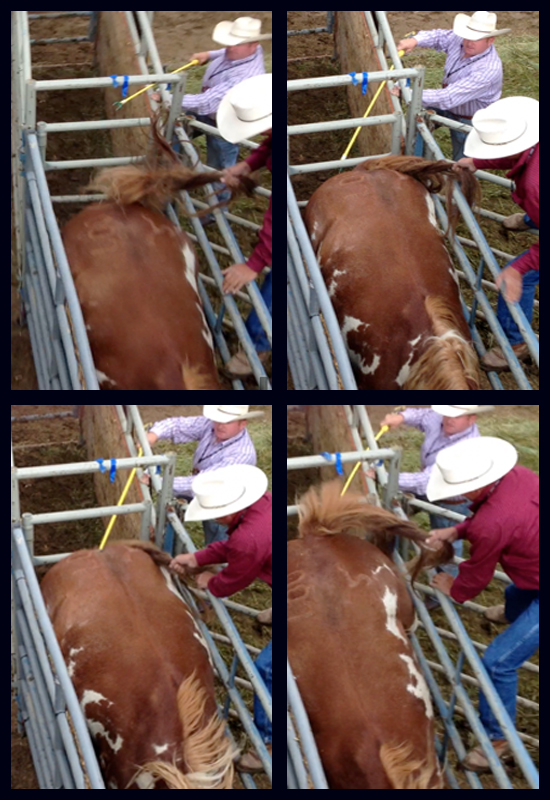 Cotton Rosser was the stock contractor for the recent Reno Rodeo, where these thugs
electro-shocked a horse in the backside.

Reprinted with permission from Animal People
Barnyard scrambles & turtle racing
RIVERDALE, California; DANVILLE, Illinois; EUGENE, Oregon; BELAIR,  Maryland––Video of a May 5,  2013 “barnyard scramble” at the Riverdale Rodeo in Riverdale, California obtained and posted online by Showing Animals Respect & Kindness brought the end of the event, the Fresno Bee reported on June 23,  2013.
“The five-minute video shows rodeo organizers tossing animals out of trailers and containers onto the arena floor before children are turned loose to chase them,” the Fresno Bee described.
“Once we had the evidence in hand, SHARK Investigator Mike Kobliska researched California law and found out that the scramble itself was illegal,” recounted SHARK founder Steve Hindi. “In addition to concerns over whether the scramble is cruel to animals, the California Penal Code makes it a misdemeanor to sell or give away ‘any live chicks,  rabbits,  ducklings,  or other fowl as a prize for, or as an inducement to enter, any contest, game or other competition or as an inducement to enter a place of amusement or place of business,’” Hindi recited.
The Central California SPCA “did nothing,” Hindi added. “Even worse, an SPCA spokesperson said ‘We haven’t been provided with any evidence of anything inhumane or illegal.’”
But the Fresno County Sheriff’s Office acted. “When our detectives contacted Riverdale Rodeo officials about it,  they had no idea they were doing anything wrong and agreed to discontinue the event,” sheriff’s office spokesperson Chris Curtice told the Fresno Bee. “It appears that educating them worked.”
Sugar Grove Nature Center environmental educator Jill Wallace and attorney Stephen Hedinger enjoyed similar success soon after the 49th annual running of a turtle-racing event held in Danville, Illinois. Responding to their complaint, the Illinois Department of Natural Resources advised the turtle race organizers “that collecting and holding so many wild turtles violates state conservation laws,” reported Tracy Moss of the Danville News-Gazette.
The Kiwanis Club in Bel Air, Maryland held an annual July 4 turtle derby as scheduled, however, despite requests from Maryland Department of Natural Resources to stop capturing turtles for the event and despite a warning from the Arizona-based Center for Biological Diversity, known for filing lawsuits to enforce conservation laws. The turtles are returned to the wild after the races, but handling them and relocating them is believed to spread ranaviruses,  a type of disease deadly to amphibians, transmissible by reptiles, and on the rise in Maryland.
Heather Crippen and her 18-year-old daughter, Alex Crippen, were comparably frustrated in trying to stop a “barnyard scramble” held annually by the Cottage Grove Riding Club as part of the Cottage Grove Rodeo in Cottage Grove, Oregon.
“The two operate Red Barn Rabbit Rescue in Creswell, a nonprofit group that cares for about 60 rabbits,” reported Josephine Woolington of the Eugene Register-Guard. “The two drafted a Lane County ordinance that would ban such events. The Greenhill Humane Society in Eugene and the Humane Society of Cottage Grove, which also has worked to ban the scramble, support the ordinance. Jeannie Peterson, vice president of the Humane Society of Cottage Grove, said the organization has tried for three years to ban the scramble.”
But, missing the point, Riding Club President Kelli Fisher announced that instead of rabbits, the July 13,  2013 barnyard scramble would feature chickens.
www.animalpeoplenews.org