DEAR FRIENDS,
Award-winning animal behavior expert and author, Marc Bekoff has called for a ban on using horses in rodeos for “entertainment” on July 8, 2013 in an article posted in Psychology Today. Bekoff called for the ban after viewing video posted by SHowing Animals Respect and Kindness depicting a 9-year old horse, Duke convulsing in the arena after being electrically shocked out of the bucking chute. Duke subsequently died. The video of Duke's death has gone viral and has already been viewed more than 100,000 times online.
Bekoff also called out the announcer at the rodeo for his “heartless” and “sickening” commentary telling the audience that horses do suffer injuries and equating them to family members. In the article, Bekoff goes on to say, “We also consider dogs to be family members and no one I know, and I'd like to think no one at all, would ever allow a dog to be treated in such a reprehensible way for ‘entertainment’. And horses do not suffer less than our ‘best friends’.” 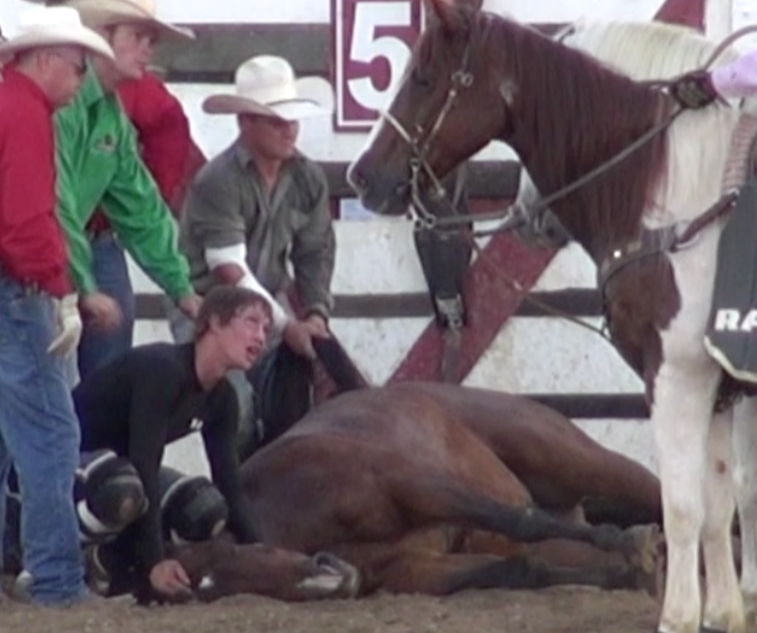 One of the rodeo violently thugs pulled on Duke's tail to move him while the horse was slowly dying.
Marc Bekoff is Professor Emeritus of Ecology and Evolutionary Biology at the University of Colorado, Boulder.
You can read the full article and post supportive comments HERE.
Video of Duke dying at the Cowtown Rodeo can be seen below:

In response to the outrage over the death of Duke, Grant Harris, owner of the Cowtown Rodeo, has claimed that Duke was not electro-shocked. To counter this, SHARK has released a new detailed video of Duke being electro-shocked.
Harris knows how bad this is and his only recourse has been to try to cover up what happened. This video goes frame by frame to show the brutal and cruel treatment Duke received before he finally died. The reality is that if Duke had not been in the rodeo that night, he would still be alive today.
The new video can be viewed HERE. 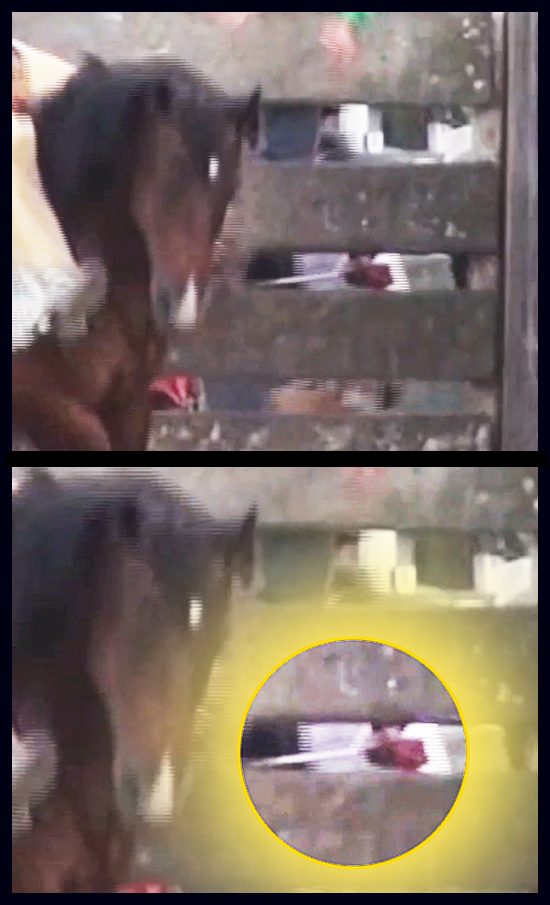 You can see the red handled electric prod moving away from Duke right after he was shocked. Duke fell to the ground and began to die 25 seconds later.

During the 2013 Reno Rodeo, SHARK was contacted by long-time Reno residents, Ellie and Stephen Lopez-Bowlan, who had accidently caught rodeo personnel electro-shocking a horse on her cell phone. Not only were they using electro-prods on both sides of the horse but in a sickening attempt to agitate the horse, they were also prodding his anus with a wire prod, slapping and pinching him hard.  When Mrs. Lopez-Bowlan shouted down to the men to stop hurting the horse, a rodeo volunteer told her she had to go inside and sit down. She has since had to file a report with the Washoe County Sheriff’s Office due to an abusive text messages she received a few days after her interviews appeared in the local media.
Rodeo President John Tipton had his excuses on hand denying any wrongdoing to the press. SHARK challenged the rodeo to investigate and bring charges against those involved but so far, they have refused.
Photos tell no lies, and it is clear that these Reno Rodeo personnel were using extreme cruelty to torture the poor horse into moving. Rodeo Executive Director Alan Kingsley subsequently stated to local paper, The Reno Gazette-Journal that the livestock contractor who was handling the horse would not be invited back but has refused to identify the actual personnel involved.
You can read the story HERE.


While whistleblowers like Ms. Lopez-Bowlan are exposing the truth, the rodeos are running scared. Their reaction to videotaped abuse at their events? Ban cameras. In this article, you can read exactly how rodeos are fighting against the abuse that has been exposed:
Rodeo is up against a powerful and vocal adversary armed with media in all its forms: social media, multimedia and the sympathy of the mainstream media. I first learned of the cattle prod charges by reading about in a British newspaper. In the light of this type of media blitz, it’s up to rodeo to grit its timeworn teeth and find a way to cowboy on. Some of the new-thinking ways they have been doing that have been to increase transparency, humanize the stock contractors and educate the public about what goes on backstage.
All that, while at the same time adding fine print to tickets that forbid videotaping or photographing rodeo events. Keep your cell phone in your pocket if you want to enjoy the rodeo this summer, and be careful what the bumper stickers on your truck have to say.
That rodeo stock contractors need to be humanized speaks to their inhuman nature and inhumane treatment of animals. That they ban cameras says everything about the brutality committed at rodeos.
Click on the picture below to view our latest video on the Reno Rodeo titled:
"Reno Rodeo Caught Shocking Horses for Third Straight Year!" 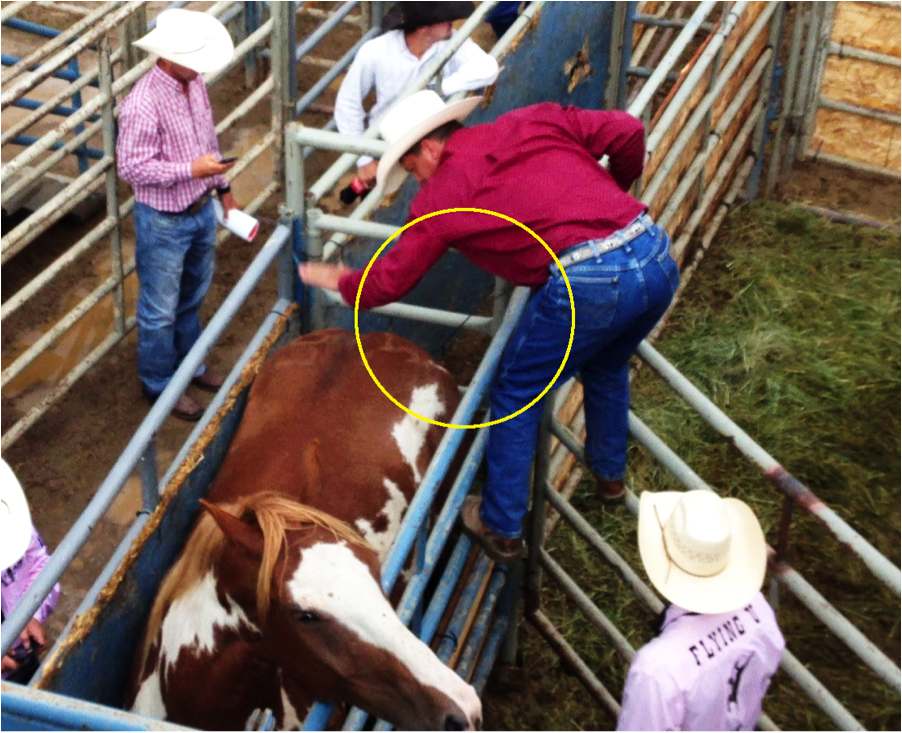 In this picture, you can see the wire used on the horse by the rodeo handler.
This horse was also electro-shocked.