Abuse at rodeo can't be condoned

Rodeo can be a rough sport where animals, and probably more often, participants can be injured. The participants know this going into the sport, and the injuries that occur to the animals are not supposed to be intentional. 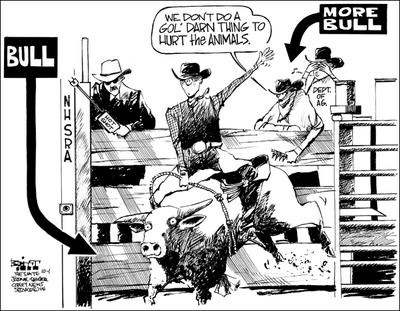 A horse running at full gallop, a steer wrestled to the ground or a calf being roped can lead to animals and/or people being injured.

What no honorable rodeo participant would do and what no rodeo or agricultural should condone, however, is to intentionally violate cruelty standards. It appears such behavior went on this past summer both at the National High School Finals Rodeo held here in Springfield and at the state finals in Altamont.

As detailed in the story today by reporter Bruce Rushton, it appears clear that animals at the rodeo were shocked to enhance their performance – in other words, to make them buck harder. Some sort of jabbing device was also used on bulls during the bullriding competition to make the huge animals come out of the chute more ferociously.

We suspect such abuse is not uncommon at rodeos, but that doesn't make it right. The rodeo association itself has rules banning such behavior. And in previous instances, the state Department of Agriculture, which acts as both a sponsor and an overseer of the event, has issued warnings for the electro-shocking of competition animals.

It appears this year both rodeos and state officials were more interested in turning a blind eye than they were in keeping the competition clean. That is a problem for more than just the animals being abused.

The National High School Finals Rodeo overall is a wonderful event. Springfield is understandably proud to have been selected to host the competition in both 2000-01 and 2005-06. in fact, our newspaper has been a sponsor of the event each year.

The rodeo brings high school champion rodeo athletes from a majority of the states as well as Canada and Australia. More than 1,500 athletes and their friends and families descended on Springfield to compete at the state fairgrounds this past summer.

Engaging in abusive techniques demeans the rodeo in which these young people participate. The competitors do not need nor should anyone condone what amounts to cheating – especially when that cheating also involves the abuse of an animal.

Such behavior also creates problems we are sure the National High School Rodeo Association would prefer not to have.

We have been told the rodeo association chose Springfield as a site in part because there is a desire among the group to make rodeo a more popular sport east of the Mississippi. Videos of electric cattle prods and jabbing devices being used on animals will make it tough to gain new fans for the sport in an area where the "cowboy culture" is an alien concept and many people describe cows as cute.

There is one way to mitigate the PR damage from such videos. End the abuse so it can't be videotaped.