For more about SHARK's campaign to stop cruelty at the CFD Rodeo, and more photos and video, go to ShameOnCheyenne.com.

SHowing Animals Respect and Kindness (SHARK), an Illinois-based group, has accused the staff of the Harry Vold Rodeo Company of shocking bucking horses in the chutes at last week's Frontier Days to make them perform better in the rodeo arena.

"They were trying very, very hard to not let people see it," said SHARK President Steve Hindi, who attended the rodeo. "...For every horse we caught being shocked, there was one we probably missed."

This horse is being shocked in the neck, against both the PRCA's "humane rules" and the prod device manufacturer's recommendations. 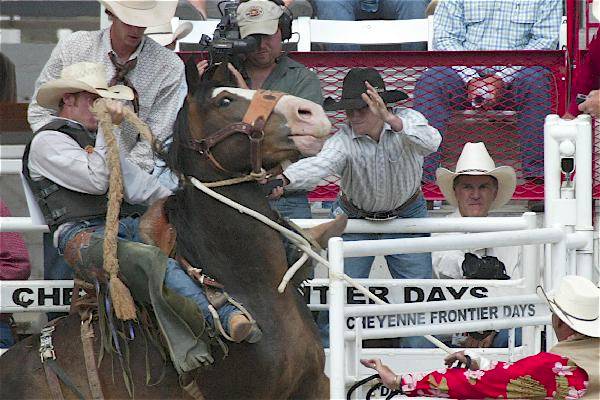 Cindy Schonholtz, the animal welfare coordinator for the PRCA, said four PRCA judges worked the chutes at Frontier Days, and none reported a violation of the group's animal welfare rules.

"Everything we know of, all the rules were followed," Schonholtz said.

PRCA rules limit the use of electric prods to "only when necessary" on the hip or shoulder. PRCA sanctions vary from small fines to expulsion from the organization.

In an e-mail to the Casper Star-Tribune, the Denver Post and the Wyoming Tribune-Eagle in Cheyenne, SHARK accused employees of the Harry Vold Rodeo Company of breaking the PRCA's rules on animal welfare with "consistent shocking" of bucking horses.

The e-mail claimed, "This year's winner of the Saddle Bronc event won the title while riding on a bucking horse that had been electrically shocked in the chute." The e-mail did not specify the contestant, nor the horse, and Hindi was unclear on the contestant mentioned in the e-mail.

Taos Muncy of Corona, N.M., won the saddle bronc aggregate title, while Heith DeMoss of Crowville, La., and Cody Horwedel of Cholame, Calif., split first place in the championship round.

The Cheyenne Frontier Days rodeo committee said in a press release the PRCA's rules were followed.

The statement also said Frontier Days officials met with judges, stock contractors and stock handling personnel every day and "emphasized our commitment to proper care of both animal and human performers."