On the Menu and on the Docket; Legislators Look at Fowl Foul Play

NOTE: In the article below the video-screened truck referred to in reference to the foie gras ban, is SHARK's own Tiger Truck. To learn more about the Tiger and see photos and video of this revolutionary tool, click here.

"I have moved five times in order to raise and fight my game cocks," a fourth generation cockfighter from Oklahoma recently wrote in an email. "Most of my friends moved to Louisiana and New Mexico (now banned there too) or overseas in order to fight cocks...Cockfighting is not for everyone. Neither is church or hunting, bike rallies, dog fighting (not for me) but we live in a country that is suppose [sic] to be free." 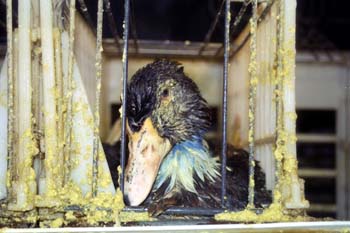 The man, who describes himself as 50 years old, the father of three and having no education beyond the sixth grade, is not alone in feeling vilified.

As Louisiana prepares to ban cockfighting like New Mexico earlier this year, soon to be unemployed cockfighters are livid.

"Lentini [Sen. Art Lentini, R-Metairie, ban sponsor] what is the cockfighter to do with his cocks?" implores a commentator on the New Orleans Times-Picayune web site. "If you have any fighting material such as moleskin, gaffs, knives, shipping boxes, drop pens, boxing gloves, gamecock feed, the list goes on you are guilty and subject to $1000 FINE and six months in jail for every count. Without a phase out the cockfighter becomes a criminal overnight."

Rodney E. Bourgeois of Vacherie, LA, who describes himself as a husband, father, grandfather, Louisianian, veteran and cockfighter agrees. "The government sells licenses to hunt duck, quail, rabbit and deer," he writes in Lafayette's Daily Advertiser. "Ask yourself, every one of you trying to ban cockfighting, 'Would I like to be a duck flying 2,000 miles to the South to a shotgun blast or a game fowl in a cockpit, who stands a fighting chance?'"

Everyone knows cockfighting is, well, a dead duck in Louisiana. Not just because it's the last state to permit the bloody spectacle but because private and public investment groups involved with Hurricane Katrina restoration won't tolerate such backward practices.

But lawmakers from Louisiana's cockfighting regions are trying to keep the "sport" alive by stalling Lentini's bill until next year when a new, presumably less hostile legislature is seated.

"Cockfighting is part of our tradition in south Louisiana, like it or not," said Sen. Don Cravins, Jr., D-Opelousas who blocked the bill last year. (No kidding. Two hundred years ago Louisiana newspapers invited the public to the "Interesting Exhibitions" of "Six Bulldogs Against a Canadian Bear" and "Twelve dogs Against a Strong and Furious Bull," with winners receiving firecrackers on their backs. Admission for children was fifty cents.)

"Cockfighting is a business in south Louisiana, like it or not."

Nine hundred miles to the north in Chicago a parallel battle rages. 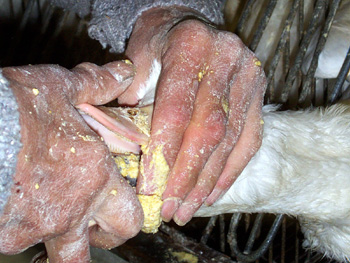 A group of alderman are trying to overturn the city's year old ban on the sale of foie gras- from the engorged livers of force fed ducks and geese--with an obscure legislative maneuver before a new City Council is seated. Chicago was the first US city to ban foie gras, widely believed to be cruel and gratuitous.

In May, the Chairman of the City Council Committee on Health, Alderman Ed Smith, resigned over efforts to force a foie gras repeal ordinance from his committee. The Mayor accepted his resignation.

"We have real issues here in this city," said Chicago Mayor Richard Daley when the ban was passed in 2006. "Let's get some priorities." He added the issue was "silly."

But of course there's nothing silly about the dollars generated by foie gras sales for restaurants and Daley's former chief-of-staff, Sheila O'Grady, is now Executive Director of the Illinois Restaurant Association which has sued against the ban and is spearheading the repeal.

Though socioeconomic opposites, both cockfighters and foie gras producers like to point out the existence of crueler animal practices--as if two wrongs make a right--and how what they do is "natural" for the animal. They like to invoke their freedom to make a living as they wish, the culinary or cultural traditions they operate from and the fact that it's just a lowly bird. 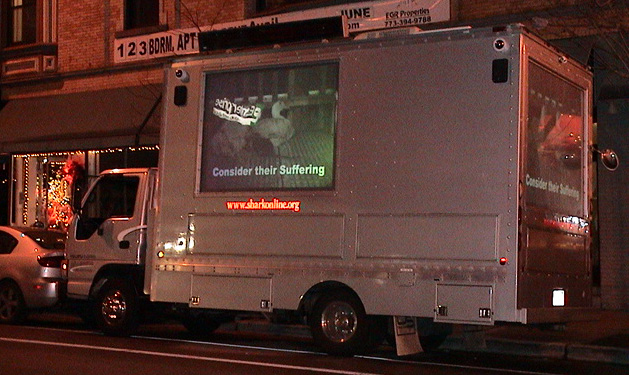 But viewers of a truck sized video screened at a New Year's Eve vigil at a pro foie gras restaurant, XO Chicago, didn't see traditions or lowly birds. They saw ducks bleeding from the neck and rectums, vomiting, losing their bodily fluids and suffocating as they endured yet another force feeding and rats nibbled on their open wounds.

They say a cockfight is not much prettier.