No Need to Shoot Pigeons in Pennsylvania

Randy Santucci, president of the Unified Sportsmen of Pennsylvania, poses a loaded question in his editorial to Chambersburg Public Opinion. He asks, “what are the factual, substantive, societal or economic benefits of not shooting pigeons?” And along with his contempt for those “animal rights zealots” among us, he also doubts the relevance of a Pennsylvania House Bill banning the consumption of cats and dogs. A bill that would only seem irrelevant to someone who doesn’t keep up with current events in Pennsylvania.

Much like the issue of eating dogs and cats, the need to pass a law explicitly banning pigeon shoots arose because people treating pigeons inhumanely have failed to be held accountable under Pennsylvania’s existing animal cruelty statues. That’s what the amendment attached to House Bill 1750 is all about.

But cruelty and suffering aside, banning pigeon shoots makes good substantive sense, even for those people bothered by pigeons. Santucci bemoans the strain on tax dollars that poisoning pigeons creates, and he offers pigeon shoots as a better solution for dealing with their population. Factually speaking though, holding live pigeon shoots actually makes matters worse because missed birds escape into the surrounding area. Even if only 2 out of every 10 birds get away, a 1000-bird shoot would still release 200 pigeons into a new environment. This exacerbates "the nuisance" that farmers face, hurting Pennsylvania’s agricultural industry more than helping it. In effect, these events are economically harmful for both city municipalities that pay for pigeon removal and Pennsylvania landowners that unwittingly receive new birds after a local shoot takes place. 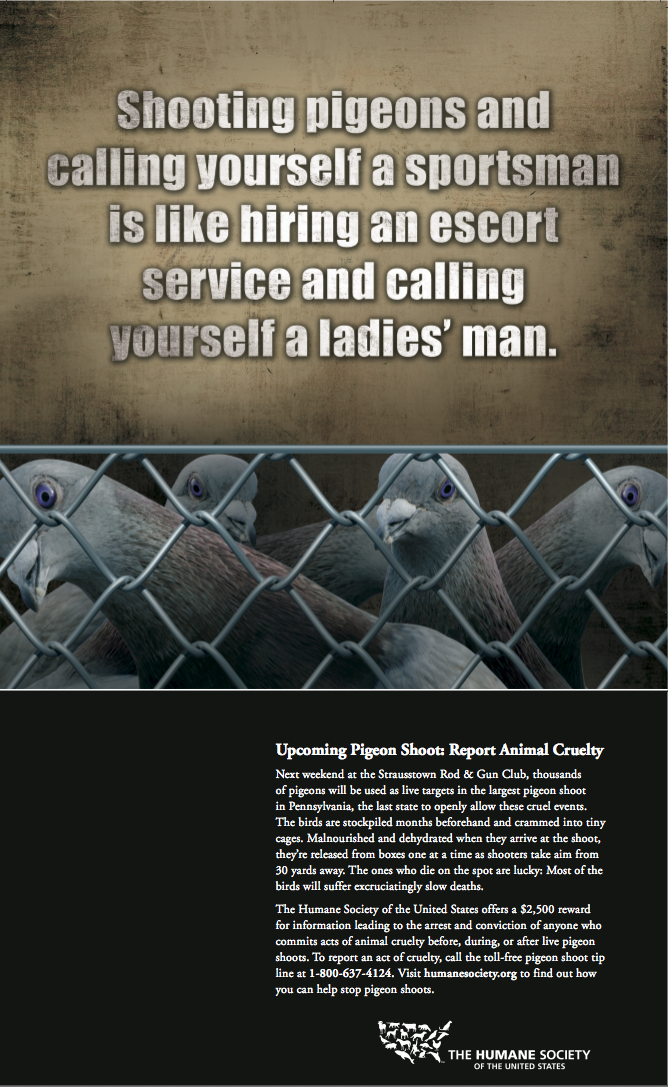 And since Santucci brought it up, poisoning pigeons does not decrease their numbers, it encourages their reproduction cycle. Pigeons breed up to the supply of the food level, so killing off a flock merely creates an opportunity for more birds to come in and replace them. Communities that try to control pigeons through killing efforts only make pest control companies more profits, since they have to come back to re-kill once the population bounces back. If Santucci was sincerely concerned about tax dollars, he would encourage municipalities to look at more effective methods to curb pigeon populations. Basel, Switzerland, built designated areas for pigeons, enabling officials to limit their food supply and remove eggs, halving the population after a little more than 2 years. Paris began installing pigeon lofts throughout the city in 2008 as a measure to reduce the amount of pigeon droppings damaging buildings and monuments

And here’s another fact—despite the moniker “rats with wings,” studies have shown that pigeons play a minimal role in spreading diseases like avian influenza. Pigeons play such a negligible role, that the Pennsylvania Game Commission and New York State Health Department do not require dead pigeons to be reported or saved and tested for the flu.I sent the Centers for Disease Control and Prevention an inquiry about whether pigeons or pigeon droppings pose a health risk to the average person. They responded on June 30, stating that “normal exposure to pigeons or their feces (which is infrequent) to healthy individuals poses little risk.” Rather, risk of getting disease from pigeons largely depends on factors such as person’s immune status, the volume of feces they are exposed to, and the ventilation of the environment where they encounter feces. So the fact is, the “disease carrying aspects” of pigeons are largely overplayed.

But I think perhaps even more so than these factual, substantive and economic benefits of NOT shooting pigeons, are the implications for American society. Especially with the Fourth of July looming, treating these birds humanely and allowing them to live is a great way to honor the thousands of pigeons who served in the United States Army and saved the lives of Allied troops during World War II. Pigeons braved Nazi bullets to protect U.S. armed forces in the line of duty; wouldn’t we be better as a society if Pennsylvania banned shooting them as live targets?