Success! SHARK forced the university to spend close to $1,000,000 upgrading the living conditions for the bears. Not a total victory, but it made an immense difference in the lives of these innocent prisoners.

In August 2002, SHARK launched a campaign to help Joy and Lady, two young black bear sisters held as mascots by Baylor University in Waco, Texas. You might think that especially being Christian University, Baylor would treat its mascots well. This was not been the case. 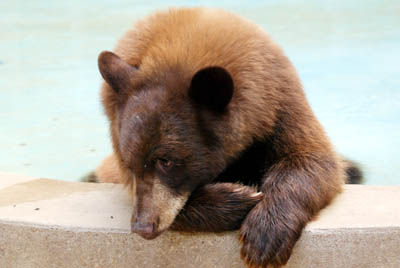 Six-month-old Lady paced and cried in an area half the size of a one-car garage. 18-month-old Joy wandered in circles. Her drinking water was a pool polluted with her own feces--which was also her only way to cool off in the Texas heat.

Baylor has used, abused, and either killed or discarded over fifty bears in the past 80 years. They are dragged to football games and other events, even though black bears are shy by nature and do not wish to be around humans.

At about age two, when the bears are no longer cute and cuddly, they are dumped. Accredited sanctuaries will no longer take Baylor’s bear castoffs, so Baylor’s last bear went to a facility that sells some bears to slaughter for human consumption!

Public pressure has now forced Baylor to make certain positive changes. These have been accomplished by the Baylor Chamber of Commerce, the fraternity that cares for the bears. The fraternity has discontinued its loud, raucous parties held weekly at the bear pit. The pit was surrounded with loudspeakers blaring rock and rap music which terrorized the already highly stressed and beleaguered bears. Joy and Lady were put into smaller enclosures within their habitat so that students could romp in their small pools. Students were even filmed on top of the bears' cages, in spite of the fact that bears are highly stressed with viewed from above.

In spite of efforts by Baylor police officers to keep SHARK video cameras away from the parties, SHARK investigators videotaped the outrageous behavior. Incredibly, and in spite of video clips exhibited on SHARK's website, Baylor officials denied there were any parties.

The absurd lie was exposed in a June 2003 National Geographic documentary that included SHARK's undercover footage of the "nonexistent" parties. Ironically, a sign was erected at the pit telling people to "Respect the bears," and this specifically requested that people not make loud noises around the bears.

SHARK applauds the changes undertaken by the Baylor Chamber of Commerce.

As was the norm during the campaign to help Joy and Lady, Baylor administrators refused to be truthful. Their propaganda claimed a new habitat will cost $600,000. Bear experts and Texas zoo and sanctuary managers say that a top-notch habitat could be built for no more than $100,000. This amount of money is a pittance for Baylor – an incredibly wealthy college.

How much money does Baylor have? Consider the following. According to a Baylor graduate currently pushing for a new bear habitat, Baylor is spending BILLIONS of dollars on its new building projects.The Baylor regents recently gave authorized President Robert Sloan's request to purchase a 2.3 million dollar jet for the school. Additionally, one of Baylor towers is literally covered in gold! 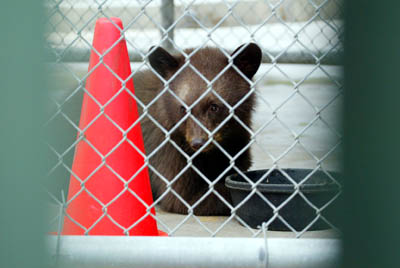 In claiming a price tag of $600,000 for a new habitat, Baylor was attempting to use the concern of compassionate people to build itself another monument. Baylor administrators continued to amaze us with their underhanded tactics, and it appeared there was no depth to which they would not stoop.

Baylor's leaders' claim of poverty when it comes to properly caring for its "mascots" reeked of hypocrisy. However, if Baylor was unwilling to care for Joy and Lady properly, it needed only allow them to go to a sanctuary, but that is where President Sloan and the regents demonstrated their truly cruel nature by refusing to either give Joy and Lady proper care or allow them to go somewhere where they can have a good quality of life.

Finally Success! SHARK forced the university to spend close to $1,000,000 upgrading the living conditions for the bears. Not a total victory, but it made an immense difference in the lives of these innocent prisoners. In addition, the students were forced to no longer hold raucous parties in the bear's enclosure and the bears are no longer forced to attend the Baylor football games. Additionally the bears are no longer feed Dr. Pepper and other junk food. They no longer rotate the bears like people leasing new cars. All that and more changed because of our campaign.

Read about SHARK's campaign to help the Baylor Bears through the media here.

See the photographs of the horrible conditions of the Baylor Bear enclosure here.

A rare example of intelligent coverage regarding the nature of hunting, National Geographic produced a one-hour special exploring the complexity of issues surrounding hunters. As part of this documentary, National Geographic did a segment on the efforts and convictions of SHARK's president, Steve Hindi. A former hunter, Steve's awakening to the harsh truths in hunting after attending the infamous Hegin's Pigeon Shoot is explored. Hunting in America also helped bring strong public attention to SHARK's Baylor Bear campaign by further exposing the horrid conditions under which these bears were kept on campus. Don't miss this insightful piece of television journalism.