CFD violating no "jerk down" rule.

Individuals concerned about animal welfare are present and legally videotaping rodeo events at the Cheyenne Frontier Days Rodeo (CFD) in Cheyenne, Wyoming. On Wednesday, July 17, 2013, those individuals filmed numerous cruel and dangerous "jerk downs" of young calves. A jerk down is where the calf is roped around the neck and flipped over backwards, landing on her head, neck or back.

"For the 2013 rodeo season, an industry wide no jerk down rule will be in effect. The “jerk down” will be defined in accordance with PRCA Rule R11.6.5 and will be enforced at all PRCA sanctioned events."

"CFD contestants repeatedly violated the rules by which they are supposedly governed, and PRCA did nothing," states Showing Animals Respect and Kindness (SHARK) President Steve Hindi. "CFD and the PRCA are willing to endanger the health and safety of young calves for a show, and without responsibility. The PRCA's humane rules are meaningless, and the PRCA is a sham organization."

While the videographer was filming the cruel jerk downs, one of the rodeo contestants, along with the mother of another contestant, not only tried to block the videographer's view and his ability to film the rodeo, but they made threats against him. SHARK is sending the following letter to both CFD officials as well as the PRCA. SHARK is demanding that both be ejected from the CFD, and that the contestant be barred from all CFD events.

On July 17, 2013, two individuals violated the Cheyenne Frontier Days Code of Conduct when they harassed another person in the stands, and made threats against his safety. One of those individuals wore a patch identifying him as Contestant #19, while the other claimed to be the mother of a contestant,  With the same behavior, Contestant #19 violated the PRCA rules of conduct.

A video of the incident has been uploaded to YouTube, and can be viewed here: http://www.youtube.com/watch?v=wmCn08vzInU

"…we don't want you filming everybody because, when my son comes up and you film, there will be problems."

The CFD Code of Conduct states:

"All Cheyenne Frontier Days guests are expected to maintain reasonable and appropriate behavior at all times. Any behavior defying the code of conduct as determined by CFD management can result in ejection. Ejected guests will not receive a refund for their tickets or be compensated in any way."

The code then lists the following, all of which these two violated:

• Standing on chairs/seats, aisles or blocking the view of other patrons

•  Fighting or challenging others to fight

• Violating any local, state, or federal laws [threats to safety]

The PRCA rules, B10.3.4 states that "Engaging in, or attempting to engage in, any action threatening, berating, harassing, or intimidating a rodeo official, a rodeo spectator…" would result in disciplinary action, including being "…subject to reprimand, fine, ineligibility, suspension…"

We are therefore demanding that both of these individuals be immediately ejected from CFD and not be allowed to return. Contestant #19 must be banned from all further events due to his specific challenge to fight, his repeated efforts to block the view of the person with a camera, and his statement that he would not allow any more filming that day, which presumes he would physically make that happen.

If these individuals are not ejected, then the CFD and PRCA is enabling the harassment and threatening of a law abiding attendee, and will be responsible for any harm that comes to him, or anyone else trying to simply use a camera.

The self-proclaimed mother of one of the contestants: 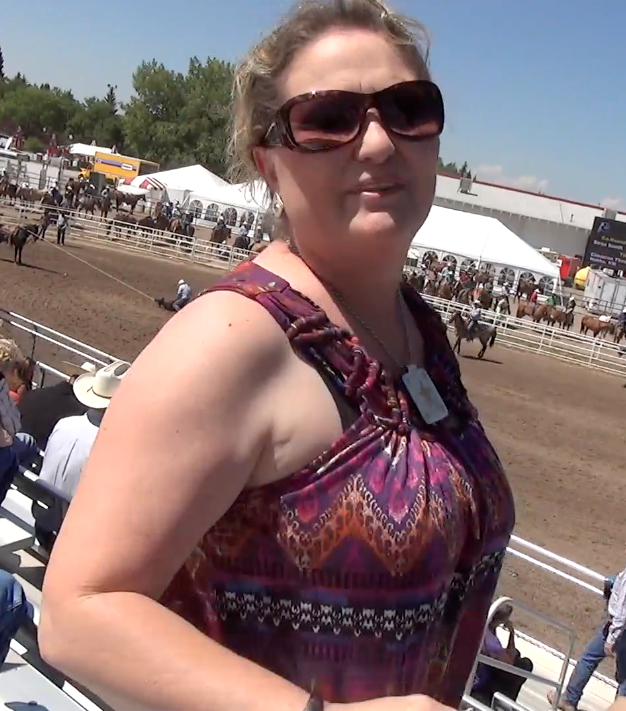