How the Buck Starbucks Campaign Began 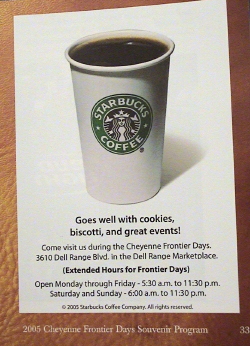 The Starbucks controversy began in July 2005, when SHARK investigators discovered that Starbucks was buying ad space in a program for the Cheyenne (Wyoming) Frontier Days Rodeo. This is one of the most cruel and brutal rodeos in the country. As has been documented with pictures and videotape by SHARK investigators, many animals are injured and some are killed.

On the right is the photo of the actual Starbucks ad as seen in the 2005 Cheyenne Frontier Days Souvenir Program that kicked off this campaign.

The Cheyenne Frontier Days rodeo includes an event called single steer roping (also known as steer busting or steer tripping). Steer busting is so brutal and cripples and kills so many animals that it is allowed in only a handful of western states.

Starbucks would have liked its consumers to think the company's support of the Cheyenne Frontier Days Rodeo was an isolated incident. However, subsequent research revealed that Starbucks was sponsoring a number of rodeo events in multiple states, including Texas, Missouri and Washington State. As is our policy, SHARK attempted to contact Starbucks to give them an opportunity to look into our allegations against rodeos and do the right thing. Starbucks refused to so much as respond to our private inquiries.

When SHARK went public about Starbucks’ rodeo sponsorships, its public relations people first stonewalled concerned customers -- an oddity for a company claiming to be “socially responsible” or “ethical.” Faced with a rising number of inquiries, Starbucks next issued a statement claiming that it merely took out one advertisement in the Cheyenne rodeo program.The apparent attitude was that supporting animal abuse on a small scale was acceptable.

Interestingly, Starbucks did not responde to the fact that it had also sponsored rodeo events in other parts of the country, including having the noteworthy title of being a “Gold Spur Sponsor” of a rodeo in Belton, Texas. Starbucks also joined a number of rodeo organizations and the Washington Trappers Association to sponsor a rodeo event in the state of Washington. Additionally, Starbucks was a sponsor of the American Royal Rodeo which has for two straight years been exposed for cruelty and violations of even the “humane rules” of the sanctioning rodeo association.

The question is whether sponsoring cruel events that maim and kill animals is something positive. Apparently Starbucks believes that answer to that question is yes, while most of its customers across the US and beyond who have looked at this issue disagree. By viewing the photograhs below and elsewhere on this site, we hope you take the opportunity to look at the issue for yourself and decide.

It is worth noting that Starbucks' Chairman Howard Schultz, as well as other Starbucks executives have a somewhat questionable view of animal abuse. The 2003 Starbucks shareholders meeting included a video skit showing Chairman Howard Schultz superimposed into a crowd running with the bulls in Pamplona, Spain, wearing a traditional white outfit with a red scarf and sash.

Howard Schultz is obviously an intelligent man. Therefore Schultz is surely aware that the bulls involved in this Spanish spectacle are running to a bullring, where over the following few days they will all die at the hands of groups of armed men. People with a sense of humane treatment don’t find bullfighting to be socially responsible or ethical. But again, we are happy to provide pictures so people can decide for themselves.

Beyond the question of treating animals humanely, one might ask if Schultz and Starbucks truly understand the meaning of ethics and social responsibility. Check out this site and www.RodeoCruelty.com to learn more about Starbucks and rodeos, and then decide for yourself if this is a flagship company for progressive attitudes, or merely a fraudulent greenwashed opportunist.

The graphic images shown below were documented at the annual Cheyenne Frontier Days Rodeo in Cheyenne, Wyoming, 2005, and proudly supported by ad dollars from Starbucks. Be prepared to see photos taken by SHARK investigators that make the suffering all too clear. For a more extensive look at SHARK's documentation of the Cheyenne Frontier Days Rodeo, click on the links in the left column. Starbucks should be ashamed to sponsor such abuse! 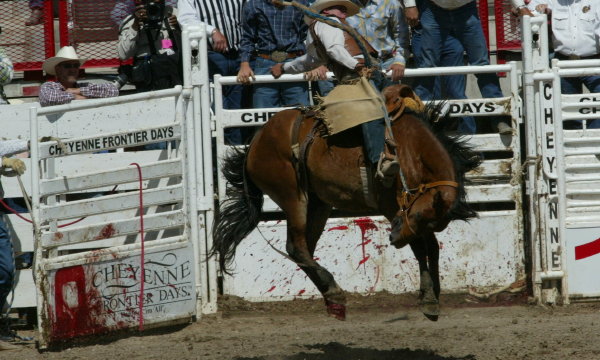 This horse was used in spite of an injury to its hoof. The blood spatters inside the chute shows that this wasn't the first injured animal used. 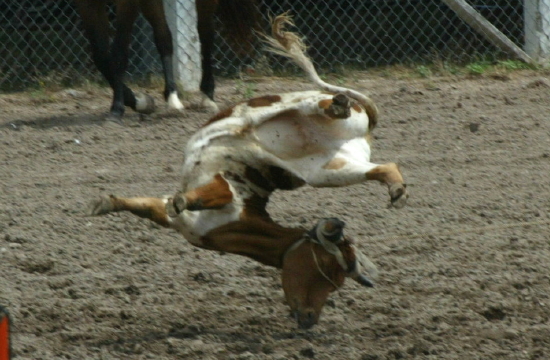 A steer is impossibly contorted during an event that used to be called "steer tripping" or "steer busting. It is the most cruel and dangerous event in rodeo. The name of the event has now been changed to the more politically correct "steer roping." The name may be changed, but the abuse remains the same. 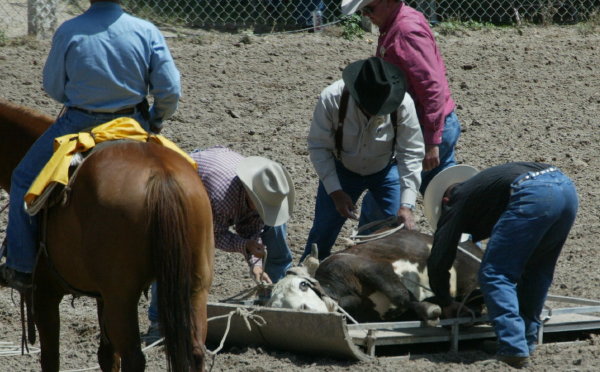 Injuries at the Frontier Days rodeo were common. Starbucks should not support such cruelty. 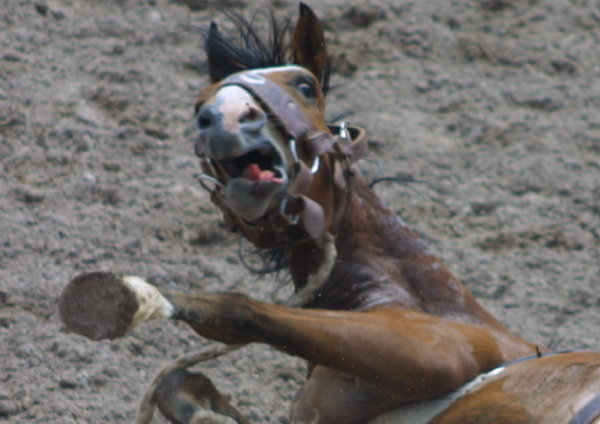 Words cannot describe the terror felt by these animals. 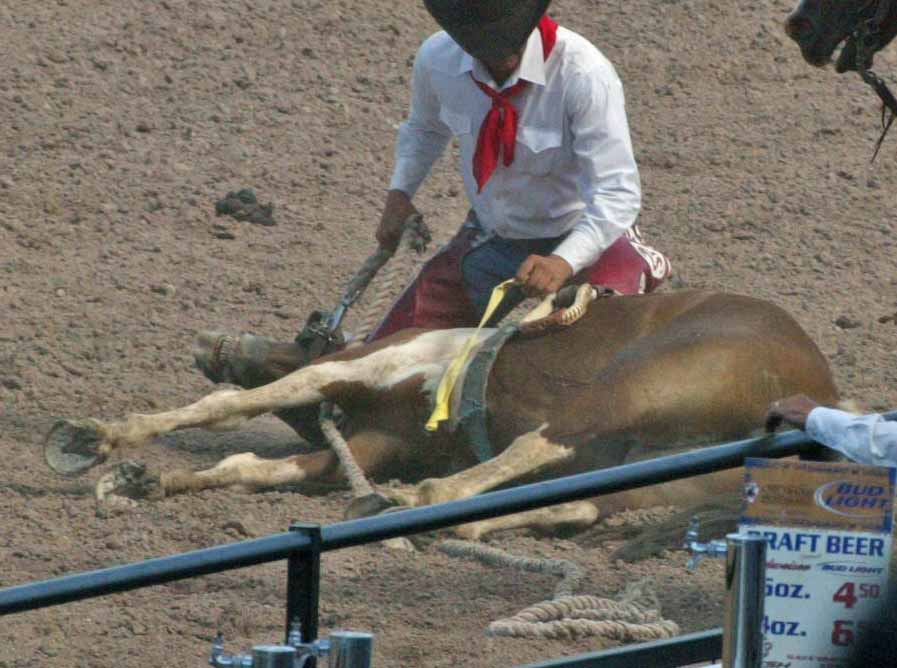 This horse was killed in the "wild horse race." Rodeo people claim to love their victims, but untold numbers are injured and killed. The rodeo associations refuse to disclose injury reports. 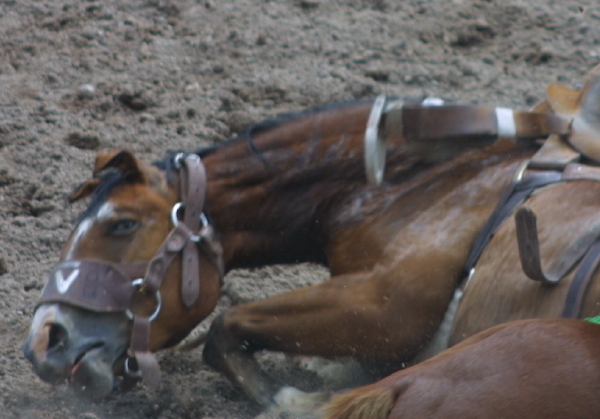 Another fallen victim at the Cheyenne Frontier Days rodeo, which was supported by Starbucks ad dollars. 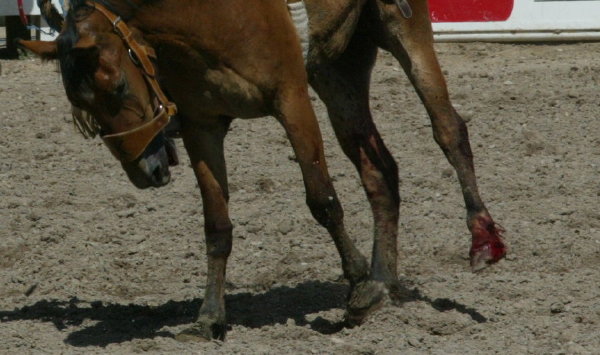 This horse was used in spite of an obviously injured rear hoof. 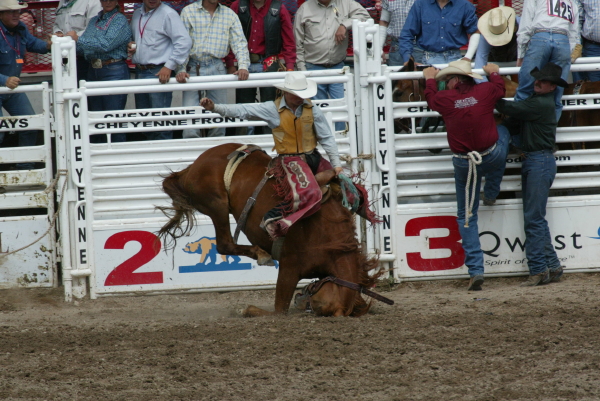 A horse is slammed face first into the ground. Please ask Starbucks to stop supporting the rodeo abuse of horses, calves, steers and bulls. 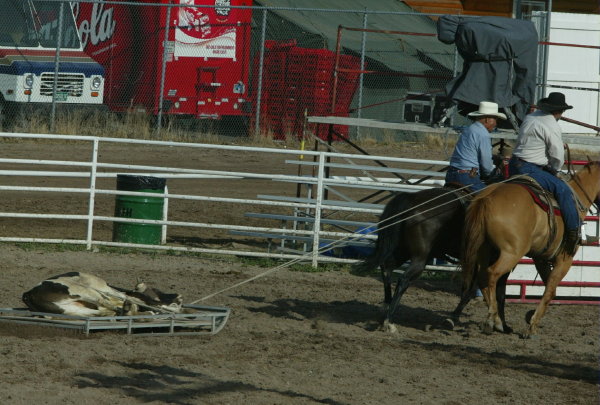 The Cheyenne Frontier Days, and indeed all rodeo, is clearly so horrific that Starbucks should no longer collude with and support such abuse.