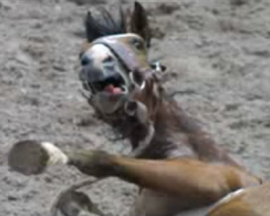 A rodeo association has agreed to pay $25,000 to an animal welfare group to settle a lawsuit over the improper removal of videos from YouTube that showed roped calves being dragged off to die and tasers being used on tame horses to get them to buck.

In December 2007, YouTube removed dozens of rodeo videos after getting takedown notices from the Colorado-based Professional Rodeo Cowboys Association that claimed copyright violations under the Digital Millennium Copyright Act (DMCA).

The group that posted them, Showing Animals Respect and Kindness (SHARK), with the help of the Electronic Frontier Foundation, sued the rodeo group last summer. The group sued for misrepresentation, alleging that the videos could not have infringed any copyright because the rodeos themselves weren't copyrightable, the EFF said.

The EFF announced on Thursday that the two sides had settled the case. In addition to the payment, the agreement requires the rodeo group to run any future copyright claims by its own general counsel and by SHARK before notices are sent to YouTube. It also bars the group from selectively enforcing a "no videotaping" provision against SHARK.

The settlement, which is available on the EFF Web site (PDF), is part of the EFF's No Downtime for Free Speech Campaign, which fights misuse of the DMCA.