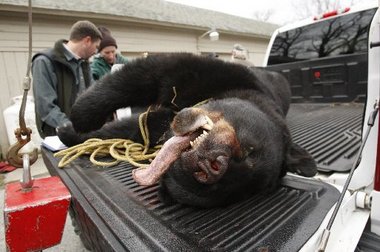 A 327.5 pound male black bear is weighed in at the Whittingham Wildlife Management Area by biologist Ross Shramko and Kim Tinnes, wildlife technician with NJDFW during the first day of the Dec., 2010 bear hunt.

STATEWIDE — When the crop circles first appeared on their Hampton Township farm in the mid-1990s, the Brodhecker family could not round up an explanation.

The formations, as much as 40 feet in diameter, were too big to be the work of raccoons. Deer typically don’t flatten crops as such. "We were like, what the heck is this?" Phil Brodhecker, the farm’s manager, recalls.