In a recent interview with CNN, Coca-Cola’s CEO Muhtar Kent stated, “I think we have to evolve it [capitalism] to make sure it is better socially connected to the people’s wishes and needs to create a better harmony in the world.”

Well we at SHARK have news for you Mr. Kent, sponsoring animal abuse events such as you do at the Cheyenne Frontier Days Rodeo, Reno Rodeo, and Pendleton Rodeo amongst many others (http://www.cokecruelty.com) is not moving forward to creating a more harmonious world or paying attention to the people’s wishes.

Newsflash Mr. Kent! We are moving rapidly towards a more compassionate society where animal abuse is no longer viewed as entertainment and since your share prices are dropping, nearly 8% since the closing high on July 30th, we suggest you put those dramatic words into action.

Rodeos these days are akin to the gladiator arenas of the now defunct Roman civilization where slaves and/or enemies were pitched against wild animals or each other. Like rodeos these “games” have been romanticized into skilled combat between heroic men when in reality they were pits of hell to thousands of humans and animals. Rodeos too have been romanticized where audiences imagine it’s a good ole American tradition of studly cowboys showing off their skills at “working” their animals where nothing could be further from the truth. 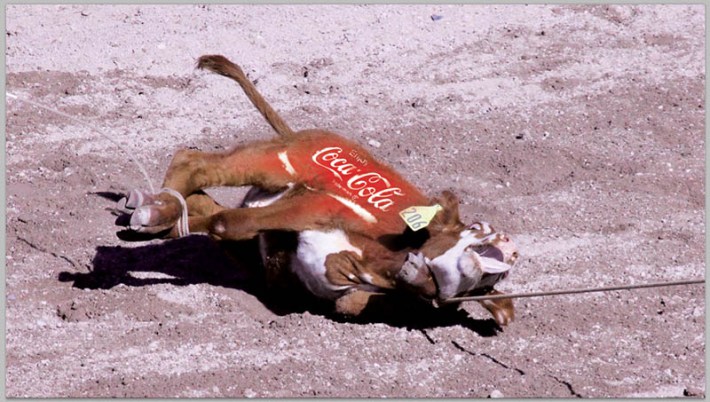 Drug abuse is rampant in both the participants and animals as in the case of young bull rider, Bryan Guthrie who died of an overdose in 2010 revealing the seedy underbelly of rodeos. Animals die or are horrifically injured on a regular basis and there is no turning away from the fact Mr. Kent, that if Coca-Cola wants to move forward then you need to pay attention to what you are sponsoring. We know that you love to ignore rodeo cruelty, pass the buck to your local bottling companies who also love to ignore the dead bodies being carted out of the rodeo rings, the illegal shocking of bulls and horses with electric prods, the terrorizing of horses in events like the wild horse race and the breaking of necks, backs and legs in the calf roping and steer busting events, but we know better. We know that the corporate Coca-Cola buck stops with you!

So lets revisit the official Coca-Cola policy on animal welfare, which states:

It would seem that Coca-Cola is a little confused about its own policy as clearly the rodeos we have filmed show not just a “risk” of physical harm but ACTUAL harm and death to many, many animals. Plus Coke is still a major sponsor of the Iditarod Dog Sled race where a whopping 50% of dogs do not make it out alive and that figure does not include all the unwanted dogs who did not “perform” in this grueling race of 1,100 miles to the obscene standard required and are killed. This race has long been extremely controversial due to its horrific treatment of dogs and yet Coca-Cola continues to sponsor it, blithely ignoring its own policy.

Recently some employees of Coca-Cola in South America rescued an abused horse from outside of the Coca-Cola factory. We would like to suggest Mr. Kent start behaving like his compassionate employees and maybe even start following his own policy!

SHARK is asking that if you care about animals, you boycott all Coca-Cola products until they stop sponsoring cruelty.