Watch the video showing the injured animals at the 2013 rodeo HERE. 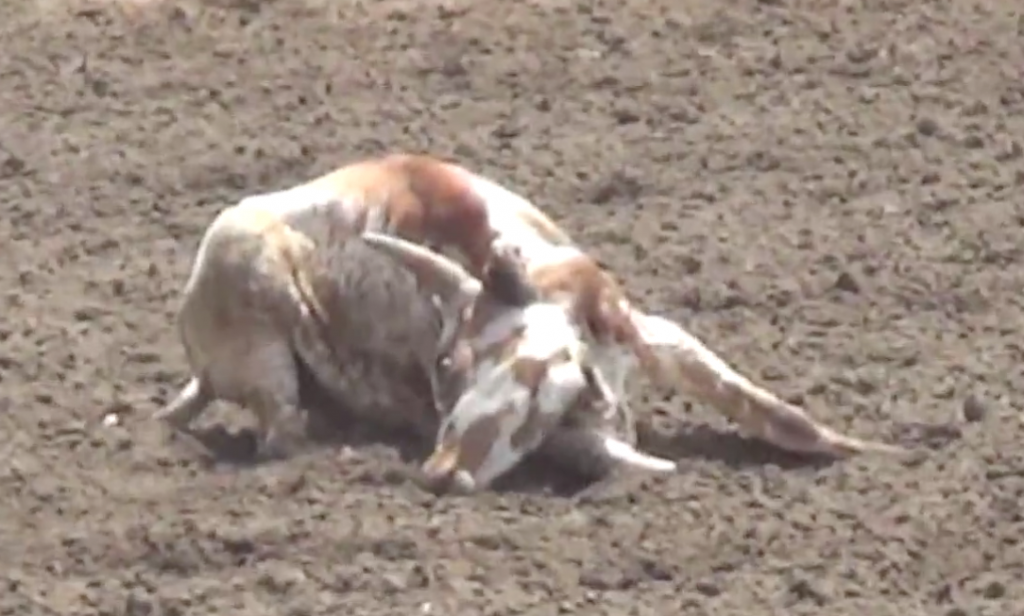 In his report of injuries that is mandated by state law, Eastman stated that only three animals were injured. SHARK, however, video-documented twenty-three animals that had been injured during the rodeo. A video showing each of these injured animals has been published on YouTube.

California law (4830.8 of the Business and Professions Code) states that,
"attending or on-call veterinarians at a rodeo event are required to report to the Veterinary Medical Board any animal injury at the event requiring veterinary treatment within 48 hours of the conclusion of the rodeo."

On the California Veterinary Medical Board website it states that "Anyone who witnesses or believes that a licensed veterinarian or unlicensed person's behavior or activities may cause harm (or the potential for harm) to animal patients or may be illegal, can file a complaint."

If Eastman allowed up to twenty animals who suffered visible injuries to go untreated, then his behavior caused them harm. If he did treat the animals, then his filing with the California Veterinary Medical Board was false. Either way, we believe he violated the law.

SHARK has also discovered that Eastman's ties to the rodeo may have played a significant role in him wanting to protect the public image of the rodeo by downplaying the cruelty present at the rodeo. According to the California Rodeo, Inc.'s 2011 IRS form 990, Eastman was not only listed as being on the Board of Directors, but that he had family members on the Board as well. The document can be downloaded HERE.

Tim Eastman, Board Director and Veterinarian for the California Rodeo Salinas, seems to have cared more about the well-being of the rodeo's public image than about the suffering of nearly two-dozen animals. That's the brutal nature of rodeo. It is long past time that the veterinarians who whitewash rodeo cruelty are held accountable for their actions.

The two complaints can be viewed on the following links: 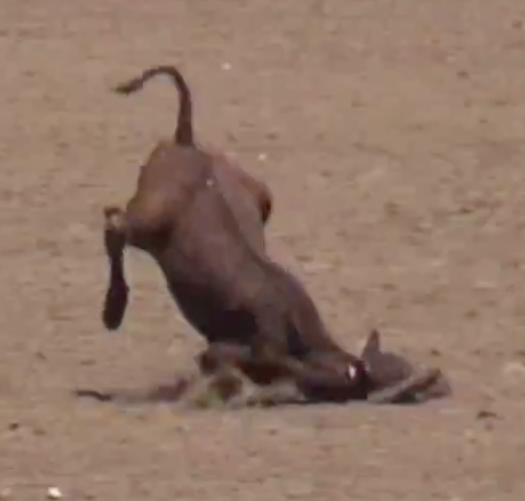 Another animal injured at the rodeo

At the barnyard scramble held in Martinsville, IL, young animals were brutalized as hordes of rampaging children grabbed, kicked and dropped them to the ground. 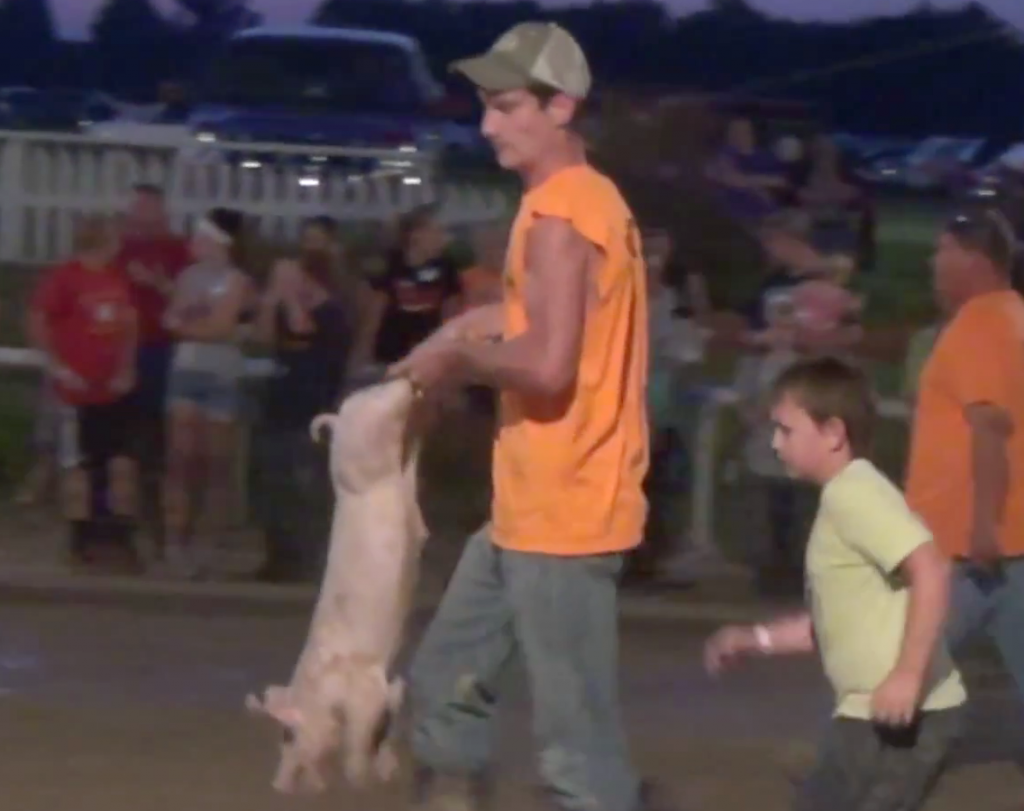 The Illinois Department of Agriculture is supposed to enforce the Illinois Humane Care for Animals Act, but rarely does its job.

Please contact the Department and insist that these people be prosecuted to the fullest extent of the law.

Phone: 217-782-2172
Email: This email address is being protected from spambots. You need JavaScript enabled to view it. 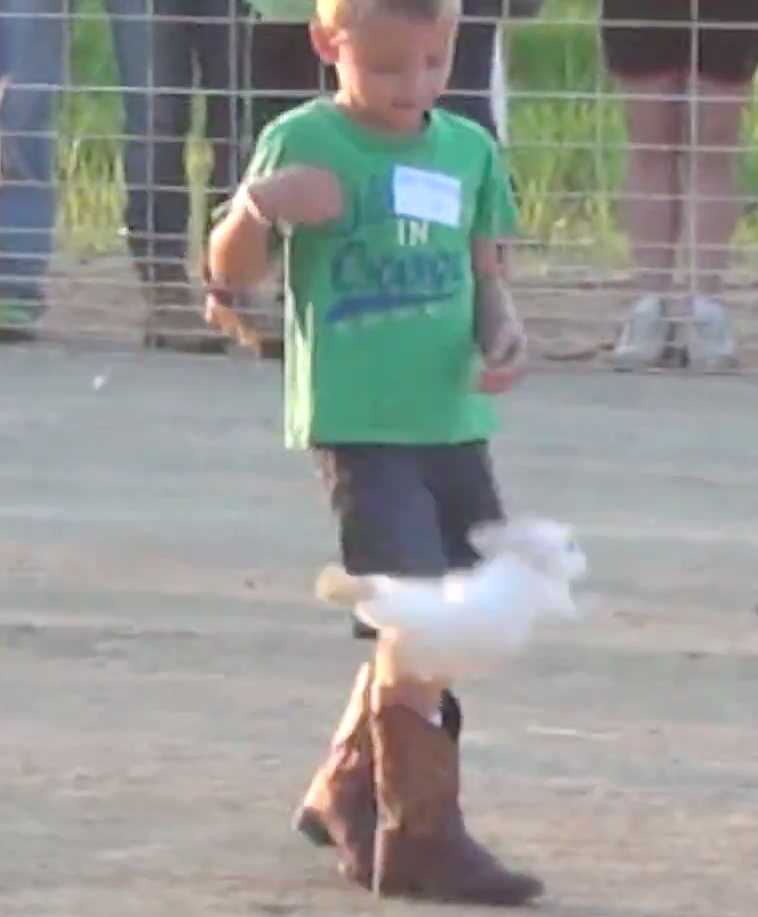 This young child dropped the rabbit to the ground.

Oregon Rodeo so Violent, YouTube Bans Children from Watching it

On July 13, 2013, SHARK videotaped a horse tripping event held at the Harney County Fairgrounds in Burns, Oregon. On August 3, 2013, SHARK published a video exposing multiple acts of horses having their legs roped and then crashing to the ground. The horses often struggled terribly to get back up.

On August 16, 2013, SHARK received the following notice from YouTube about this video: 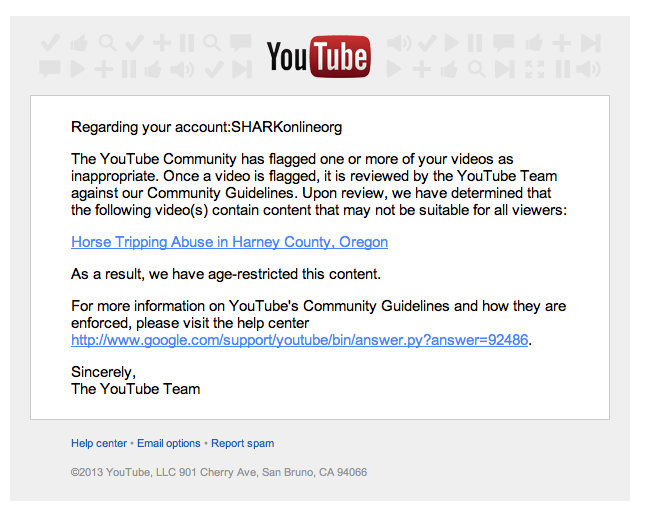 The only thing this video shows are horses being hurt at a public event. That the largest video sharing website in the world has declared that that footage is so disturbing that children shouldn't see it fully exposes how violent and inappropriate rodeos are. They are not family entertainment. They are modern gladiatorial events where rodeo thugs brutalize innocent animals for the crowd's pleasure.

SHARK sent the following letter to Harney County Commissioners Pete Runnels and Dan Nichols asking that, due to their violent nature, no children be allowed to attend future rodeo events at the county fairgrounds.
...

My organization, SHowing Animals Respect and Kindness (SHARK) videotaped a horse tripping event held at the Harney County Fairgrounds on July 13, 2013. What we captured on video was animal abuse of such a powerful and disturbing nature, that YouTube has deemed it inappropriate for children to view.

I strongly encourage you to view the video, so you can see for yourself the violence that was committed at the county fairgrounds.

Because of the violent animal cruelty, and because children should be protected from seeing such brutality, we are calling on you to age-restrict those who attend future rodeo events at the Harney County Fairgrounds. If you care about the mental health and well-being of children, you will take action to protect them.

Please contact Commissioners Runnels and Nichols and ask that
they explain why they allow children to watch such violent
events such as horse tripping.

County Commissioner
Pete Runnels
Email: This email address is being protected from spambots. You need JavaScript enabled to view it.

County Commissioner
Dan Nichols
Email: This email address is being protected from spambots. You need JavaScript enabled to view it.

Local Activist Gets Home Depot to Withdraw Support for Rodeo

The following was sent to us by James Leon of Orange County, California. It tells the story of how he got Home Depot to withdraw support for a rodeo.

One day I happened to see an advertisement on the street for the Rancho Mission Viejo Rodeo in San Juan Capistrano, California, which is very near my home. The rodeo is set for the weekend of August 24th, which gave me some time to act. I did just a little research and found that the infamous Flying U Rodeo Company was involved with this rodeo and having seen SHARK's rodeo videos, it sent chills down my spine. Living in Southern California, I have little influence over the outrageous tragedy of the Pennsylvania pigeon shoots, but living just a few miles from this rodeo maybe would afford me greater impact.

I visited the rodeo's web site, RMVRodeo.com, and found some major corporations on their list of sponsors including Home Depot and Cox Communication. I decided to email both companies noting myself as a long time customer. My first thought for getting meaningful action was finding some wedge to get noticed. So I found email addresses associated with both companies' "investor relations". I also CC'd one local news organization in each email thinking, perhaps including local newspapers or local TV news outlets would add some perception of consequence. My emails were polite and expressed dismay that they were sponsoring animal abuse. I provided links to YouTube videos by SHARK and a link to SHARK's web site expose on Cotton Rosser. The emails emphasized that these animals were being abused and sometimes killed merely for entertainment and worse, "family" entertainment. And I asked them to imagine THEIR company name displayed on a banner in the background as an animal is being abused, suffering, and possibly dying in fear and pain.

A few days past and I was pleased to get a non-automated response from both companies asking for my telephone number so they could call me to discuss this directly. I think the purpose of the phone contact was to gauge what kind of "nutty" I might be. I feel pretty confident that I come off as a very reasonable, rational person,so I welcomed the phone calls.

The Home Depot representative in particular expressed a negative personal opinion of the rodeo and a personal desire to see the sponsorship dropped. He said that my objections were being escalated within the company and he felt such sponsorships by Home Depot would be discontinued by new company policy.

A few weeks later I checked the rodeo's sponsorship web page and was delighted to see that Home Depot was nowhere to be found! I'd like to think that I had something to do with this, but the simple removal of their sponsorship is more than I expected. It gives me renewed hope that positive change CAN happen and it's mostly a matter of tactics.

So here's my strategy: Focus on the main sponsors, the ones with their logo displayed on the web site and advertising for the rodeo. Focus on large public corporations likely to have an investor relations department. Try to get local media involved as a potential "news" story. Always be respectful.

I personally thank SHARK for their extraordinary work and for being a class act. It's not just a name to me, it's a way of life. I'm a former United States Marine and I think if you don't show animals respect and kindness, you probably don't do that for people either.

On August 7, 2013, a bull that escaped from a pen at the Dakota County Fair was shot twice by a county sheriff deputy. According to this story, the bull was later taken to a slaughterhouse.

From the Dickinson Press:

"When the 1,200-pound bull that escaped from a pen during the Bulls and Barrels event at the grandstand Aug. 7, 20 to 30 people chased the animal in an effort to get it to stop."

This frightened the bull, who then broke through a fence and into the fairgrounds. A deputy then fired twice at the bull.

"The shots were fired at close range, Bellows said. In handgun training, deputies are trained to assess the backdrop -- that is, where the bullets might strike -- and in this instance, Regis told Bellows he was certain the bullets struck the bull. Photos taken of the bull afterward showed evidence of blood on the animal, which leads deputies to believe the bullets hit the bull."