The Cowtown Rodeo in Pilesgrove, NJ hosts a weekly PRCA-sanctioned rodeo during the summer months. Every single time that SHARK investigators attended the rodeo they documented rodeo thugs shocking horses to make them perform. In 2013, after being electroshocked, a horse died on the arena floor:

Video of Cowtown Shocking in 2008

What's especially disturbing about the Cowtown rodeo, in addition to the obvious cruelty of shocking horses, is the device used to shock the horses. Cowtown thugs use a three-foot long prod that delivers a very powerful charge of electricity (8000-10,000 volts) to the animals. So much electricity in fact that even the PRCA's own notoriously lax humane laws BAN the use of this device. 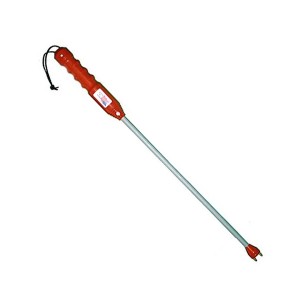 SHARK documented and exposed the Cowtown rodeo in 2008, 2009, 2010, 2012, and 2013 for using this exceptionally cruel device...but nothing has changed. The last time SHARK investigators attended this rodeo, the troll hiding behind the chutes was still shocking the hell out the innocent horses. So much for the PRCA's claim that their rules are worth a damn. If Cowtown proves anything, it's that those rules are worthless as evidenced by the continued use of the banned prod.