How corrupt are the police in Oklahoma? Two county sheriffs and the head of the OK Department of Public Safety are refusing to even acknowledge, much less respond to daily requests for law enforcement at the upcoming live pigeon shoot fundraiser for Senator Jim Inhofe.

You may remember Inhofe as the guy who held up a snowball on the senate floor to disprove global warming. Unfortunately, Senator Inhofe is more than just a buffoon. He is one of the most corrupt politicians in the country, and he is an animal serial killer.

Besides refusing to deal with upcoming cruelty and lawlessness, Oklahoma law enforcement has refused to take any action against Inhofe’s past crimes which SHARK has documented over the past two years. SHARK reported these violations to the Oklahoma Department of Public Safety, as well as to the Kiowa County Sheriff’s Department, where the 2014 pigeon shoot was held, and the Greer County Sheriff’s Department, were the 2015 shoot was held. Though we have made repeated requests for investigations, nothing has happened.

We’ve been sending our requests for a police presence at the upcoming Inhofe slaughter on a daily basis since mid-August of this year, yet no-one from any of these policing authorities has had the decency to even acknowledge our requests.

This is the email we have sent to the OK Commissioner of Public Safety. The only response we have received after 15 attempts were two automated emails telling us he was out of state

Here's another example of police corruption: Two Kiowa County Sheriff Deputies were hired by Inhofe as security for the 2014 pigeon shoot. Ryan Jackson, Senator Inhofe’s Chief of Staff, said the following in The Journal Record on September 3, 2015:

"Jackson also said that despite calls to law enforcement, the local sheriff’s department did not have any questions about the event. Instead of investigating, Jackson said, the deputies provided security.”

It was incredibly brazen for Jackson to admit that law enforcement was there to work for the campaign and not to enforce the law, but that’s how the system works in Oklahoma.

Please politely and respectfully email Oklahoma’s law enforcement agencies and ask why Senator Inhofe is not being held accountable for his illegal acts:

Michael C. Thompson, Commissioner for the Oklahoma Department of Public Safety
This email address is being protected from spambots. You need JavaScript enabled to view it.

Devin Huckabay, Sheriff, Greer County
This email address is being protected from spambots. You need JavaScript enabled to view it.

Brynn Barnett, Sheriff, Kiowa County
This email address is being protected from spambots. You need JavaScript enabled to view it.

Please let us know of any response you may receive. 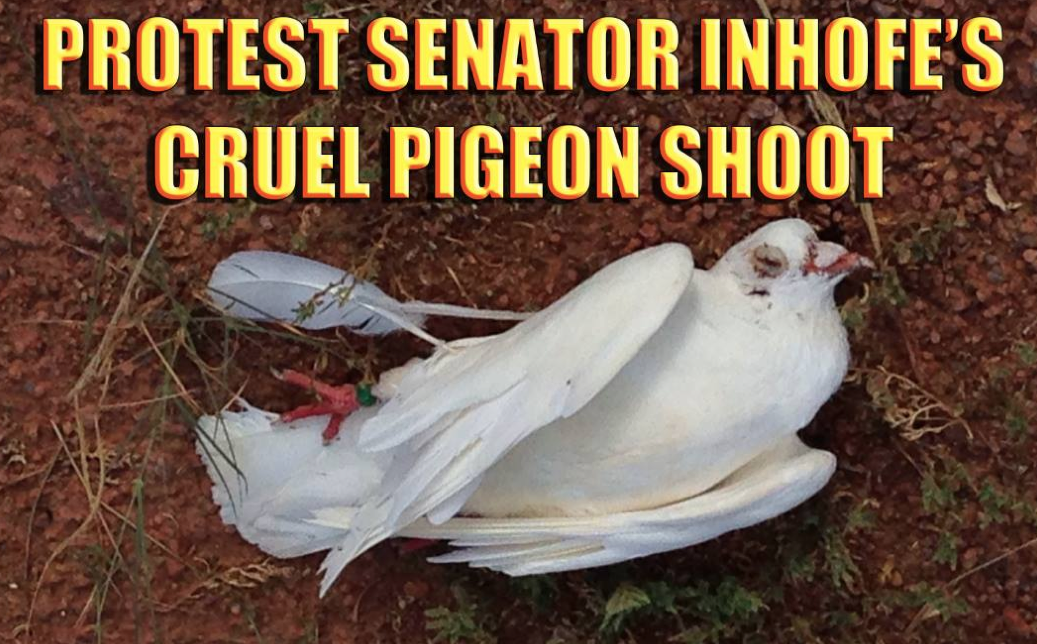 Please continue to share our Facebook event for the Inhofe pigeon shoot protests on September 9 and 10 in Oklahoma. Anyone who cares about animals, the environment, corruption and human issues should attend to stand against Inhofe.

Please email This email address is being protected from spambots. You need JavaScript enabled to view it.  if you will be there with us.

The Cheyenne Frontier Days Rodeo (CFD) is the world’s most cruel rodeo, but you wouldn’t know that from watching television news reports or reading the local newspaper in Wyoming.
Watch our video showing cruelty at the 2016 CFD HERE
Although we have documented an enormous amount of animals being injured and killed at CFD, the media in Cheyenne, and throughout Wyoming has ignored all of our video evidence, and instead run fluff piece after fluff piece hyping the rodeo, including this travesty: Animal safety a priority at Cheyenne Frontier Days in the Wyoming Tribune Eagle newspaper.

Animal safety a priority? CFD allows brutal “jerk downs” where calves, who are just a few months old, are roped around the neck and thrown backwards landing on their necks. Jerk downs are supposed to be banned, but they don’t care about that at CFD, as OUR VIDEO proves.

This poor calf was the victim of a brutal jerk down. This is supposed to be banned, but CFD just doesn't care. Unfortunately, the Wyoming Tribune Eagle doesn't care either